I was brought up in a Georgian manor house in Co. Durham. It was an upstairs/downstairs way of life, now more or less vanished. As a child in the nursery wing behind the green baize door, I had access to both worlds: the ‘downstairs’ kitchen world, appropriately down the back stairs, or the ‘upstairs’ world, via the front stairs. As a child, this double-vision had its problems – different accent, different ways of thinking, for a start; on the other hand, it was undoubtedly eye-opening and taught me, from an early age, that people could think very differently about things. Living in a country house can also be a splendid place for an imaginative child; the attics were full of stuffed animal heads, furniture no longer used (an old linen press, for example), and ancient weapons. Outside, there was a walled kitchen-garden, a pets’ graveyard, and a moat. On rainy days, I wrote poems and stories or I read my way through much of my grandfather’s 19th century library.

I was very happy at my first school in the wilds of upper Teesdale (it had no electricity) where I told stories after lights out. My next school, Cheltenham Ladies’ College, was hellish; I survived by writing novels – which came in handy when, many years later, I was invited to give the annual Lord Chesterfield lecture at The Ranger’s House in Blackheath. I decided to use my Juvenilia in a ‘How I became an Historical Novelist’ talk, and they turned out to be hilarious in a way my teenage self never intended.

After Cheltenham, I went to Paris to be ‘finished’ but, thanks to the support of Madame P. who insisted that I was intelligent, I ended up at the Sorbonne. Subsequently, having crammed my A levels, I read English at the University of Sussex; did a Post Graduate Certificate of Education; and embarked on Life. I married and, with my husband, co-founded the fringe theatre company Incubus and, later, the touring company TheatreMobile for which I directed and wrote plays, one of which opened the Leeds International Children’s Theatre Festival.

Once my children arrived, a life in theatre became much more difficult, so I turned back to writing novels, with part-time teaching to help pay the bills. Later, to stop myself worrying about my children’s ‘A’ levels, I did an MA in Victorian Studies at Birkbeck College.

I have had a dozen historical novels published, together with Getting the Point, a punctuation guide for adults co-authored with Jenny Haddon. I am a member of the Islington Writers for Children, the Historical Novel Society, for whom I review books, and of the Romantic Novelists’ Association. And, since 2016, I have been blogging every Sunday on things which interest me, mainly historical and/or arts related, which I enjoy. My latest project is to get my 10 historical novels backlist into e-books; so far I am nearly half-way through. 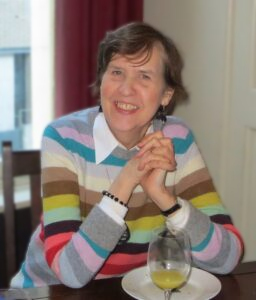 I love travel and history. My idea of heaven is a pile of interesting books to read, a ruined Greek temple nearby, Mozart to listen to and a meal with friends in the evening. Oh, and I wouldn’t mind if Rupert of the Rhine, John Donne or Lord Byron dropped round later – for conversation, naturally.