The Great Laxey Wheel, opened in 1854 – named ‘Lady Isabella’ after the wife of the mid-19th century Governor, the Hon. Charles Hope, – is probably the Isle of Man’s most recognized landmark and its most important piece of industrial archaeology. 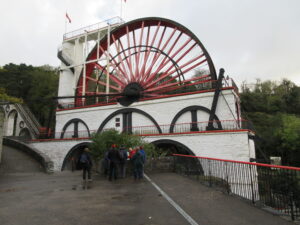 Much though I love impressive examples of industrial archaeology – and you must admit that the Lady Isabella is impressive – I always find it difficult to follow explanations of exactly how the machinery works; sooner rather than later, a word is mentioned – like ‘ore’ and I find myself thinking – what is ore, exactly. So I shall interrupt my post with definitions of industrial archaeological words other people may have problems with, as well as me.

Ore: a metal combined with other substances within a rock or mineral base. In other words, once you’ve removed the earth, you get to the bedrock; this can be  stone, like granite, say, or it can be a native mineral containing a precious or useful metal (like lead or zinc) in such quantity or quality as to make its extraction profitable. This is ore: lead ore, iron ore etc. Ore looks like a dirty, messy lump and it will need crushing, washing and smelting to extract the desired mineral.

The first process the ore had to go through was the Washing Floors. This employed a large number of women and my instant mental image was of a Gilbert & Sullivan operetta with a lot of singing women, brooms in hand, washing and cleaning wooden floors. 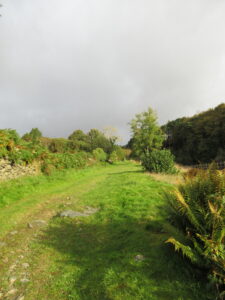 The scenery today – a lot cleaner, for a start!

The truth in the mid-19th century was a lot dirtier and out in the open air (it was freezing in winter) and the pay was pitifully small.

The process: The ore which came out of the mine had to be crushed by huge machines powered by waterwheels and then sorted by hand and the useful lead and zinc ores extracted. A contemporary photograph showed a huge pile of ore on the left which has just been extracted and dumped there awaiting treatment. A middle pile of ore was plonked on top of wooden boards placed over the river – these were the ‘washing floors’ . And getting the ore clean must have been a backbreaking task. And I’m still hazy about exactly how it was done. 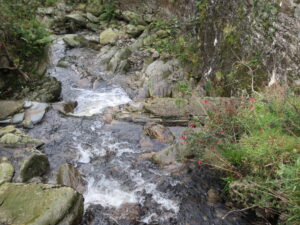 Today the water is clean, back in 1845 it was a very different matter

The next process was Smelting: This is when the ore is heated to drive off any impurities and leave a pure metal. Smelting was not carried out on the Isle of Man – which has no coal, instead the ore was sent to Swansea in Wales to be smelted.

However, back to the Lady Isabella waterwheel. The problem from the beginning was the mine’s tendency to flood. The Isle of Man had no coal, so using steam power to deal with the flooding was not an option; on the other hand, water was plentiful with fast flowing streams up the Glen Mooar Valley. The engineer Robert Casement came up with a masterstroke; he would dam the Glen Mooar valley in which the Laxey Wheel sat, and create a network of lades to power a much bigger waterwheel – and his intended wheel would be over twice the size of the original.

Lade: An artificial channel built to take water wherever it may be needed. (Not to be confused with lode – which means a vein of metal ore.)

Today, Lady Isabella is the largest working waterwheel in the world. 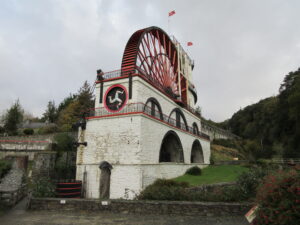 Furthermore, Casement’s ambition stretched further still; not only was the Lady Isabella waterwheel the biggest, she was designed to make a statement. She would stand out – literally. The colours: black, white and scarlet were carefully chosen for maximum impact.

A huge roundel of the three-legged treskelion – the three silver armoured legs with gold spurs which is the symbol of the Isle of Man – is prominently displayed on the front of the structure and it plainly says: I represent something of importance! 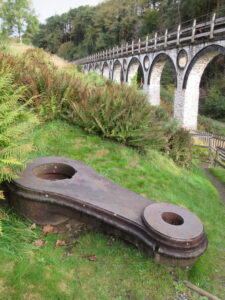 Looking at the Laxey Wheel from the other side, there is a huge ‘spare’ crank shaft abandoned on the grass just upstream of the Lady Isabella. What is it doing there? We don’t know, but it certainly gives the passer-by ample evidence of the size and scale of the Laxey Wheel’s structure.

The Laxey Wheel didn’t need to have been so elegantly designed with its arches, black wrought iron railings with scarlet handrails, and so on. It was meant, from the first, to emphasize that here was something Manxmen could be proud of. Furthermore – it was unique; it was the biggest wheel and the best. 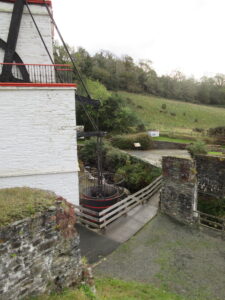 Visitors can climb up the winding stairs and get to the top level – where there are splendid views. Or you can walk up the valley – no longer dirty and smelly, but with streams, ferns, late-flowering fuchsia and fantastic views. There was even a late butterfly or two. 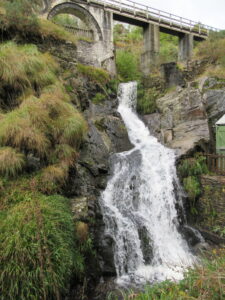 I loved the waterfall. 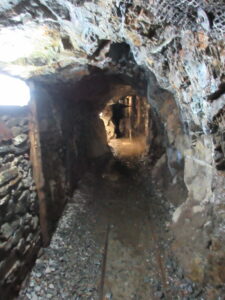 The adit – the entrance to the mine: don’t forget your helmet!

Adit A horizontal entrance to a mine.

Walking upstream from the Laxey Wheel you reach the entrance to an adit which visitors are allowed to go inside for a short way – providing you put on a helmet because you have to stoop. However, I didn’t stoop quite enough and there was a sudden bump as my helmet met the roof – fortunately, I was fine but it reminded me that, in the 19th and early 20th centuries, health and safety was not a major concern to the mine’s owners. 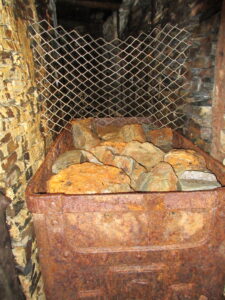 Thus far and no further! It was getting damp underfoot, so I was happy to turn round.

At the end there was a wagon full of chunks of ore – the yellow colouring seemed to indicate iron ore – but I may be wrong. 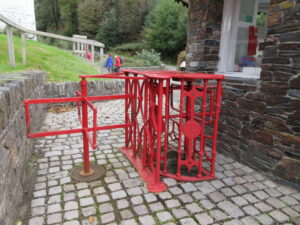 Even the scarlet wrought ironwork entrance and exit makes a statement!

I really enjoyed my visit to the Great Laxey Wheel; I’d never seen anything like it before and I rather like machinery – my great-grandfather was a railway engineer on the Stockton-Darlington Railway  which may account for it!

7 thoughts on “Isle of Man: The Great Laxey Wheel”