The exciting BODY VESSEL CLAY exhibition at 2 Temple Place looks afresh at one of the world’s oldest forms of the humble domestic water pot and its development from traditional pots which are serviceable for cooking and eating, to wonderful new forms, re-imagined with sophisticated new techniques which question age old gender assumptions and become works of artistry in their own right. 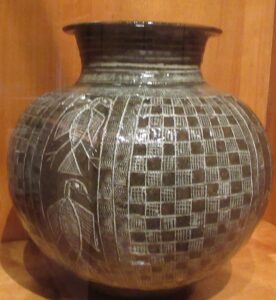 To give a quick overview: the exhibition’s subtitle is BLACK WOMEN, CERAMICS & CONTEMPORARY ART and it looks at what happened to the art of Nigerian pottery, which, until Nigerian Independence in 1960, was mainly viewed as a traditional female pursuit; that is, the making of large round earthenware water and storage pots, plates, bowls and so on for everyday use. The fact that the pottery objects themselves were beautifully crafted and decorated was not considered as worthy of comment; domestic pottery was just what Nigerian women did – and had done for hundreds of years; it was allotted little status. 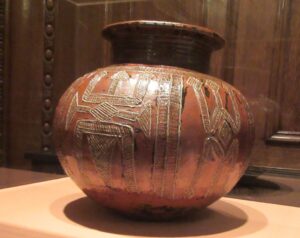 It was 1960 and, whether Britain liked it or not, the Second World War had changed everything. India had gained her independence in 1947 and now Britain’s African Colonies were clamouring for Independence, too. Suddenly, there were an number of other factors  – initially political, intent on being heard. Britain’s view was that independence should happen in a controlled way which did not rock the British boat; she did not want Nigeria to go headlong for industrialization. Nigeria, itself, of course, might have quite different aims. 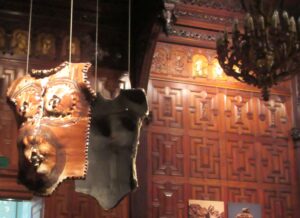 I found the clash of assumptions aspect of the exhibition fascinating. For example, the exhilarating way that Phoebe Collings-James work engages with the Gothic decoration of the wood panelling behind her hanging breastplate; her work echoes both the architect’s display of sumptuous carving and, at the same time, challenges it. Both, to my mind, come off with flying colours – it felt to me that both potter and wood carver might have enjoyed the encounter.

The original catalyst for Nigeria’s post-war development with regard to pottery was  Michael Cardew (1901-1982). He was a superb professional potter, trained under Bernard Leach, who was appointed Senior Pottery Officer to the new Nigerian Government. Cardew was a high-minded, austere man who was all for Nigerian independence – but he also believed that this should happen in a way that benefitted Britain. He admired the traditional Nigerian designs and he had developed new techniques in pottery which were more cost-effective and his job, as he saw it, was to train young Nigerian men as potters who would establish small potteries all over the country which would expand into new markets. As Nigeria’s new middle-class emerged, people would, naturally, be eager to buy the new, and improved – yet traditional – pottery.

Except they didn’t. And young Nigerian men weren’t exactly queuing up to be trained, either. Why would a young Nigerian man want to become a potter in the first place – a skill which had little status? All you needed was mud for the pottery and a hole lined with wood, dung, dried leaves and so on to fire it. Anyone could do that – even a woman!

The exhibition sets out to challenge this, and we see below: 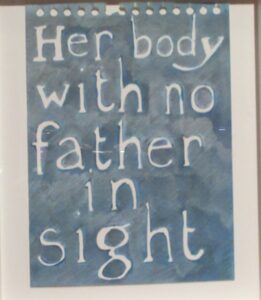 To come more up to date; Jade Monserrat (born 1981) is shouting out her frustration: why should I submit to male values and opinions of what is good pottery and what isn’t? She is asserting that she’s quite capable of discovering things for herself.

Hurray for Jade, I found myself thinking!

Right from the start of the exhibition, I, too, found myself asking awkward questions. My first thought was that Cardew was surely extraordinarily naïve in what he was trying to do. Why would a newly- liberated country want to buy pottery which – from the Nigerian point of view – looked very like the traditional stuff their mothers and grandmothers had been producing for generations. Same old, same old. Surely newly-rich Nigerian customers would want new colours and designs? And they wouldn’t necessary come from Nigeria. 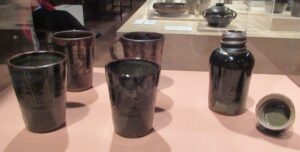 Having said that, I loved the everyday Nigerian objects on display: the plates, bowls, water-bottles (which had ceramic tops which screwed on – how on earth did they do that?), small casserole dishes, beakers and so on. I’d be happy to give any of them a home in my kitchen. 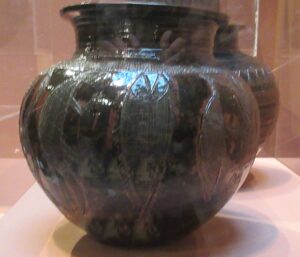 And I loved the stylized animal designs on the objects: fish, lizards, chameleons, scorpions and so on – a lizard, for example, with its hard triangular shapes, can pack a design punch which could never be achieved by a European rabbit!

And what of the ceramic armour? I found myself wondering if it was challenging the cultural burden of Classical History from the Ancient Greeks onwards? Do women really have to imitate – as far as they are able, poor things – the glories of the Ancient Greek Bronze Age with its superbly decorated armour? 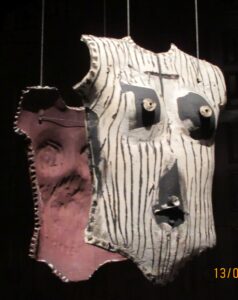 The women potters in the exhibition have other ideas: could they be arguing that they don’t have to cram themselves into an alien way of thinking? They can judge for themselves if it fits them  – or if it cramps them. While I was there a group of young Black schoolgirls were animatedly talking about the hanging breastplate and backplate.  ‘It’s a bit of a mess,’ said one. ‘Perhaps it’s OK if it isn’t perfect,’ suggested their teacher.

It was a new idea and the girls’ conversation argued about it enthusiastically. 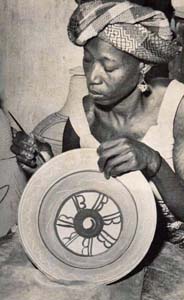 But the exhibition is really there to celebrate the genius of the astonishing Ladi Kwali (1925-1984), the first woman Cardew trained, and the first female potter in Nigeria to achieve world-wide fame. She changed everything. It swiftly became obvious to Cardew that her skill was outstanding. But, although he himself acknowledged Ladi’s skill, somehow, she never really got the help she needed which  would have enabled her to make her mark on the world much earlier.

I love her work – now in museums and galleries all over the world – but there are still awkward questions to be asked and answered – those of gender politics. 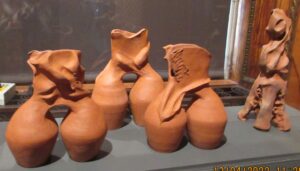 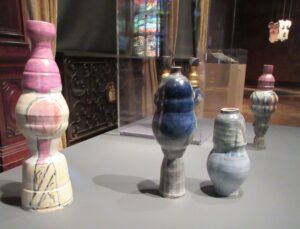 Shawanda Corbett’s colourful ceramic figures have something new and lively to say to us, too!

I loved the visual and performance artist Shawanda Corbett’s colourful, sculptural ceramics which are engaged in communicating with both each other, and with us, the viewers.

Going round the exhibition is a bit like being flung into a sort gender ferment: looking at both the pottery and the photos of women potters of all ages, one could tell that they were up in arms, insisting on doing things their way, pushing boundaries and asking new questions.

I want to end with a little vignette: I was very impressed by a class of Black schoolgirls (roughly 10-12 years old) who were there with their teacher. She was flinging around words like ‘tactile’ and I found myself thinking, isn’t ’tactile’ a bit beyond them? But I was quite wrong. As I listened to the group  discussing the exhibition, it became obvious that their teacher had thoroughly prepared her pupils linguistically for the visit. The word ‘tactile’ didn’t faze them. Then she chucked in a new word: Do you know what ‘empathy’ means? She then explained it (and ‘empathetic’) and then began to use the word. Soon they were all joining in unselfconsciously.

I found myself thinking: you get a gold star from me! Not only had she taken her pupils to what might be considered a challenging exhibition – but one with a lot to offer them, she had also given them the verbal equipment to enable them to discuss and work out what they thought with their classmates. It would serve them for a lifetime.

All in all, this year’s exhibition offers the viewers something both different and challenging, but also immensely invigorating. I loved it.

It closes on 24th April.