This week I’m looking at two pairs of mid-19th century ladies’ open crotch drawers which you can see hanging on my washing line in the photo below. As an historical novelist, I need to know what my heroines are wearing, even, or perhaps especially, the undergarments. They affect her posture, her comfort and indicate her status. 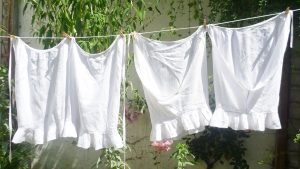 These are almost, but not quite, identical, and are made of fine cotton, decorated with broderie Anglaise where the legs end and on the added frill. The two legs are joined only at the waist band and a long cotton drawstring threads through the waist band and ties at the front. Example A, on the left, has long drawstrings; Example B, on the right, has very short ones. 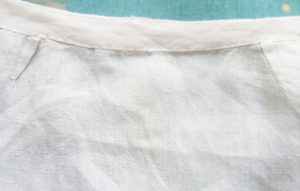 Example A. Note the identical small tucks at the waist band

They are also hand made. How do I know? Mainly because they are not quite identical and Example A (on the left on the line) is rather better made. Either the owner learnt how to make the drawers in Example B and honed her skills later with Example A; or she took a lot of care to get Example A just right and ran out of time with Example B – or simply couldn’t be bothered. 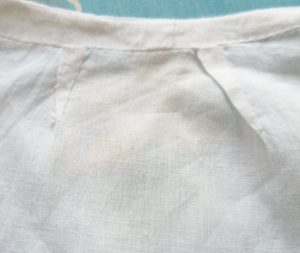 Example B. The tacks vary in size hugely.

Second clue: the legs. Underwear made of cotton or linen was more common in the mid-19th century – later silk and wool was also used and the amount of embroidery increased. The legs here have a small band of broderie Anglaise above the end of the leg and a broderie Anglaise frill below. The designs aren’t quite identical. My guess is that these undergarments were made before the advent of the sewing machine. 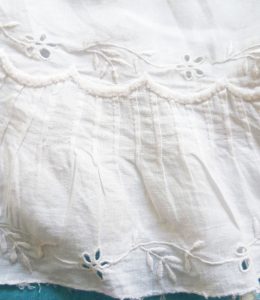 Example A: the leg decoration

Note how carefully the pin-tucks are sewn. It must have taken hours to do (and it was very fiddly to iron). 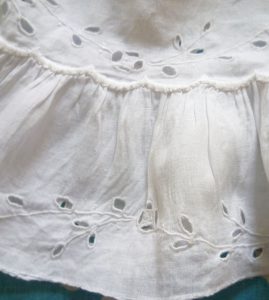 Our sempstress hasn’t bothered with pin-tucks here, she’s just gathered it together any old how. And the scalloping is possibly less neat. But who cares? Nobody else will see it. 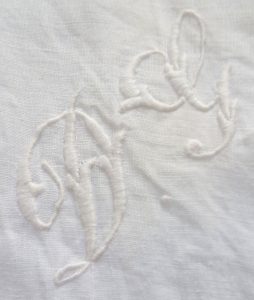 Example A – the initials are nicely spaced

Both pairs of drawers have the very ornamental initials DG elaborately sewn low down on the right thigh. This is interesting and allows me to do a bit of historical name research. Strangely, there are no girl’s names beginning with D in the top fifty girls’ name lists in either 1850 or 1875. However, there were a few girls’ names beginning with D which appeared occasionally: Dinah, Deborah and Dorothy, for example. 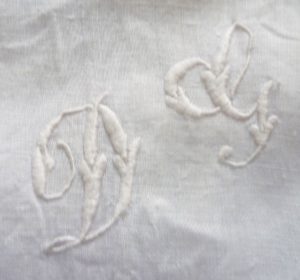 Example B – the initials are rather too far apart

Dinah and Deborah are Old Testament Bible names and one might expect a few of them at this date – but they would be unlikely in an upper-middle class family. For example, Dinah, the heroine of George Eliot’s Adam Bede (1859), is a Methodist preacher, and Deborah Jenkyns, the formidable sister of the gentle Mattie in Mrs Gaskell’s Cranford (1851-3), is a poor clergyman’s daughter. The third name, Dorothy, was considered old-fashioned by the mid-19th century and had largely dropped out of use. Henry Tilney, when teasing Catherine about the horrors that awaited her at Northanger Abbey, speaks of ‘Dorothy, the ancient housekeeper’ who tells her that the abbey is undoubtedly haunted….

So, on the evidence, the drawers are hand-made, sometime in the mid-19th century and they belonged to a slim woman who was able to afford good quality cotton and who could do broderie Anglaise and whose sewing was adequate – when she concentrated… As for her name – the initials DG are all we have. I’d love to give her a name.

6 thoughts on “A Victorian Lady’s Drawers”