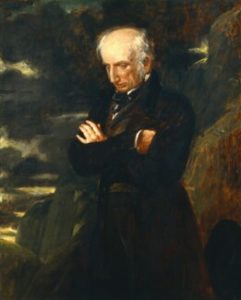 Haydon, alas, spent much of his life working on huge canvases which he then found it difficult to sell. He also had a very unfortunate manner: bombastic, argumentative and tactless and, worst of all, he couldn’t keep out of debt.

On the plus side, Keats admired him, and wrote a sonnet: Address to Haydon and praised his, ‘High-mindedness, a jealousy for good …a singleness of aim.’ 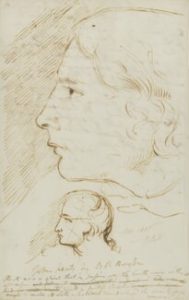 If only he’d painted as well as he wrote. As a writer of historical novels, I’m interested in how men really think about love – and I suspect that it’s not the same as the thoughts and words that many female novelists put into their male characters’ mouths. Luckily, Haydon’s  diaries come across as totally authentic; he has the gift of being able to capture the moment in words. He allows himself to be completely open in his diaries so I will let him tell us, in his own words, how he feels about ‘the Girls’.

Haydon liked sex as much as the next man. In April 1813, he wrote: ‘I felt this morning an almost irresistible inclination to go down to Greenwich and have a delicious Tumble with the Girls. … After a short struggle, I seized my brush, knowing the consequences of yielding to my disposition, & that tho’ it might begin today, it would not end with it.’ 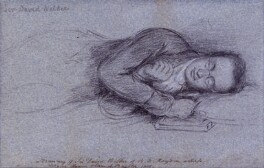 He was twenty-seven and beginning to look for something more than a quick ‘Tumble’. In August, he wrote: I begin to be weary, heartily weary, of vice. There may be pleasure in guilty enjoyment, for fear of discovery, & snatched in the hot, icy fury of passion, yet surely the confidence, the rapture of legitimate pleasure with a lovely creature, is a million times more exquisite.’

In April 1815, he meets a girl he fancies. It is evening; he is ‘accidentally’ alone with her:

‘She sits – you venture to sit near her! You slip gently from the edge of your own chair to the edge of hers, which you affect to conceal! and which she affects not to see! an involuntary sigh; you put your arm on the back of her chair without daring to touch her lovely shoulder – awed, for fear of offending, you dare, agitated and shaken, to touch her soft hand! She withdraws it not! You press with a start of passion the gentle, helpless hand to your full and burning lips!’

It reminds me of the Goin’ Courtin’ song in the film Seven Brides for Seven Brothers:

‘You sidle up, she moves away/ Then the strategy comes into play.’

And this is what happens next:

‘Your floating eyes meet hers, looking out under her black locks with lustrous tenderness. Down sinks her lovely head under your heated cheek, and you feel her heavenly breath, breathing quickly into your neck! You move your lips gently to meet hers, but are unable to reach it, buried as it is in your neck. O God! with the look of an Angel she turns up her exquisite mouth, & as you kiss it, your lips cling, with a lingering at every little separation and you suck ecstasy till your brain is steeped in steam! You press her with an intensity of grasp. She suffers all, trembling, depending, smiling. Does not this speak all a man could wish?’

The ending is delightful: ‘One bounds home like a deer, and rushes to rest that one may dream.’ 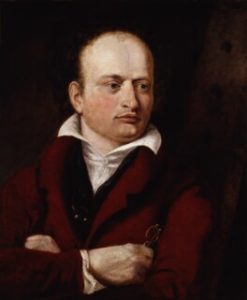 B. R. Haydon by Georgiana Zornlin 1828. I suspect the truculent expression was typical

Haydon, plainly, got a huge kick out of that kiss. And that’s all it was. They were disturbed by a servant and he comments that her reaction was ‘a dreaming sort of distraction at having been kissed by a Man’. Though, of course, that may just be male fantasy. Nevertheless, he obviously felt like a conquering hero.

Haydon’s diaries were private, written for his own pleasure. What I think is so interesting about them is that they offer a rare glimpse into how men really feel.

It is pleasing to report that he had a happy marriage. On December 4th, 1821, he wrote: I am married! Ah, what a crowd of feelings lie buried in that little word. I thank God for at last bringing me to the arms of the only creature that ever made my heart burn really, & I hope he will bless me with health & understanding & means to make her happy & blessed. Dearest, dearest Mary – I cannot write.’

They had eight children together, of whom three survived. Haydon cannot have been the easiest of husbands, and money was a constant worry, but he truly loved his Mary. 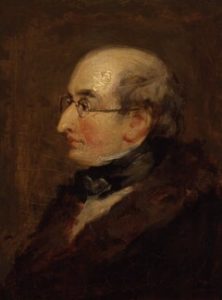 Self-portrait by B. R. Haydon, 1842. He does not look like a man contented with life.

Sadly, his life did not end happily. What he saw as artistic failure (he was unable to sell his large canvasses) coupled with his inability to stay out of debt eventually overwhelmed him. On June 21, 1846, aged 60, he visited a gunsmith’s, bought a pistol, took it home and shot himself the following morning. The pistol was too small to do the job efficiently and the shot, deflected by his skull, missed his brain. When he regained consciousness, he seized one of his razors, and determinedly cut his throat.

The note he left his wife reads as follows: London, Painting-room, June 22,1846.

God bless thee, dearest love. Pardon this last pang, many thou hast suffered from me; God bless thee in dear widowhood. I hope Sir Robert Peel will consider I have earned a pension for thee. A thousand kisses.

Thy husband & love to the last

He left brief notes for his three children, together with his blessing.

‘Stretch me no longer on this tough World.’

The last is a reference to Kent’s words at the end of King Lear, ‘Vex not his ghost: O, let him pass, he hates him, / That would upon the rack of this rough world / Stretch him out longer.

Haydon’s suicide attracted a lot of publicity and a subscription was set up in his name; the great and the good, who had hitherto spurned his financial appeals, raised over £2000, together with an annual Civil List pension of £50, to support his widow.

Selections from Haydon’s diaries have been published and I thoroughly recommend them.

All photographs courtesy of the National Portrait Gallery.

2 thoughts on “Benjamin Haydon on Art, Love and Death”