The British Library’s new small exhibition on Wordsworth’s life and legacy celebrates the 250th year of his birth. Wordsworth came from a well-to-do background; he did well at school, and went to Cambridge – where, to his father’s disapproval and disappointment, he wasted his time. Later, he wrote: ‘I was not for that hour/ Nor for that place’. Formal education and its academic prospects did not interest him. In that respect, he was a man of his time; Shelley, we remember, was expelled from Eton for expressing atheistic views.

For this was an age of Revolution. In 1776, America declared her independence from Britain, and the young William grew up a fervent Republican with radical political views. In 1790, having left Cambridge, he and a friend went on a walking holiday through the Alps, to experience their ‘sublime grandeur’. This, in itself, was part of the new Romanticism. Earlier travellers had not seen the Alps as offering majestic views and sublime grandeur; they had seen the bare, rocky mountains as a barren wilderness, horrible in its desolation.

In 1791, William visited Paris at the height of the French Revolution. At first, he was thrilled to be at the centre of momentous events during one of the great turning points of history, but, gradually, the Revolution’s darker side revealed itself. Initially, Wordsworth wrote about his childhood, and his youthful visit to Revolutionary France in The Prelude, book XI, ‘Bliss was it in that dawn to be alive, / But to be young was very heaven.’ Later, in 1809, he tellingly changed its title to ‘French Revolution, as it Appeared to Enthusiasts.’ 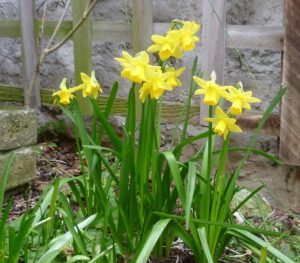 ‘A host of golden daffodils’ from Wordsworth’s poem, The Daffodils, and number 5 in The Nation’s Favourite Poems. Photo by Elizabeth Hawksley

What Wordsworth developed during his early adult years was what he called a ‘sense of place,’ and he felt this most strongly in the natural world. For him, a sense of place was something deeply personal; an emotional response to a particular time and place and experienced most deeply by the person concerned. And, for him, it was, not only the Lake District, its mountains, valleys and lakes, but also, the ordinary people who lived there, like the leech gatherer, and its wild flowers, were worthy subjects of his literary genius.

Not all of Wordsworth’s contemporaries admired these poems on simple subjects. Keats, for example, writing to his friend John Reynolds in 1818, felt that Wordsworth’s ‘admire me I am a violet! – dote upon me I am a primrose!’ poems were too banal for greatness.

This exhibition looks at what, specifically, inspired Wordsworth, and why. He was a great walker and went on walking tours all over Britain, as well as Revolutionary France, the Alps, Italy, Germany and the Netherlands. 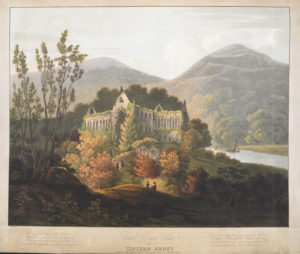 Tintern Abbey, the south-east view, by Frederick Calvert, 1815. Courtesy of the British Library

When Wordsworth first saw Tintern Abbey in Monmouthshire in 1793, he was a troubled young man, and he had much to be troubled about. When France declared war on Britain earlier that year, Wordsworth was forced to leave his pregnant girlfriend, Annette Vallon, in France and return to England.

What he, personally, took from his visit to Tintern Abbey was ‘tranquil restoration’ and the little, nameless, unremembered, acts/ Of kindness and of love.’

He would not see his then unborn daughter until 1803.

What the artist Calvert wants us to see in the painting above is the ‘sublime grandeur’ of the ruined Cistercian abbey in its autumnal setting with the sun lighting up the trees’ bronzed leaves and the two mountain peaks dominating the background, all inspiring awe in the visitor. Behind the abbey is a lake with a small boat, and, in the foreground, two people contemplate the magnificent Gothic arches of the abbey and ponder, perhaps, on Shakespeare’s ‘bare, ruined choirs, where once the sweet birds sang.’

In other words, Calvert is showing the viewer what he, or she, ought to be admiring. Wordsworth’s view, however, is very different from Calvert’s – and that is the point. What Wordsworth is aiming for in his poetry is, above all, the personal. 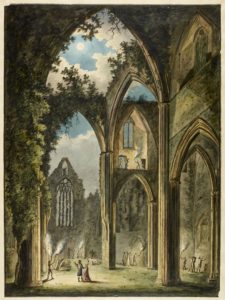 Tintern Abbey – a Gothic moment. Courtesy of the British Library

The second picture of Tintern Abbey shows the contemporary fascination with the Gothic, and is a markedly different view from Calvert’s. One could visit the abbey by torch-light, where the climbing ivy and the full moon accentuated the shadows and the general creepy effect. The visitors look suitably impressed.

As Wordsworth’s fame as a poet grew, he became increasingly associated with the Lake District, where he made his home, and a number of publishers took advantage of the popularity of the Lake District which offered so many examples of the ‘picturesque’.

‘Picturesque’, a new word, had to be explained. And Dr Johnson’s, Dictionary of the English Language, 1755, described it thus: Expressing that peculiar kind of beauty which is agreeable in a picture; striking the mind with great power or pleasure in representing objects of vision, and in painting to the imagination any circumstance or event as clearly as if delineated in a picture.’  You can tell that even the great Dr Johnson struggled to explain this fashionable new concept. 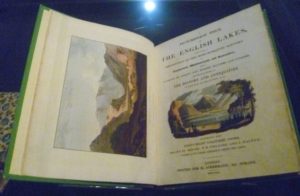 A Picturesque Tour of the English Lakes, by Theodore Fielding and John Walton was published in 1821, with 48 hand-coloured pictures – and it can’t have been cheap. It offers the traveller the area’s ‘History and Antiquities’ and demonstrates that there is much of interest to see; and they quote Wordsworth’s poetry extensively. Prospective visitors either bought the book to see for themselves what the Lake District looked like, or bought Wordsworth’s poetry to read the complete poems for themselves. It all made good business sense.

‘This City now doth, like a garment, wear / The beauty of the morning, silent, bare, / Ships, towers, domes, theatres and temples lie/ Open unto the fields, and to the sky.’ Thomas Mann Baynes’ A View of the Thames from Westminster Bridge, 1799. Courtesy: British Library.

Wordsworth’s sonnet, On Westminster Bridge is one of his most famous poems – it comes in at number 24 in The Nation’s Favourite Poems. If you stand at the middle of the bridge looking east towards the city, there is a plaque on the railing with the poem engraved on it, and I have often heard people stop and read the poem out loud. I’ve done it myself.

It’s one of those poems which has the capacity to slow down time, if read out loud properly. It’s almost impossible to read it quickly:

The very words with their long vowel sounds, the consonants at the beginnings and ends of words, all help to slow it down and force the reader to concentrate on what he or she is saying.

Wordsworth actually composed it on the roof of a coach while crossing Westminster Bridge in 1803; he was on his way to Calais to meet his illegitimate daughter, Caroline, for the first time. Something if the momentousness of that occasion comes across in the poem, even though, ostensibly, it is about something completely different. Nevertheless, we, too, respond to the intensity of the moment.