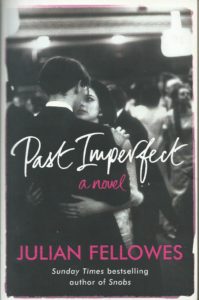 Fellowes’ coda at the end of the book, The Story Behind Past Imperfect’, made an observation about the nature of time which really struck me:

‘I had for a long time been developing a theme for a novel about the whole business of time, how each of us – those who live into their fifties anyway – must negotiate our way through three, or even four completely distinct historical periods before we are allowed to rest. Periods with different philosophies, different truths, different social mores, different clothes. Nor is it just that the world has changed around us, but that we have changed too. We no longer think the thoughts of our youth, nor do we, in many cases, support the same prejudices, commit to the same beliefs.’

How true! I’ve been thinking about this on and off and a small episode came into my head about Christmas at Hall Garth when I was a child which illustrates this nicely. 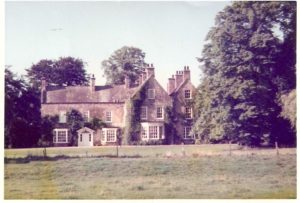 I am eight years old and live at Hall Garth, a large country house in Co. Durham, with my parents and my three brothers (an heir and two spares: ‘You’ve done very well, my dear Joan,’ my grand-mother told my mother, condescendingly), a nanny, a nursery-maid, a cook, a butler, a groom who looks after my father’s hunters, a gardener whose wife does the heavy cleaning, helped by Mrs Speirs from the village, and old Mrs Tulloch, (who came from the Shetlands and tells stories of her childhood there) who comes in weekly to do the mending.

My Aunt Polly and her two sons usually join us for Christmas. Roland and Piers are two-and-a-half and five years older than me and call each other ‘Bros’ which I find incredibly grown up, though, in fact, it’s just prep school slang.

Carr, the butler, does the Christmas decorations in my parents’ part of the house: morning-room, dining-room, drawing-room and the two halls, but ignores the smoking-room, my father’s domain. He arranges artistic sprays of holly along all the large gilt picture frames with tasteful blobs of cotton wool for snow.

The Christmas tree is up in the nursery and smells wonderfully piny. We still use the Victorian metal candle-holders with real candles which you clip onto the branches. When lit, they flicker beautifully. There are fragile Victorian glass baubles, too, which gradually break.

Most exciting of all, Roland organizes games of ‘Battle Royal’. We upend the nursery furniture for barricades, share out the soft toys and hurl them at each other, never mind the bruises. Every now and then, Roland calls a truce to collect the toys in No Man’s Land. Heaven knows how we don’t burn the place down – though there is a bucket of sand by the tree in case of accidents.

On Christmas Eve, we hang up stockings at the end of our beds using my father’s knee-high woolly shooting socks (knitted by Mrs Tulloch).

The turkey for so many people is so huge it has to be cooked in the large 19th century oven built into the four feet thick wall in the Elizabethan part of the house. At eight, I am still eating upstairs with Nanny, the nursery-maid and my brothers in the day nursery, so I don’t get to see the turkey in all its glory nor the flaming Christmas pudding. We get our share of turkey, stuffing and the rest, but our lunch is brought up separately by the nursery maid. I am not considered old enough to eat in the dining-room downstairs, and shan’t be until I’m eleven. 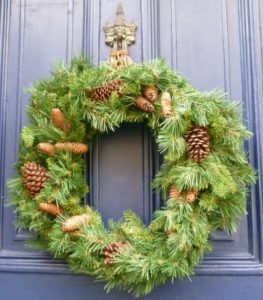 I don’t suppose such a Christmas would have been out of place in the 1870s and, up in Country Durham at least, that way of life survived, more or less, until the mid-1970s. And, going back to Julian Fellowes’ comments about time, the world of my eight-year-old self was so different from the world today in its customs, social assumptions, language and ways of thinking, I can scarcely believe that it really was like that. But it was.

I hope you all have a happy and prosperous 2019

12 thoughts on “Episodes in my Life: Then and Now”