This painting, ‘The Wounded Cavalier’ by William Shakespeare Burton, exhibited at the Royal Academy in 1856, has something about it which has always intrigued me. What’s going on? Why is the young Puritan looking down so disapprovingly. Why is the Cavalier lying wounded in the middle of a wood? 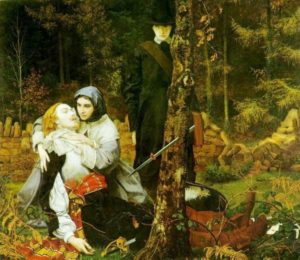 The painting is very much in the Pre-Raphaelite tradition, that is, it is painted meticulously from nature, and, in order to get the wanted clarity of colour, the artist  first covered the canvas with a wet white ground to give the painting a sort of luminosity.

Burton even went so far as to dig a deep pit for himself and his easel so that the wounded cavalier and the young woman tending him are viewed from ground level. We are looking up at them and the stern Puritan standing behind them which, somehow, makes us complicit in the drama which is being played out.

So, what do we have? The fictional scene is set during the English Civil War (1642-1649). If you are familiar with Sellar and Yeatman’s brilliant take on English History, 1066 and All That, you will see at once that the prim, upright – and uptight – young man looking down so disapprovingly is obviously a ‘Right but Repulsive’  Roundhead follower of Oliver Cromwell. The stricken man on the ground is, equally obviously, a ‘Wrong but Wromantic’ Cavalier, a Royalist supporter of King Charles I. 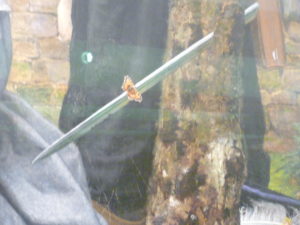 Butterfly on sword. Note the large brown leather cover of the Bible top right – see below

They are in a wood in late autumn; the tree trunk bisecting the canvas is a young oak – we can see the brown curled up oak leaves hanging down at the top right of the tree, and we note that there is a white patch of a fungal infection at the base of the trunk. There are other signs of decay, too, with the withered bracken leaves in the foreground. The red admiral butterfly perched in the sword blade is usually seen from May to October. It should be migrating now. If it can reach southern Europe, it will hibernate over winter. If it stays in the wood, it is unlikely to survive. Here, it symbolizes the ephemeral nature of life and suggests, perhaps, that the Royalist’s fortunes are fading.

What about the Puritan couple? Who are they? The young woman is not wearing a ring which tells us that she is not married to the young man. They could be brother and sister – no respectable woman of the period would walk unchaperoned in a wood with a man to whom she was not either married or related. The young man actually looks very young – I’d put him somewhere between seventeen and twenty – he hasn’t thickened out yet and he is beardless. His disapproving stance could be because he’s not sure how to react, so he just stands there, clutching a large Bible.

If you look closely, you can see that the Bible has a couple of book markers in it (top left on the picture below). It has been suggested that one marks an Old Testament passage, and the other a passage from the New Testament. Perhaps, it symbolizes a choice between an Old Testament Jehovah, all anger and destruction, and the gentler teachings of love and mercy from the gospels of the New Testament. Which path will the young Puritan take? From the look on his face, it won’t be compassion. 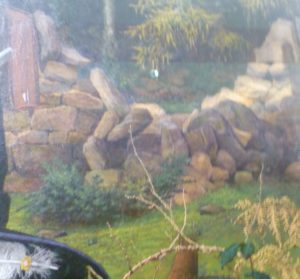 What about the Cavalier. Why is he in the wood in the first place? What happened? The viewer realizes that there is a missing fourth person; somebody has recently fought the Cavalier, wounded him and escaped – possibly on hearing the Puritan couple walking in the woods – and knocking down the wall at the back in his hurry to get away. 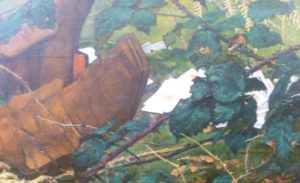 Fallen cards. On the left is the Cavalier’s brown right boot and the red heel of of the left boot is clearly visible

We note the fallen playing cards lying trampled among the brambles at the bottom right of the painting. The explanation at the Guildhall Art Gallery suggests that the Cavalier and another man have been playing cards and one of them has lost heavily. Perhaps the loser has attacked the Cavalier rather than pay up. I confess, I don’t find this very convincing. A wood seems a very odd place to play cards. Another suggestion is that the Cavalier has been ambushed by someone who has stolen some secret dispatches he was carrying.

I can’t say that I see any evidence for secret dispatches but I must confess that the Cavalier being a Royalist spy has more appeal. Let’s have a closer look at him. What can we tell about him from his clothes? He is wearing expensive brown, knee-high riding boots and, furthermore, they reveal that the heel on his left boot is scarlet. Only people who have been received by King Louis XIV at Versailles are entitled to wear scarlet heels. His breeches and his dark-coloured cloak show the edge of the white embroidered collar. He wears a white shirt. 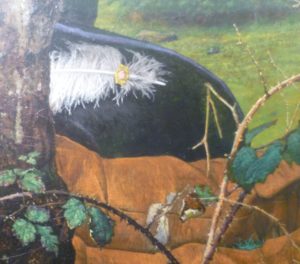 He is also wearing a breast plate so, plainly, he is expecting trouble. His fashionable, black Cavalier hat has fallen off and is lying on the ground just behind his left boot. It sports a white ostrich plume secured by a small gold decorative stud. So he doesn’t lack for money. 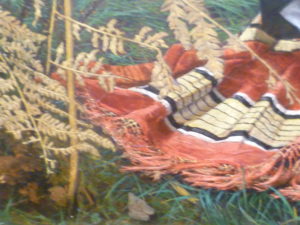 Silk Sash with Tassels lying  against the withered bracken fronds

Around his waist he wears a gorgeous orange silk sash with tassels. He has a small moustache and a rather straggly short beard, and his reddish-gold hair is worn long.  Whoever he is, he is rich, good-looking, and comes from an upper-class background. If he is a spy, he’s certainly not anonymous. And the Puritan maiden? Her modest head scarf, her white double collar and her deep cuffs are well made. The browny-grey dress material looks warm. She and her brother clearly come from a respectable family.

In fact, it’s possible that she knows who the wounded Cavalier is. There were many families during the Civil War where neighbours found themselves on opposite sides. Fathers chose one way and sons another; or brothers chose opposite sides. More than one Royalist landowner who had to flee the country came to a special arrangement with a Cromwellian neighbour to ‘buy’ their estate and save it from being sequestered by the Roundheads.

The young woman is cradling the wounded man in her arms, trying to staunch the wound in his shoulder. Is he dying, or is he, as the title tells us, just wounded? He is deathly pale but, if you look closely you can see that his right eye is open a fraction. He can see her and they are close enough for him to say something which her brother cannot hear.

Burton painted another version of this picture in 1871 which is now in Tate Britain but it’s not on display. Here the young man’s colour is less pale and his eyes are half-open. He is conscious. He is wearing a dark blue cloak with a white, possibly velvet lining and a white embroidered collar. It’s an intimate picture and, again, I can’t help wondering if they know each other. 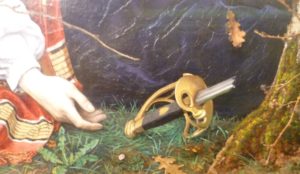 Hand and hilt. The sword hilt resembles a skull with a blade through the eye-socket

I’ve saved the real puzzle for last. I can’t understand how a sword blade could slice through the oak tree from the right side – opposite the fallen Cavalier, and somehow leave the broken hilt of the sword lying on the ground on the left side of the oak, next to the fallen Cavalier’s right hand. And, surely, the blade’s point is far too low to pierce the Cavalier’s shoulder.

The picture’s narrative is unsatisfactory in some ways but, all the same, I always find myself drawn to it to see if I can puzzle out anything new. I’m sure there’s a story there somewhere.

Entrance to the Guildhall Art Gallery in the City of London is free. Their collection of Victorian paintings is excellent.

12 thoughts on “Every Picture Tells a Story: The Wounded Cavalier by W. S. Burton”