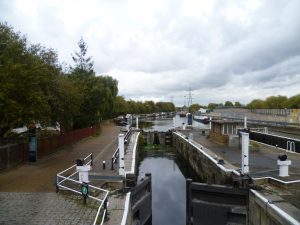 One of the mills, later known as the Coppermill, (see below) was taken over in 1647 by John Samyne, a staunch Royalist, who produced gunpowder there in the 1st Civil War (1642-1651). Later, it metamorphosed into a paper mill, then a leather mill, and then a mill for crushing linseed for oil. 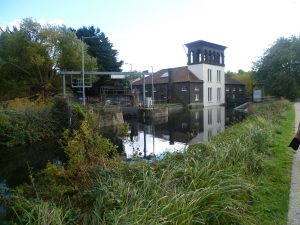 In 1808, it was bought by the British Copper Company who expanded it hugely. The Industrial Revolution was gathering pace, and copper was a valuable material with a multiplicity of uses. The Company smelted copper in south Wales and sent the ingots to the mill via the navigable River Thames and along the River Lea Navigation. Here it was rolled into sheets and used to cover ships’ hulls among other things. 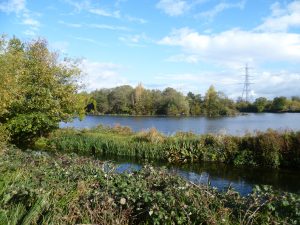 In 1859, the Coppermill changed hands and was bought by the East London Waterworks. London expanded hugely in the 19th century and there was an urgent need for clean drinking water. The Victorians, with their usual energy, set about doing something about it and the marshy Lea valley looked a promising area. 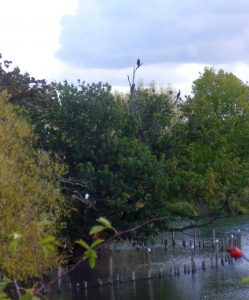 Close up of island with the heronry. The white dots on the ring of posts are herons. A cormorant is standing guard on a bare branch on top of a tree. The red splodge to the right is a rose hip.

Between 1852 and 1895, navvies hand-dug nine reservoirs here – a vast undertaking. The final reservoir, the huge 13 hectares Lockwood reservoir, was constructed in 1897, this time using steam-powered pumps, engines and cranes and fifty horses. The difference in manpower needed is staggering; the historian Terry Coleman calculated that a couple of steam excavators tended by twenty men could complete work which twenty years earlier would have taken 200 navvies. 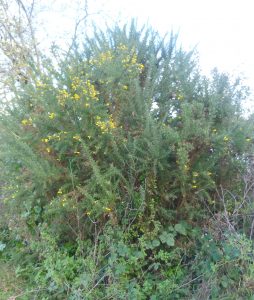 Gorse bush. Country lore says: ‘Kissing is out of fashion when the gorse is out of blossom.’ Fortunately, gorse is always in bloom.

In 1860, the East London Waterworks turned the Coppermill into a pumping station to pump water into the newly-constructed reservoirs and installed a Cornish steam engine called Victoria to do the job. Over the next forty years, a vast network of underground reservoirs, pipes, chambers were created under what became the Engine House to link all the new reservoirs together and to treat and pump drinking water to its customers. Today, it is the main source of water for 3.5 million people. 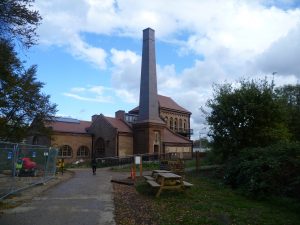 Fast forward a hundred years or so. The 211 hectares Thames Water reservoirs are fully operational, and now use modern technology. The Coppermill and the Engine House were still in use until the 1980s, but what to do with them once they had been decommissioned? After a  lot of thought, money and hard work, the whole site has been transformed into an important wetlands centre, home for migrating birds. The Coppermill and the Engine House have been granted Grade II listed buildings status for their architectural features and their importance in local history. It’s a very 21st century solution to the problem of what to do with redundant industrial buildings and one where everyone wins, including the wildlife – and the visitors. 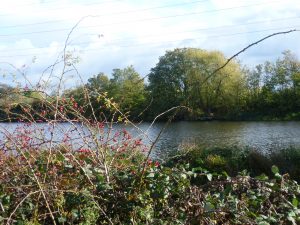 One of the things I like about the Walthamstow Wetlands centre is the clever way the Engine House has been adapted to its new purpose. Externally, the typical Italianate-style architecture – so beloved by Victorian builders of industrial buildings – remains much the same. The dramatic tall chimney makes a bold statement and the buildings have arched windows and steep-pitched roofs, more suited to a church. But I’m not knocking that. I have huge respect for what Victorian moral earnestness accomplished industrially. 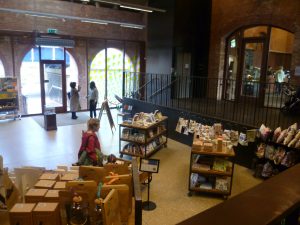 Inside the Engine Room: the central lobby area. The cafe is on the right

The Engine room has been gutted and, inside, there is now a central lobby area with an information desk, a small but useful shop, and a reception area. A few stairs leads to a pleasant café which has an outdoor decked area. There is also, a multi-functional education space, and a ‘Water and Life’ exhibition. 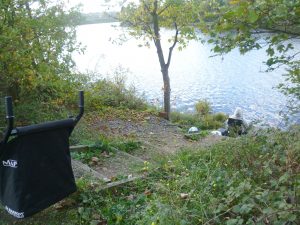 The fisherman has blocked the path going down to the water with his trolley to ensure that he’s not interrupted. A bit selfish? Perhaps he just needs to be alone.

The reservoirs are all bordered by hawthorn, wild roses, gorse and various natural river bank plants like bulrushes, scabious, thistles and so on between the water and the public footpaths. The walker can see the water beyond, and there are places set aside for fishermen where you can get to the water’s edge but the priority is plainly to provide nesting places and cover for the wild life. 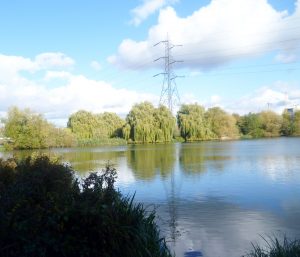 Most of the reservoirs have tree-covered islands in the middle, one of which has been home to a heronry for many years. The Wetlands is not pretending that it’s in the country; there are places where you can clearly see a pylon or two, for example, or a block of flats in the distance.

View from the top of the Coppermill

The old Coppermill has been turned into a viewing platform and, to the right of the building, you can see the old wharf loading crane from when the Coppermill was a 19th century copper-rolling mill. The medieval-looking windows at the top remind me of the story of Rapunzel; the views are beautiful but restricted. (And Rapunzel would need extremely long hair.) 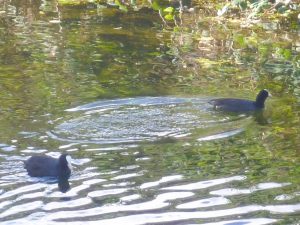 Coots just popped up from diving

It was a chilly day in late October, and there weren’t many birds about. We saw some herons, a few gulls, a couple of cormorants, a couple of coots, and a pair of great-crested grebes. I suspect there will be more winter migrants in a month or so, and a lot more activity in the spring.

All the same, we were delighted to discover the Walthamstow Wetlands. It’s easy to get to, the coffee is good, there’s plenty to see, and it’s free. www.walthamstowwetlands.com

6 thoughts on “From Industrial Archaeology to Cormorants”