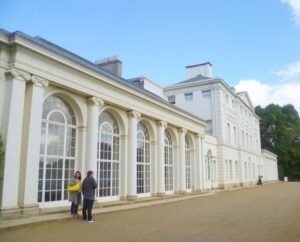 Step forward Rosa Forbes, twenty-three, thin, badly-dressed and a bit prim, but with hidden possibilities, given the chance. Rosa’s widowed father thinks of nothing but hunting (in winter) and gambling (the rest of the year), he scarcely notices Rosa. When he dies, the estate is sold to pay off his debts and Rosa, in desperation, writes to her unknown great-aunt for help. Two weeks later, Rosa finds herself at the magnificent Manderville Court (a.k.a. Kenwood House) with only one small shabby valise to her name. 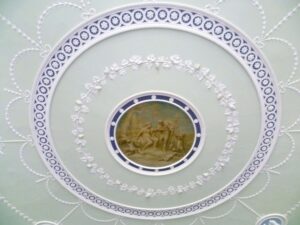 Rosa is entranced by the roundel in the hall and early the following morning she sneaks down and lies on the floor to admire it. To her embarrassment, Lord Ludovic comes in unexpectedly and nearly trips over her.

Statue of the god Mercury in the entrance hall

She is horrified by the statue of the Greek god Mercury standing in a nonchalant way in an alcove – he has nothing on except for a fig leaf – and, ludicrously, a hat. She doesn’t know where to look. Lord Ludovic. is amused by her confusion. He tells her that Mercury is the messenger god; what message does he have for Rosa? 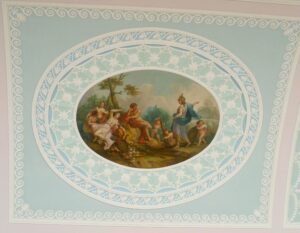 Ceiling painting by Antonio Zucchi, with the story of Hercules resisting temptation and pointing to the temple of Glory in the background.

When she discovers it, Rosa loves the library. She forgets to be shocked by the ceiling panel of Hercules choosing between Glory and the Passions. All she can do is breathe, ‘Oh!’ Those colours! The pale blue and pink set off the dark red and gold of the books so well. 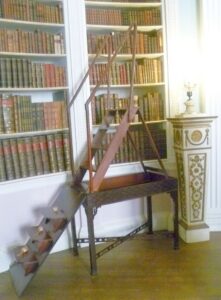 Nobody’s there, so, greatly daring, she climbs the library steps and finds The History of Tom Jones by Henry Fielding. Isn’t that supposed to be very shocking? Gingerly, she takes Volume I off the shelf and tucks it under her arm. A day or so later, she is back at the top of the ladder. Tom Jones is terrific and she can’t wait to read Volume II. The ladder is standing in shadow when she hears laughter and footsteps. Lord Ludovic comes in with a newly-arrived house guest, the supercilious Sir Godfrey, he of the braying laugh. When he met her the previous evening, she overheard his unpleasant comment to Lord Ludovic on her dowdiness. 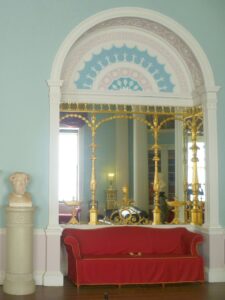 The library. Mirror and bust of Homer on the left.

What should she do? They hadn’t noticed her so far but when they turned round…

She glances across at the gold framed looking-glass in the alcove with the bust of Homer beside it, and, to her horror, sees Lord Ludovic looking straight at her. As their eyes meet, he winks. 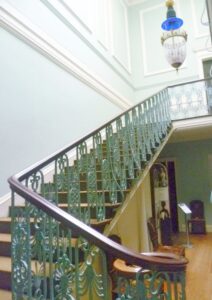 Rosa feels her colour rising. She tip-toes down the steps as stealthily as she can and flees back to her room, stumbling on the treads of the elegant cantilevered staircase. She finds her great-aunt’s lady’s maid in her bedroom with a couple of lengths of silk over her arm. ‘My Lady suggests that these would make you a couple of evening gowns,’ she says, spreading them over the bed. 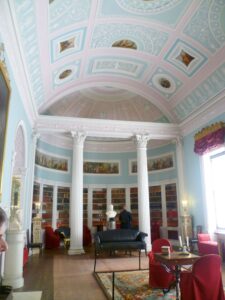 The lady’s maid smiles, ‘And I am good at it! It would be no trouble.’ 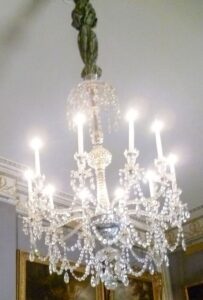 Then there’s the Drawing-room, where the ladies sit after dinner and wait for the gentlemen to finish their port and salacious stories before joining them. She loves the chandelier in the Music Room where the cut crystals sparkle in the candlelight and flashes fire whenever a draught moves the air. 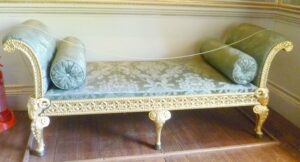 The chaise longue is obviously top of the range but it’s not comfortable. Rosa keeps feeling she’ll either slide off, or spill her coffee. Worse, the turquoise damask clashes with her new hyacinth blue silk evening gown. She overhears Sir Godfrey whispering behind Lady Pomeroy’s fan and they are both looking in her direction. 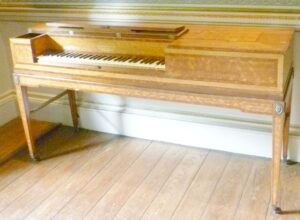 Then she notices the pianoforte. Rosa loves music and, when her mother was alive, she had lessons every week. After her mother’s death, when Rosa was fifteen, that stopped and her father refused to have the piano retuned, so she could no longer even practice. 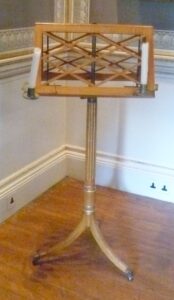 The Drawing-room is another room Rosa sneaks into when she hopes no-one will notice. There some music inside the piano stool and it’s not too difficult. She finds a couple of country songs she knows, takes a deep breath, sits down, runs her fingers lightly over the keys and begins to sing.

And that’s just Chapter I.

You can have a lot of fun with a beautiful house and a bit of imagination.

11 thoughts on “Inspired by Kenwood House: Take a Heroine”