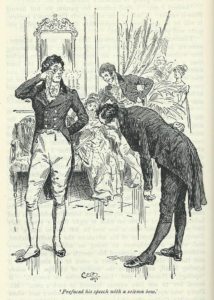 Perhaps the answer is that Charlotte is more down to earth than Jane, who never ever thinks ill of anyone, and maybe ‘Eliza’ sometimes wants to let rip or to hear a home truth she’d never hear from Jane. Then, Mrs Bennet is hardly a mother Elizabeth can look to for advice, so perhaps the older Charlotte fulfils something of that role, too.

So let’s look at Charlotte herself. She obviously loves Elizabeth sincerely. When they meet after the Meryton assembly, she teases Elizabeth about Mr Darcy describing her as only just ‘tolerable’ and refusing to dance with her but she also says later, ‘I wish he had danced with Eliza.’ She feels for her friend.

While the Bennet girls are known beauties in Meryton, all the Lucas girls are, as Mrs Bennet puts it, ‘very plain.’ Elizabeth’s sitting out a dance or two at the Meryton Assembly because of the scarcity of men, obviously happens very rarely, and she can joke about it. One suspects that the plain Charlotte, although intelligent and sensible, has often found herself a wallflower; and, at twenty-seven, she is perilously near being thirty and an old maid. 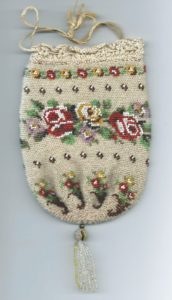 Charlotte’s future as a single woman will be grim, as she must know very well. Her father, Sir William Lucas, is ‘new money’ and not too much of that, either. He was in trade until he was knighted after making a well thought of speech to the King who visited Meryton during his mayoralty. Buoyed up by the honour, Sir William decided to quit trade, build himself a new house outside Meryton and live as a gentleman. He has a ‘tolerable fortune’ but we gradually realize that, whilst it might enable him to lead a life of leisure, his daughters are almost dowerless and money is a bit tight. Charlotte’s marriage to Mr Collins enables her next sister (probably Maria) to ‘come out’, something the family couldn’t afford while Charlotte remained unmarried.

Any unmarried Lucas daughters will have to rely on the generosity of their brothers, or their father, if he’s still alive, to support them. Charlotte has learnt that,  if she is to find herself a husband, she cannot afford to be anything other than pragmatic. She is plain and she has no money to offset that disadvantage; she must look after herself. When Elizabeth is annoyed by Mr Darcy asking her to dance at the Netherfield ball, (she is half in love with Mr Wickham) Charlotte tells her ‘not to be such a simpleton, and allow her fancy for Wickham to make her appear unpleasant in the eyes of a man of ten times his consequence.’

So what does Charlotte want in a husband? Jane Austen tells us: ‘Without thinking highly either of men or of matrimony, marriage had always been her object; it was the only honourable provision for well-educated women of small fortune and, however uncertain of happiness, must be their pleasantest preservative from want.’ But will she ever get the opportunity? 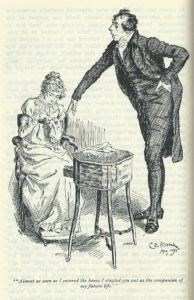 When Charlotte visits Longbourn shortly after Mr Collins has proposed to Elizabeth and been rejected, Lydia grabs her and cries in a half-whisper: ‘I am glad you are come, for there is such fun here!… Mr Collins has made an offer to Lizzy, and she will not have him.’

Charlotte stays to hear all Mrs Bennet’s complaints and, when Mr Collins enters, Mrs Bennet shoos everyone away, saying that she wants a little private conversation with him. Nosy Lydia stays – and so does Charlotte who stands, unobserved, by the window. She hears Mr Collins withdraw his pretensions to Elizabeth’s hand in marriage. It is clear that he now considers himself free to look elsewhere.

This is Charlotte’s chance – and she doesn’t hesitate. When, later, Mr Collins ignores his cousins and talks almost exclusively to Charlotte, she makes sure that she listens sympathetically and Elizabeth, in particular, is grateful to her. It is a nice ironic touch, considering what Charlotte’s objective is.

The following day, the Bennets are due to dine with the Lucases, and, again, Charlotte listens tirelessly to Mr Collins. Elizabeth thanks her and Charlotte slyly says that the knowledge that she has been useful to Elizabeth amply repays her for the little sacrifice of her time. 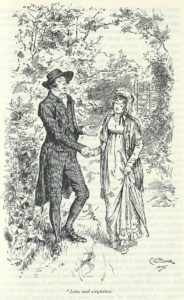 But has Charlotte been encouraging enough? Mr Collins is to leave the next day. Fortunately for her, Mr Collins is as anxious to secure a wife as she is to hook him, (his patroness, Lady Catherine de Bourgh has told him to find a respectable wife). The following morning, he sneaks out early and hastens to Lucas Lodge. Charlotte spots him from an upper window and ‘instantly set out to meet him accidentally in the lane.’  (I love that line – it always makes me laugh.) He duly proposes and is accepted.

From a material point of view, Charlotte has actually done well for herself. The living of Hunsford, which Lady Catherine has bestowed on Mr Collins, is a good one – possibly worth £500-600 p.a. As rector, Mr Collins is entitled to a mandatory tithe of 10% of all the farm produce within the parish, as well as the revenue from the glebe, the farmland which goes with the parsonage itself. (Vicars were entitled only to ‘small tithes’, worth far less.) We know that Hunsford has at least two meadows and that the Collinses keep cows and poultry.

Keeping poultry was the traditional preserve of the farmer’s wife and the selling of eggs and surplus hens provided her with a personal income; Charlotte now has the means of earning her own money. 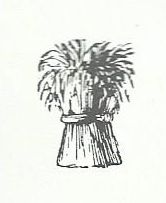 We know that Mr Collins’s father was ‘illiterate and miserly’ (‘illiterate’, according to Dr Johnson’s Dictionary, means ‘ill-educated’ not just ‘unable to read and write’.) Illiterate or not, he was rich enough to send his son to university, even if he kept him very short of money. Once his father died, Mr Collins would have inherited enough capital to give him an income, even if only a few hundred a year.

And, as we know, when Mr Bennet dies, Mr Collins is due to inherit Longbourn and the £2000 p.a. which comes with it. Providing Charlotte produces a son, she will be set up for life. In fact, she and Mr Collins will be richer than Sir William Lucas, Charlotte’s father.

What about Hunsford Parsonage itself? We know that Lady Catherine had a lot of work done to it before Mr Collins arrived but that it was rather small. It doesn’t sound that small to me. There is Charlotte’s sitting room which faces the back; Mr Collins’ book room and the dining parlour which both face the front, and there is also a drawing-room. There would also have been a kitchen, a scullery, probably a walk-in larder, and a wash house, not to mention a probable boot room, a lamp room (both more like walk-in cupboards), and other ‘necessary’ rooms. 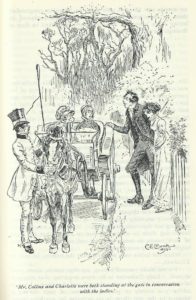 We are told that Elizabeth has her own bedroom at Hunsford and presumably Maria and Sir William do as well. Back at Longbourn, Mrs Bennet has her own bedroom and I cannot help thinking that Charlotte would have insisted on her own room, rather than sharing a bedroom with her husband. That’s at least five bedrooms. There would also be attic rooms for the servants.

And, getting more personal, Charlotte and Mr Collins married in November, but we do not hear of the Collins’s prospective ‘young olive branch’ until at least the end of the following September. Charlotte has obviously also been successful in seeing that any marital activity is curtailed as much as possible – no sex during Lent was not be unusual.

What about servants? Mr Collins has a gig, which means he has a horse and stable, and probably young John looks after both and maybe gives a hand in the garden when needed. There would be a female cook and a couple of housemaids, one for the kitchen and the other to clean the house. A washing woman probably comes in once a fortnight to deal with the laundry. 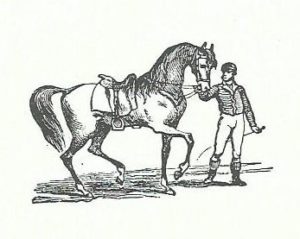 We know that the Collinses do not live in a style that enables them to visit many of the nearby gentry’s houses. Apart from Rosings, their social circle is fairly restricted but Charlotte will surely be busy becoming acquainted with her husband’s parishioners and setting up her little poultry concern. But, once the ‘young olive branch’ appears, things may change. Lady Catherine may be persuaded of the necessity to add a nursery wing and there’s nothing like small children for increasing one’s social circle.

I have gradually learnt to admire Charlotte, perhaps more than Jane Austen herself would agree with. When Mr Collins tells Elizabeth, shortly before she leaves Hunsford, ‘My dear Charlotte and I have but one mind and one way of thinking. There is in everything a most remarkable resemblance of character and ideas between us. We seem to have been designed for each other,’ I realized that Charlotte has also been kind, as well as clever, in how she deals with her husband.

Mt Collins had a miserable childhood, by all accounts, and developed an irritating mixture of humility, coupled with self-conceit as to his own worth, probably to cover up deeply-hidden feelings of inadequacy. The result is that most people don’t want anything to do with him – with the exception of Lady Catherine de Bourgh who finds his obsequiousness towards herself perfectly natural.

However, Sir William, Charlotte’s father, plainly likes his son-in-law, (he is also over-awed by Rosings and Lady Catherine) and he is grateful to Mr Collins for giving Charlotte such a good home. We note that Mr Collins takes him out in his gig every day to see the countryside. OK, he probably talks at his father-in-law rather than to him, but, all the same Sir William appreciates Mr Collins and such approbation must be music to his son-in-law’s ears after his horribly mean father.

Charlotte herself is well aware of Mr Collins’ failings but she allows him to think that she agrees with him whilst, at the same time, manoeuvring herself into being in charge of her own life. She ensures that he won’t interrupt her in her small back room, she encourages him to be out in the garden for his health’s sake, and she’s learnt not to hear his more embarrassing or stupid pronouncements. I think she’s kind to him – a virtue I value highly. It’s not showy but it can make a lot of difference to the recipient’s life. And Mr Collins’ life, so far, has been very short of kindness.

Charlotte never says anything to Elizabeth about her marriage, but she must be aware that her life has opened out considerably: she now has the status of a married woman, she will shortly be a mother, and she has some money of her own. For a plain, poor woman in Regency England, that’s not nothing.