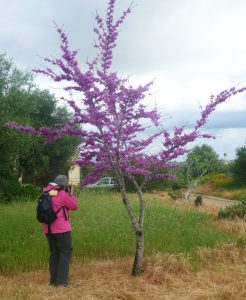 Take the Judas tree. According to St Matthew, Judas repented of betraying Jesus for thirty pieces of silver almost immediately, and returned to the temple to give back the bribe. He said, ‘I have sinned. I have brought an innocent man to his death.’  Their unfeeling reply was, ‘What is that to us?’ Judas flung the money down and left. According to legend, he then hanged himself from a Judas tree. It’s a very human story of a man giving in to temptation and then bitterly regretting it.

I’d never seen a Judas tree before and I was astonished by its vivid colour. Although this tree is not fully grown, it doesn’t look as if it will be a big tree; Judas must have been a light man. And that, somehow, gives the story an extra tragic dimension. 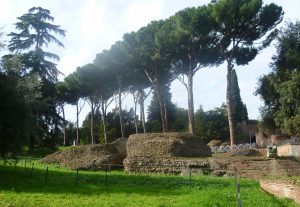 A row of umbrella pines in Rome

My first sight of an umbrella pine was shortly after arriving at Naples airport; I’d come to visit Pompeii and I remembered Pliny’s famous eye-witness account of the eruption of Vesuvius. The explosion, he wrote, ‘can best be described as being like an umbrella pine, for it rose to a great height on a sort of trunk and then split off into branches.’ I recognized the umbrella pine instantly and was quietly thrilled. 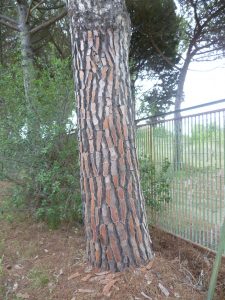 A couple of years later, I was visiting the Etruscan cemetery at Cerveteri and saw an umbrella pine close to for the first time. It has a very distinctive bark which reminded me of a giraffe’s neck. 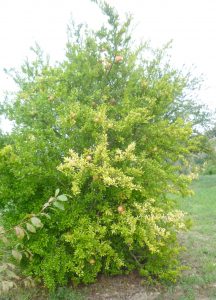 It was on the Etruscan trip that I saw my first pomegranate tree. I’d had a vague idea that they grew like tomatoes so I was surprised to find it was a small, bushy tree. The pomegranate features in Greek mythology. Persephone, daughter of the corn goddess Demeter, was carried off by Hades, god of the underworld, to become his queen. In her grief, Demeter vowed that the earth would be stuck in eternal winter until her daughter returned. Eventually a deal was struck. Because she had eaten six pomegranate seeds whilst in the underworld, Persephone could not return entirely. But she could return for six months a year; the spring and summer months, and for autumn and winter she would go back to the underworld.

Such a dramatic story, I thought, for such an unassuming tree. 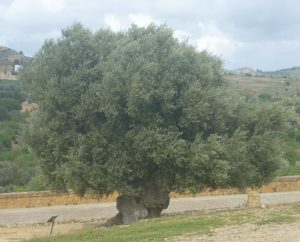 I had seen olive trees before and they are venerable trees. I have included this one from Sicily because it is a thousand years old; there is a notice saying so at the bottom left. It’s amazing to think that it was still a young tree, probably not yet fully grown, at the time of the Norman Conquest in 1066. 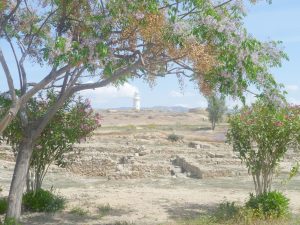 I first came across Persian lilacs in the squares of Cairo and I loved their beautiful purple flowers. I finally discovered what they were when I saw them in Cyprus: syringe x persica. The Persian lilac in the photo forms an elegant arch (with an oleander on either side) and looks through the ruins of Nea Paphos, the first capital of Cyprus, which was built on a headland. There is a lighthouse in the distance.

What is fascinating about the Persian lilac is that it has both seeds (the brown bits in the photo) and blossom at the same time. Historically, it features in Persian and Indian gardens, and the botanist, John Tradescant, brought it to England in the 17th century. Today, you can see them planted around the Royal Pavilion in Brighton. I don’t know if Persian lilacs were part of the original planting but they are suitably oriental trees to go with the architect John Nash’s fantasy pavilion with its domes and minarets. 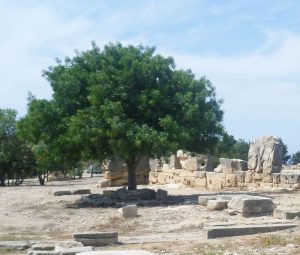 The terebinth, pistacia terebinthus, has Biblical associations. The prophet Hosea mentions ‘The terebinth’s pleasant shade’, and it’s an accurate description. This terebinth is in the sanctuary of Aphrodite’s temple, at Kouklia, in Cyprus – the birthplace of the goddess of love. It was once the source of turpentine, and terebinth galls were used in tanning.

Actually, I just like its name, which somehow hints at mystery. 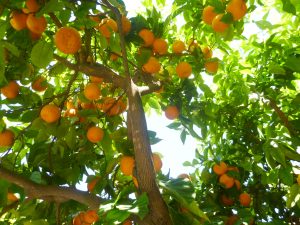 Oranges in the Generalife gardens at the Alhambra, Granada

The Generalife gardens at the Alhambra in Granada, Spain, are simply wonderful, and I just loved the profusion of oranges with their vivid fruits and glossy green leaves. It was the sheer bounty of the fruit which attracted me and I thought it would make a suitable finale for this post.