Sixty-five of the masterpieces which usually hang in one of the State Rooms in Buckingham Palace are now being exhibited at the Queen’s Gallery’s new exhibition ‘Masterpieces from Buckingham Palace’ until January 2022. They are here because of a major services overhaul in the palace itself – a mammoth task involving the removal of lead pipes, dodgy electrical wiring and old boilers. The Queen’s Gallery visitors get the benefit because all the paintings hang at eye level which means that even the smallest paintings can be seen properly. 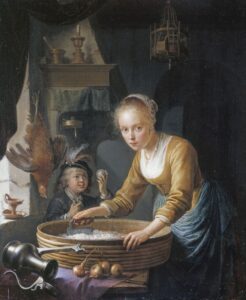 So, today, I’m taking the opportunity to have a close look at a few of my favourites. I particularly like Dutch genre paintings, paintings of ordinary life featuring ordinary people. Some of these paintings are tiny but here you can see every brushstroke. My favourite is Gerrit Dou’s A Girl Chopping Onions (1646) which is only 20.8 x 16.9 cm. A young girl is chopping onions in a round wooden container. There are four more unpeeled onions and a pewter-lidded vessel lying on its side on the table. Standing beside the girl, a small boy holds up a peeled onion – do his eyes look a bit watery – it wouldn’t be surprising with so many chopped onions around! He is wearing a flat velvet hat decorated with what looks like gold braid it and a couple of feathers, one gold and the other white. Who is he?

Everything is meticulously drawn: Dou and his followers were famous for their fine detail – you can see every feather of a dead pheasant hanging up by the fireplace. But what is interesting, and unusual, is the girl’s wary but also direct look. The curator told me that it was her favourite painting, adding, ‘Women were not supposed to look like that – directly at the viewer – at that date.’ She is not a completely downtrodden servant – she wears a simple amber necklace with a crucifix, but she’s vulnerable – as, most young women probably were in the mid-17th century. I found myself noting that the knife lying next to the four onions was within easy reach.

I then found myself thinking: who is she looking at? Could the annoying small boy with the hat be employed by (as a page perhaps) her visitor? 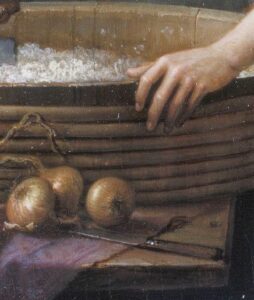 A Girl Chopping Onions by Gerrit Dou, detail. Will she need the knife?

The more I looked, the more I could feel the tension in the air. As a woman, I felt a twinge of sympathy for the girl. But if I were a male viewer – what would he feel? Would he enjoy her confusion? Would he take a step closer to her? It was the Prince Regent who bought the painting. I wonder what he thought.

I’d never heard of Gerrit Dou before but I realized, almost immediately, that I was a fan.

Nearby was another Gerrit Dou: The Grocer’s Shop. The catalogue comments that, ‘it is uncertain whether any meaning is intended beyond the simple recording of everyday activities.’ After studying it for some moments, I realized that I didn’t agree. The arch is interesting – are we, the viewers, outside the grocer’s shop or in another room? Poppy seeds and, perhaps, garlic hang from hooks at the top of the arch. Surely they wouldn’t be hung outside?

I doubt whether this painting is just ‘the simple recording of everyday activities’ there is, I suspect, another agenda. The woman in charge, the one wearing the red bodice, definitely dominates the space; she is the one with the power. Whatever item she is picking up to put on the scales, that’s the one she intends the smaller, more hesitant women to buy. She, the woman in charge, is holding the heavy-looking scales between herself and her customer who is pointing – not too confidently – towards the item she wants. I found myself thinking that I wouldn’t be surprised if the scales weren’t weighted in some way. If ever the red-bodiced woman ever needed a weapon, those scales could do some damage. 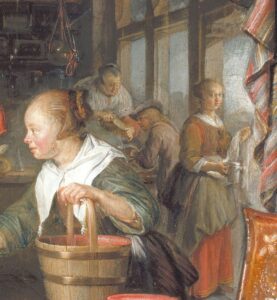 In the background, a woman stands in the doorway watching them both. I couldn’t help thinking that she’d seen this before. The woman in charge is plainly doing well. The salmon-pink cushion with its gold embroidery stood up against the arch is not cheap. The striped curtain likewise. But the alert viewer notes that the bird cage which hangs near the stripy curtain is empty. In the carving underneath the window sill, a number of putti – one of which holds a miniature bow – are tormenting a goat. The pink in the terracotta pot standing on a stool outside is thin and straggly – it looks as though it needs a drink. Something is not right.

What I love about Gerrit Dow’s paintings, I realized, is that the more you looked, the more they revealed of themselves. Whatever else you might say about the profligate Prince Regent – who bought this painting, too – he had an excellent eye for art. 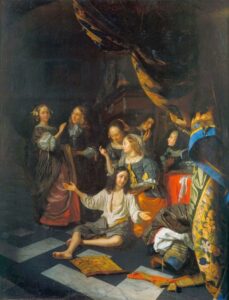 ‘The Game of “Lady Come into the Garden”’ by Godfried Schaleken painted c. 1668

The Game of ‘Lady Come into the Garden’ by Godfried Schalcken is another painting acquired by George IV when Prince of Wales. This painting is full of gesturing hands. Three young men and four young ladies are playing the game of  ‘Lady come into the Garden’. We have no idea what the rules are, all we know is that it was popular amongst the young people of Dordrecht at the time and that all the figures are portraits – we know that the girl sitting behind the smiling, half-undressed young man, who is the artist himself, is his sister, Maria, for example.

The catalogue’s guess is that the participants have to shed a garment every time they fail some humorous task. Maybe the use of hands is a sort of sign language and part of the game. We notice that the third man, standing at the back, has raised his fingers to his lips when talking – or not talking – to the girl he’s looking at. But whatever the game’s rules are, they are about innocent high jinks rather than anything more threatening. None of the young ladies taking part will lose her reputation by joining in. 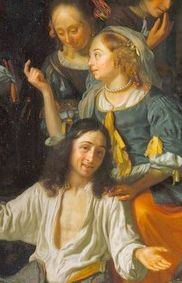 The Game of ‘Lady Come into the Garden’ detail

Maria beckons with her finger to a young lady in the doorway who is holding up her hand as if to say, ‘No, no! I’m not playing,’ but we note that, even while she leans backwards, her feet are carrying her forward.

I have a book called Victorian Party Games which includes ‘Kissing Games’ like Postman’s Knock – which entails a ‘forfeit’ (a kiss) which I remember from my childhood. A similar French ‘kissing game; called la boîte d’amourette also includes kisses as forfeits. Even if there are no kissing forfeits in this game, one can see that shedding garments would lower inhibitions and raise the emotional temperature more than somewhat. 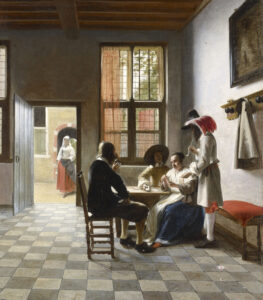 Card-players in a Sunlit Room by Pieter de Hooch, 1658

What I love about Pieter de Hooch (1629-1684) is how he paints space and light. I don’t know how he does it but his paintings allow the viewer to relax – this is exactly how this space was and how it was lit. And … it seems to be adding, this is the story here – as it happened.

We are in a pub, the catalogue tells us; four ‘overdressed wastrels’ are wasting the day away with drink and cards. Through the open door we can see a barmaid with a jug and a set of pipes coming towards them – she has the air of being fed up. 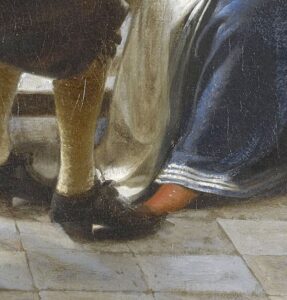 Pieter de Hooch, Card-players in a Sunlit Room – detail of the feet

But there are undercurrents: the main figure, the man with his back to us, knees apart, looks as if his mind is miles away. However, when I enlarged his feet I noticed, not altogether to my surprise that, his right shoe was in contact with the lady’s left shoe. Was that why de Hooch gave her red shoes – so that the viewer would notice – even if the other two men in the picture don’t? 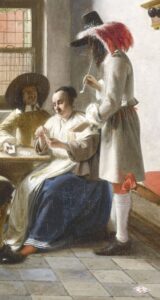 Pieter de Hooch, Card-players in a Sunlit Room – who is in cahoots with whom?

I then looked more closely and the two other men on either side of the woman. The man standing, he of the hat with its enormous feather – is looking down at a card which the seated lady is showing him privately, or so she thinks. But he is also exchanging glances with the other seated man and something is being communicated. We suspect that the two men intend to cheat the lady. The six of hearts lies on the table, face up and everyone can see it. But what nobody has appeared to notice is that the five of hearts has fallen onto the floor.

I may, of course, be quite wrong in my interpretations of what is going on in the paintings I have chosen to look at, but this is how I reacted. And I think that top quality artists paint human truths which are universal in their appeal even if the circumstances of everyday life differ over the centuries.

I loved this exhibition and I cannot recommend it too highly.

4 thoughts on “Queen’s Gallery: Four Masterpieces and their Stories”