A Child’s Day through the Ages by Dorothy Margaret Stuart was one of my favourite books as a child. I particularly liked the story A Garland Over the Door, set in Athens in 438 BC, about the arrival of a baby brother to ten-year-old Ageladas and his little sister, Doricha – and it inspired me to try out something dangerous …. 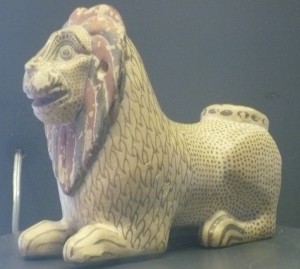 It is a time of rejoicing. The children’s father hangs a garland of olive above the front door to tell everyone that a son has been born. But, as Ageladas’ tutor adds, ‘There is little joy when a girl is born and they hang up a fillet of wool so that their friends may know that there will be no great merry-making.’

I really felt for poor Doricha; I thought she had a rotten time, ‘Already she had been taught that girls must always give way to boys, as women did to men; already she had been made to understand that her part in life would not be to have fun and do interesting things, but to learn to weave and bake and spin, so that someday she might be a good housewife like her mother.’ 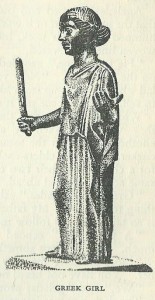 Greek girl: illustration for ‘A Garland Over the Door’

However, there was one thing Doricha did which sounded really exciting. And that was play on a see-saw – Ancient Greek style: ‘Greek children did not sit on either end of the see-saw; they stood up-right, on their toes, keeping perfect balance and timing their jumps to the second.’ I was not a very well-coordinated child, but, instantly, in my imagination, I could picture myself, balancing with ease and grace on that see-saw. 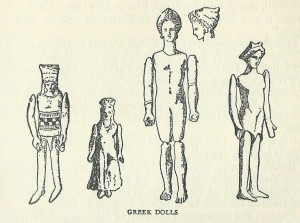 Greek dolls: illustration from ‘A Garland Over the Door’

There was a see-saw at my Primary school on the edge of the play-ground next to a rockery, and I decided that I, too, would see-saw the Ancient Greek way. I stepped onto one end. A friend sat down heavily on the other end. Unfortunately, I didn’t have Doricha’s perfect sense of balance or timing. I shot into the air and landed on my head in the rockery. The next thing I knew, I was in hospital having my head stitched.

‘What on earth were you doing standing up?’ asked my mother crossly. 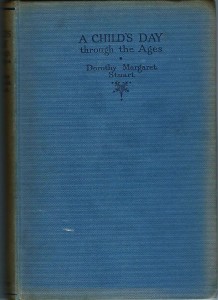 A CHILD’S DAY – through the Ages by Dorothy Margaret Stuart

How could I possibly explain? I spent much of my childhood living as somebody else in my head, in other times and other places. I’d been there, with Doricha, enjoying her feeling of freedom as she timed her jumps perfectly. I still bear the scar – but perhaps it’s a small price to pay for the gift of imagination.