To set the scene: 206 years ago today, on 28th February, 1815, the ex-emperor of the French, Napoleon Bonaparte, having escaped from exile on the Island of Elba, landed in France and immediately set about reclaiming his throne. His luck was to hold for 100 days. By the beginning of June he had raised 200,000 men, more than enough to match the combined armies of the Britain and her Allies. On 18th June, 1815 he would face his enemies at Waterloo. 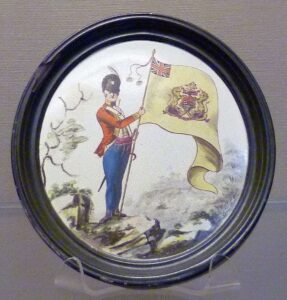 Throughout Napoleon’s career the British press followed him with savage political prints, and Staffordshire potteries made and sold thousands of mementoes (often rude) in the shape of mugs, jugs and other souvenirs to eager buyers. This post looks at some of those souvenirs now in the British Museum. The ‘British Voluntary Infantry’ plaque shown above refers to a Militia regiment, like the one stationed at Meryton in Jane Austen’s Pride and Prejudice. It could be Wickham posing with flag. 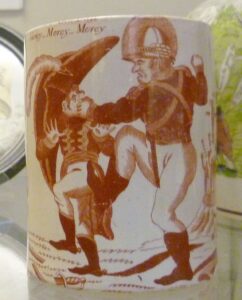 Mug showing a triumphant British soldier twisting the nose of a pathetically small Napoleon who is crying Mercy, Mercy, Mercy.

The war affected the whole country for an entire generation, and the Industrial Revolution really took off. Suddenly the army needed bullets in thousands and it swiftly became uneconomic to cast them by hand – mechanization in a number of directions became imperative – for example, in transport. The canal network expanded fast, as did the improvements in roads and soon coal, iron and steel as well as manufactured goods were able to travel much cheaper and faster by barge and coach. 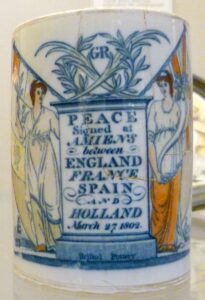 This mug is classy – no crude twisting of Boney’s nose here! It depicts two Classically dressed goddesses symbolizing Peace on the left holding a spray of palm leaves; the goddess on the right holds a cornucopia symbolizing Plenty.

Sadly, the Peace of Amiens lasted barely a year; hostilities resumed in May 1803. 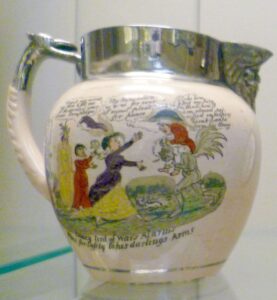 Earthenware jug printed and hand-coloured satirizing Napoleon. It reads: Boney tird of wars alarms Flies for safety to his Darlings Arms. Staffordshireware about 1800

Whoever decorated the above jug can’t spell ‘tired’ and can’t punctuate either! Even with my magnifying glass, I can’t read the writing in the speech bubbles – but I think we get the general idea. 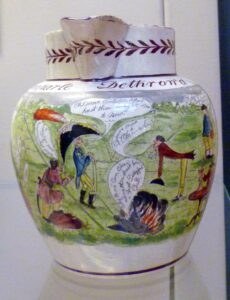 ‘Bonaparte dethroned.’ The label tells us that this Staffordshire jug dates from about 1815 and refers to Napoleon’s abdication and exile

Alas, the label doesn’t explain what exactly is going on. I can see something in flames at the front, and a number of the speech bubbles seem to start with ‘Oh! What hast thou brought me… ’ The rest must wait until the British Museum re-opens when I shall go down with notebook and magnifying glass!

This week’s post is only slim, I know. My apologies, but as I can’t actually get anywhere at the moment, the scope for suitable subjects to blog on seems to be shrinking!

My e-book of The Girl who Liked Giraffes by Elizabeth Hawksley is now available from:

7 thoughts on “Souvenir Mugs and Jugs from the Napoleonic Wars”