One of the things I most enjoy about finding myself in a strange town is looking at the street furniture; that is benches, railings and their finials, door knockers, weather vanes and the like. And some countries are better at producing interesting examples of the genre than others. This struck me most forcefully when I visited Volterra in Etruria. 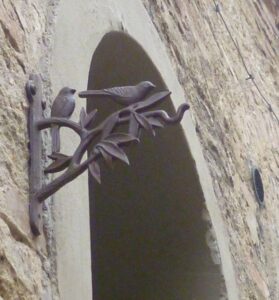 Two birds on a twig with a hook at the end, on the wall of the Piazza del Priori next to a tunnel in the city walls

The metal hook itself did not look particularly old, it could be 20th century, and I think the hook at the end was there to hold something, a lantern, or perhaps a basket with hanging flowers. Whichever it was, it was visually pleasing and I began to look around for more examples.

Water taps and drinking fountains are ubiquitous in Italy; drinking water (well, it’s a hot country) is everywhere and the Italians have very high water quality standards.  One of our company stopped for a drink, and I was struck by how pleasing the shape of the water tap was; it stood on an iron hexagonal base with a four sided column which gradually sloped in to the neat four sided roof. It had a shiny copper tap. 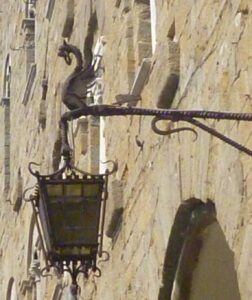 A gryphon lantern high up on a building

This splendid gryphon lantern is set high up and the walls behind it look formidable. I walked round and round it trying to find a good angle to photograph it from.

Volterra is perched on top of a high plateau and the views are splendid. It was founded by the Etruscans, taken over by the Romans in the 3rd century BC, but it managed to remain an important town. It became a Lombard town in the Middle Ages and was eventually taken over – violently – by Lorenzo de Medici in 1472. It has a lot of history.

There is plenty to see: temple ruins, a cathedral, a museum with numerous funerary urns from Etruscan tombs and a Roman theatre. It has much to offer anyone who is interested in history and architecture . 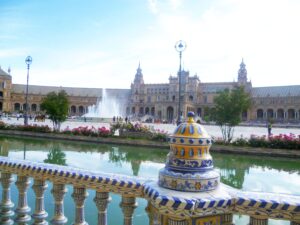 I’m now jumping forward to 1929, to be exact. I don’t know if early 20th century Moorish tiles expanded into a long balustrade – echoing the city which was taken over by the Arabs in the 8th century AD – count as ‘street furniture’. I decided it did – after all, if it had been made of wrought iron, say, it would count. I thought it made a magnificently impressive piece of street furniture. In fact, I fell in love with Seville.

What I found interesting was that the decorative Moorish tiles, used extensively in mosques in North Africa, came to Spain with the Arab Conquest, and, when, several centuries later, the Spanish pushed out the Moors, the Spanish Hapsburg Empire eventually included the Spanish Netherlands. It was the Spanish who brought the art of Moorish tile decoration to the Netherlands where it became known as Delftware.

I had been wondering what Delftware was doing in Seville – but I had it the wrong way round. The question should have been, how did Moorish decoration get to the Netherlands! 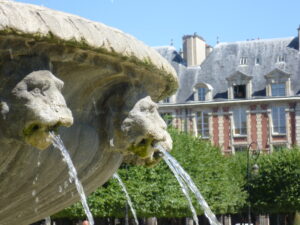 The Place des Vosges, the oldest planned square in Paris dates from 1612. It is, surely, one of the most impressive.

I loved the symmetry of the tall red brick houses with their blue roof tiles; and the fountains with their lions’ head spouts. It’s a lovely place to relax in, and, in one corner, there’s an ice cream café with the most delicious home-made ice cream. 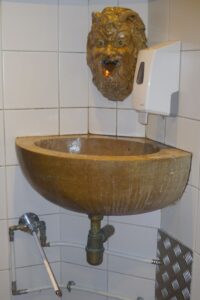 I don’t know if the wash basin in the café ladies’ loo counts as street furniture – probably not – but it’s certainly unusual and I decided that, as it was for the  public, it counted (at least for this post!).

The water comes out of the satyr’s mouth and, to pull the plug to empty the wash basin, you must pull the stick in the bottom left-hand corner. It took me quite a while to work all this out!

Parisian street furniture: the elegant 17th century lamp and the post of a wrought iron gate and railings in the Place des Vosges.

The view is down one of the sides of the Place des Vosges. You can see two lanterns and the well-known phrase from the French Revolution; Les aristos à la lanterne signifying that all aristocrats should be strung up from the street lanterns, made me shiver.

Remove the lantern itself and the resulting iron scroll would be just right to throw a rope and noose over. In fact, if you look carefully you can see that there are three lamps with lanterns hanging from them. You could get rid of three hated aristos.

The iron post is interesting, too. Could that be a head wearing a pom-pom hat at the top of the post? 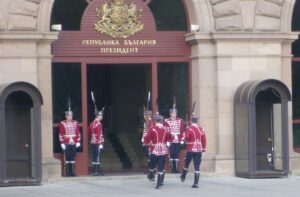 Sofia, capital of Bulgaria. The Changing of the Guard outside the Presidency.

The street furniture here is the sentry boxes – they are modern but with a nod to tradition with their arched tops. I rather like the right hand one which is wired up for something but in a somewhat amateurish manner.

Incredible though it may seem, Bulgaria has a king: King Simeon II – you can see the Royal coat of arms above the door in the photograph. He was born in 1937 and crowned King as a child after the death of his father, King Boris III. He went into exile with his family in 1946 after Bulgaria overthrew the monarchy.

In 1996, after the Communist Party lost power, he was invited back and warmly welcomed; he was even Prime Minister from 2001-2005, but the country remains a republic. 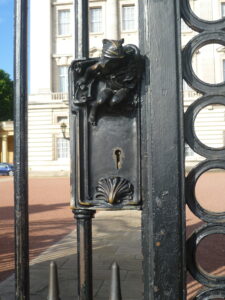 Royal street furniture: a lock from the gates of Buckingham Palace, London

The railings and gates along the front of Buckingham Place are covered with quirky bits of decoration. The lock in the photo dates from the late 19th century. The base of the lock plate has a scallop shell; above we can see a putto or cherub, wrapped in a voluminous cloak which swirls around him as he looks down at the shell. He wears a helmet (with small wings?) but not much else. What is he doing? Why is he dressed in that way? The scallop shell is a signal of direction – for example, if you are going on Pilgrimage to Santiago de Compostela, the scallop shell indicates the route to follow. But that still doesn’t really explain what it’s doing on Buckingham Palace railings.

I’ve come to admire good street furniture and, nowadays, I always look out for it.