The ancient history of Crete has been shaped by forces outside its control. A tsunami resulting from the volcanic eruption on Santorini (ancient Thera) in 1500 B.C. destroyed the Minoan palace of Knossos, and there have been other geological disasters. A massive earthquake in the 9th century A.D. was caused by the collision of two tectonic plates beneath the Aegean Sea, and the resulting tidal wave, suddenly raised the sea level of the ancient port of Lissos on Crete’s south-west coast by ten metres. The city never recovered. 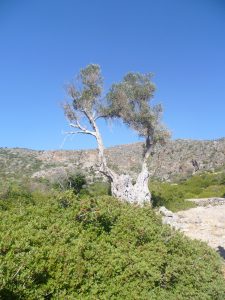 Ancient olive tree amid the ruins of Lissos