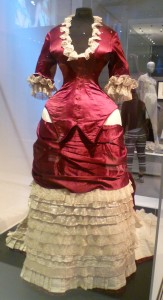 But first, I want to look at what a cuirass bodice actually was. According the The Oxford English Dictionary, a cuirass is a piece of medieval body-armour comprising a back-plate and breast-plate fastened together with buckles or in some other way. The important thing is that it is rigid. 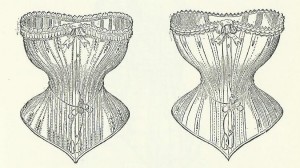 Cuirass corsets steam-moulded from The Milliner and Dressmaker, 1874.

The 1870s cuirass corset was longer than the medieval cuirass and covered the hips as well and came down to a point at the front. It, too, was rigid. The material, usually linen, was stiffly starched and whale-boned before being steam-moulded over an earthenware or metal mould. The result was a rigid garment which made movement almost impossible; on the other hand, it fitted the body like a glove and gave it that desirable svelte curvaceous look.

What is interesting, though, is that the cuirass corset, cumbersome though it was, was also seen as ‘an ever-present monitor indirectly bidding its wearer to exercise self-restraint; it is evidence of a well-disciplined mind and well-regulated feelings.’ Ingenious spin-doctoring is obviously not a modern phenomenon. 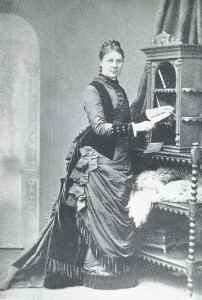 So, back to the cuirass bodice dress. The example above is made from two materials, probably silk and velvet and the long bodice, which comes down over the hips, emphasises the cuirass effect. The sleeves are long and tight and the neckline high, which again is typical. And, at the front, a draped ‘apron’ with fringing is caught up at the side with a row of bows. At the time, trimming was immensely fashionable: flounces, bows, fringes, pleats, ruching, etc., not to mention feathers, lace, and broderie anglaise. In our example, the bottom of the skirt is also fringed; there is a frill round the neck and down the bodice, and four pairs of bright buttons down the cuff. Seventy or eighty yards of trimming might be used on a skirt alone. In ball dresses, even the trimmings themselves were trimmed with tinsel, spangles and beads.

So, why was the red dress so shocking? First of all, its colour. The fashion at the time was for muted colours for daytime: ‘sickly pink and sulky blue’, says one fashion magazine. Or one might go for two different shades of grey, say. But our dress is not just red, it’s scarlet and, furthermore, it’s matched with white, a colour which was usually reserved for petticoats – certainly in a day dress.. Shades of a scarlet women, perhaps. 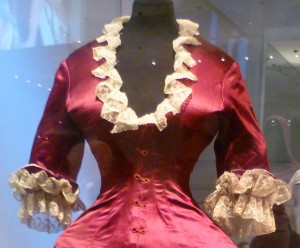 Then, the neckline is scandalously low for a day dress. Of course, there were a variety of day-dresses: walking dresses, morning-dresses (the most informal), afternoon dresses for paying calls, etc. This one is obviously for something a bit special – a preview at the Royal Academy Summer Exhibition, perhaps. It plunges in a U right down to the bust, its shape emphasized by the creamy frill. Décolleté necklines and prettily rounded sloping shoulders were much admired in an evening dress, but not in a day-dress. And there are three-quarter length sleeves, which are not particularly tight. Could this indicate a looseness of morals?

And there’s worse to come. If you look closely at the bodice, you will see that it looks as though it has corset lacing at the front. In other words, what really shocked the dress’s contemporaries was that it looked as though the corset, instead of being hidden and underneath, was now showing and on the outside. And the dozens of white lace flounces in the skirt could almost have come from a petticoat! The wearer would have worn several petticoats, the top one of which would have been as lacy as the wearer could afford.

The ‘apron’ which you can see decorously attached in the black and white photo looks almost loose on the red dress, as if there’s nothing holding it up. One shake, and it might slither to the ground. Already the white ‘petticoat-like’ skirt is showing around the hips. And, in many respects, the dress is shockingly plain! Yes, the white skirt is made up of layers of lace, but there are none of the bows, fringes and buttons in the respectable black and white photo. 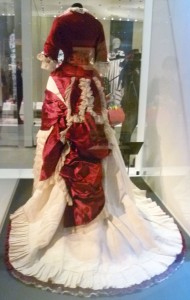 Red cuirass bodice dress from the back

The back of the dress is shocking in a different way. Nothing at the back is as rigid as it should be in a cuirass bodice dress. As the lady walked, the train would sway deliciously and the large, loose gathers – or perhaps they are huge scarlet roses – would move, too. In fact, you can see that the curator has spread out the skirt in such a way that it looks mid-swirl.This is a seductive dress and one has to doubt the owner’s ‘well-regulated feelings.’

Who owned this dress? When did she wear it? And what happened? Because, surely something did. There must be a story there and I’d love to know more about it.