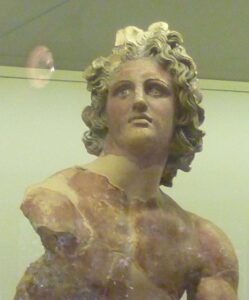 The Etruscan city of Veii was once hereabouts, though much of it was robbed out in the 19th century, either for the valuable objects found there, or for any recyclable material. We do, however, know where the important temple of Portonaccio once stood with its spectacular roof with life-sized painted terracotta gods striding along the top.

The demi-god, Heracles, having captured the Ceryneian hind.

Above is Heracles; he’s not yet a god – he’s still in the throes of performing his Twelve Labours as an act of expiation for having killed his wife and children in a fit of madness. He stands on a stool-like plinth which once straddled the Portonaccio temple roof, together with a very damaged Turms (Hermes, the messenger god), the god Apollo, and Leto/Latona, carrying the infant Apollo.

Heracles stands astride the hind with golden horns – his task was to capture her alive – she was dedicated to the goddess Artemis. The hind is lying on her back between Heracles’s legs, and her feet are bound together. Heracles’s lion skin is half over his head. The raised shoulder indicates that he was holding his club. Note his leg muscles – this is a god in action. 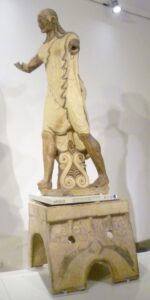 Apollo also wants the hind and he is in pursuit. His left arm may once have held a bow and his right arm is outstretched as he strides towards Heracles. It’s a frozen moment. 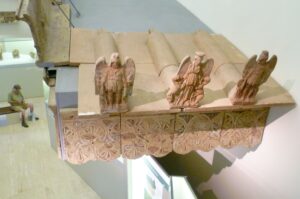 View of part of the roof; the decorative antefixes of winged guardians are there to protect the temple. I’ve kept in the seated figure bottom left to give you a sense of scale.

Veii was also an important artistic centre in the 6th century B.C. The geology of Veii did not include marble quarries but the Etruscans became known for their terracotta statues; many of which still retain some of their original colouring, which greatly adds to their liveliness and feeling of action. 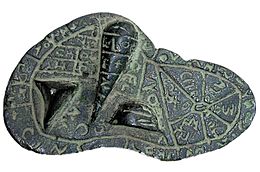 The Etruscans were known as a supremely religious people, famous for their prophesying – it was an Etruscan seer who foretold Julius Caesar’s death on the Ides of March. The bronze sheep’s liver above was as aide memoire for haruspicy, that is divination by examining a sheep’s liver. The life-size bronze sheep’s liver above is marked out in sections with the names of various Etruscan divinities who ruled over the different aspects of life. Etruscan gods weren’t like the gods of Olympus – who were all too human in their wars, love affairs and so on – Etruscan gods were more aspects of the natural world – like the weather god Tinia. 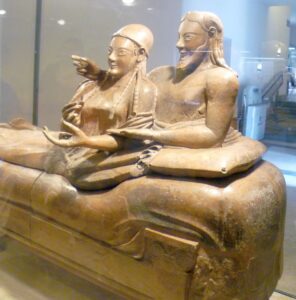 Couple on the funerary dining couch

From the superb tomb in the Villa Giulia, known as the Sarcophagus of the Married Couple, an aristocratic couple are seated on their kline, that is, a dining couch. The couch is on four legs and, if the couple were to get up, you would find that the couch can be opened and that either their bodies, or their ashes are stored inside. The couple actually look very comfortable; the husband’s elbow is resting on a cushion and they seem happy in each other’s company. 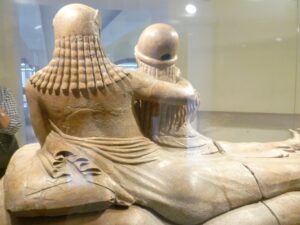 View from the back; the husband’s arm is around his wife’s shoulders

Looked at from the back, the husband’s arm is, touchingly, around his wife. Their serenity is, perhaps, aided by the fact that the Etruscans worked in terracotta pottery rather than marble, and maybe this softer medium inclined itself to a more friendly view of the world rather than the rigidity of cold marble. 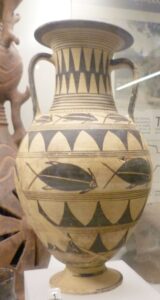 The Etruscans’ artistic sophistication can also be found in their grave goods. I love the double handled jar above with the stylized fish and geometric shapes. It’s full of joyous movement. 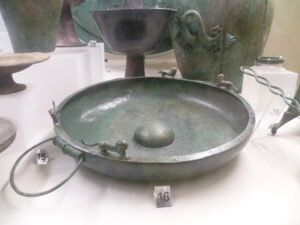 Etruscan metalwork skills were also of a very high quality; I was very taken with this bronze bowl with four lions walking delicately round the rim. I wondered what you would cook in it – because surely it belongs in the kitchen and is meant to be used.

This large perfume dispenser  – at least chest high – speaks of sophisticated gatherings, maybe even parties; though, it could, of course, be for a funeral party – it would depend on the perfume used.  Myrrh or frankincense would be suitable for funeral rites – a lighter scent would better suit a less formal occasion. 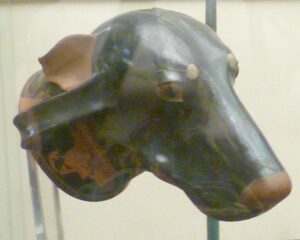 This beautifully modelled hound’s head looks like a portrait of a known and much-loved animal and, when I saw it, I wanted to stroke it. 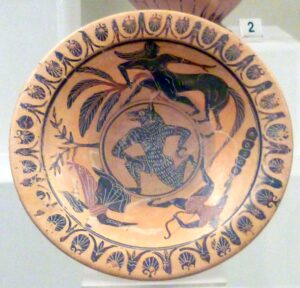 I’m ending with the mysterious plate depicting the centaur, half man – half horse, at the top of the plate, who is pursuing Deianira, Heracles’s second wife – we can see her flying drapery as she flees. On the right, we see Heracles in pursuit with his raised club; he will kill Nessus for this outrage. But Nessus has one last trick up his sleeve; with his dying breath he tells Deianira that his blood-soaked shirt is a love charm, and he gives it to her. What he doesn’t tell her is that the shirt has been poisoned by the Hydra’s blood.

Some time later, Heracles falls in love with Princess Iole, and Deianira, desperate to win back her husband’s affection, sends him Nessus’ shirt. But the moment Heracles puts it on, the poison takes effect. In agony, Heracles orders a funeral pyre to be built and flings himself onto it. He dies and Dejanira then kills herself. Heracles was carried to Olympus and, in recognition of his outstanding bravery, he was made a god.

And the mysterious wolf god in the centre of the plate?  No-one knows. A dæmon, suggests one expert – which is not very helpful. 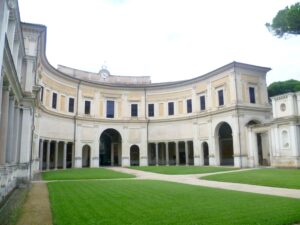 The Villa Giulia, once the summer palace of Popes, now the Etruscan Museum.

I hope you have enjoyed this visit to the Villa Giulia. It is easily accessible from Rome and is well worth visiting.

8 thoughts on “The Etruscans at the Villa Giulia”