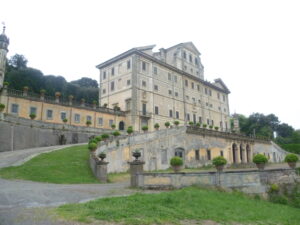 What is unusual is that, unlike other villas of this importance, it has stayed in the Aldobrandini family and has not been taken over by the state. Selected groups can visit it and, when I went, our visit was timed carefully so as not to disturb the Principessa. We couldn’t see inside the villa but the water theatre, or nymphæum, in the courtyard behind the villa was absolutely spectacular. 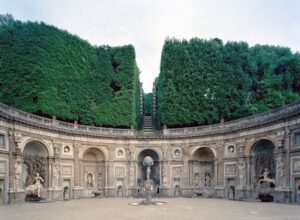 A view of the centre of the courtyard

What we see here is the water theatre with five niches, the three larger ones contain, on the extreme left, an over life-sized statue of the god Pan, lazily sitting, one leg stretched out playing the pan pipes; a central huge statue of Atlas, supporting a globe representing the world on his shoulders; and to the right, a centaur – half-horse, half-man rearing up. A fountain stands directly in front of Atlas.

Above the elaborately carved and decorated stone cliff face is a circle of tall, clipped evergreens. In the centre we can see steps going up which leads to oak and chestnut woods. Also up there, underground, are the remains of the water engineering which made all the water features work. Alas, they were bombed by the American air force during World War II.

So let’s look at the statues more closely; one might ask what Greek pagan gods and heroes are doing in a water theatre belonging to a Cardinal? During the Renaissance, children of the Italian nobility were educated in the Classics; they were familiar with Greek legends and, furthermore, as educated Renaissance men (and occasionally women), they were widely read in philosophy, astrology and alchemy, they understood, and enjoyed discussing, their symbolical, philosophical, and even mystical, significance. 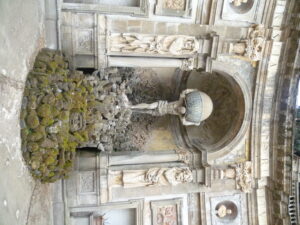 Atlas supporting the globe of the world

Atlas, for example, supports a multi-spouted bronze globe of the world – which was once also a fountain which span round in a whirl of water. For the Aldobrandinis, the globe symbolized the universal nature of Pope Clement and Cardinal Pietro Aldobrandini’s support for both peace and Christianity. Originally, Atlas was helped by the hero/god, Hercules, but he, alas in now missing. Together, they overcame Tantalus, whose grotesque head we can see among the stones at Atlas’s feet. Tantalus’s crime was to steal the food of the gods; and his punishment was to be buried up to his neck and ‘tantalized’ with food and water which he could never reach. Perhaps Tantalus’s presence here symbolizes Atlas and Hercules crushing the enemies of the Aldobrandinis.

And, of course, the size and strength of Atlas and Hercules symbolically glorified the power of Pope Clement and Cardinal Pietro Aldobrandini 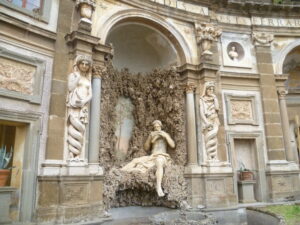 Originally, when the water fountains worked, the pan pipes actually played a tune. Pan was the god of flocks and shepherds; he was also associated with ‘panic’ the groundless fear that travellers in lonely places sometimes felt. In the reign of the Emperor Tiberius, a ship full of people sailing past the island of Paxi heard a loud voice crying, ‘The great god Pan is dead!’ The emperor ordered an enquiry but no satisfactory explanation was found.

Later, in Christian legend, this incident was associated with the coming of Christianity, and it may explain why Pan has his own niche here. His time is over, and Christianity has triumphed. 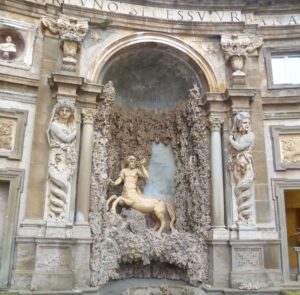 Centaurs were a tribe of wild creatures, half horse, half man, who lived in wooded mountains. For the Ancient Greeks, they represented primitive desires and anti-social behaviour: fighting, chasing women and drinking. One can see that these were attributes that Pope Clement and Cardinal Aldobrandini would not wish to encourage. (Though that seems a bit rich, considering what some of the Popes and Cardinals got up to.) The time for the centaurs and Pan has passed, is perhaps what their statues in the niches symbolized for the Aldobrandinis. 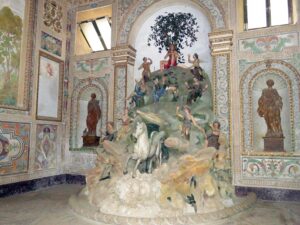 The Chapel dedicated to Apollo

This is a sort of indoor nymphæum, a fountain dedicated to the god Apollo and the nymphs on Mount Parnassus, a mountain north of Delphi, traditionally sacred to Apollo and the Nine Muses. Apollo was one of the twelve Olympian gods; he was a symbol of ‘light’, manly beauty and reason. He was also concerned with music, the arts and prophecy. Mount Parnassus itself gradually came to symbolize the Arts.

Nowadays, sadly, there is no water in the Apollo chapel but it is still an extraordinary place. Nymphs cavort about on Mount Parnassus. The whole is painted in bright colours and, in the foreground, a white Pegasus with golden wings is about to leap onto the floor.

An English lady visitor came to see it in 1821 – when everything worked. She wrote: Giants, centaurs, fauns, cyclops, and gods, blew, bellowed, and squeaked without mercy or intermission … the strains that suddenly burst forth from Apollo and the nine muses, who were in a place apart, compelled us to stop out ears … When this horrible din was over we were carried back to admire the now silent Apollo … I was sitting on one of the steps at the door, waiting on the pleasure of my companions to depart, when, to their inexpressible amusement, water started to spurt up suddenly beneath me, and all around me, drenching me with a shower from the earth instead of the skies…

Poor woman, but perhaps it served her right for being so snooty about the marvels she had just seen and heard.

4 thoughts on “The Extraordinary Water Theatre at the Villa Aldobrandini”