Today, I’m taking a walk along the Regent’s Canal from the Angel, Islington, to the Kingsland Basin, en route to the London Docks. 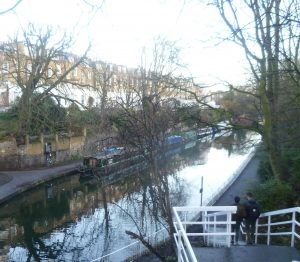 Looking down on the canal from the bridge above Islington Tunnel, I can see the backs of the houses in Noel Road. In the 1960s the whole area was run down, derelict and renting was cheap. One of the area’s claims to fame – or notoriety – was the playwright, Joe Orton, who lived at 25 Noel Road, was murdered here by his lover, Keith Halliwell in 1965. 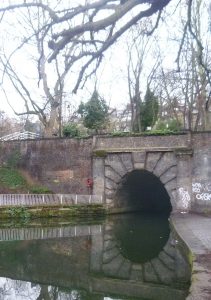 I come down onto the towpath by Islington Tunnel and the view instantly opens out onto the City Road Lock. You can see the lockkeeper’s cottage hiding behind a willow. The temperature is barely above freezing but it’s already starting to green up. 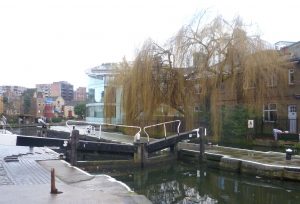 Almost immediately I come to the City Road Basin opening out on my right. It used to be full of mouldering warehouses but these have been either demolished or renovated. Work is still going on; you can see the cranes in the background. The canal is now much used; there is a children’s kayaking club, for example, and the towpath has a relaxed, friendly atmosphere. People smile at you and are happy to talk. A fisherman has left his rods and umbrella, and his cycle lies on its side next to them but he’ll be back. 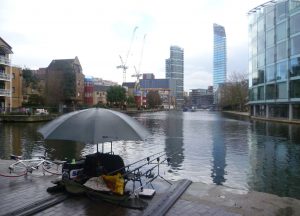 A bit further on, I can hear shrieks from the children in the Hanover School playground on my left. They have their Towpath Garden here and a series of four, specially-commissioned mosaics enliven the walls. 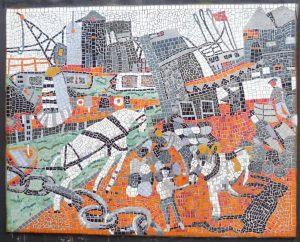 The first mosaic is a lively collage of canal life as it was. The working horses are towing the barges; we can see cranes, goods, warehouses and the men who worked here. In the 1820s, Islington was enjoying a building boom. The canal was lined with timber wharves for wood, bricks and other goods needed to build hundreds of houses – my own included. 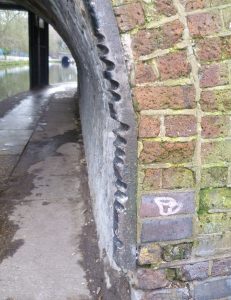 The grooves worn by the friction of the ropes

On the edges of the tunnels you can still see the grooves worn by the ropes pulled by the horses as they hauled the barges along the canal. Goods came from the Midlands en route to the newly built London Docks. And goods from all over the world came up the Thames from those docks, and were then distributed to the rest of the country via a network of canals. 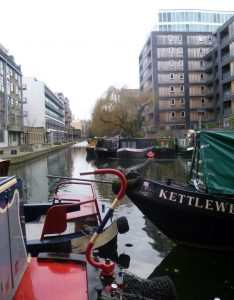 The Wenlock Basin. The building on the extreme left may be an original warehouse, now turned into a des. res. block of flats.

Unlike the King’s Cross stretch of the canal, where regeneration along the canal is pretty well complete, there are still sections of this stretch which remain in a state of decay, like the rusty and graffiti-covered Packington Street Bridge. 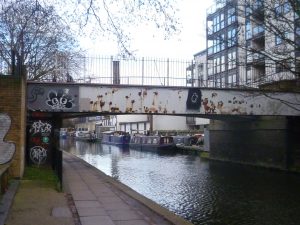 The long line of what was once a timber warehouse is now the Commissary Bar and Kitchen. The large barges moored in front of it are permanent and can be hired out. There is a ‘quiet’ policy along the canal; people live here, and pubs and eating places are asked to respect their neighbours’ peace. 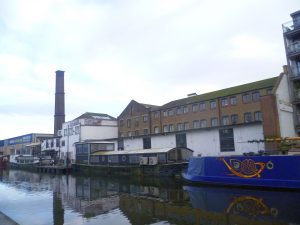 The Commissary Bar and Kitchen, once a timber warehouse

The canal is for the enjoyment of all and there are a number of mosaic ‘fish’ benches to sit on and enjoy the view.

One of the fish benches

There are six locks along this stretch of the canal and, at Sturt’s Lock, I meet Riva manoeuvring her small boat single-handed into the lock. It is do-able but fiddly as she keeps crossing perilously over the lock gates making sure that one set of gates is open and the other closed, so that the water level sinks and allow her boat to move downstream. 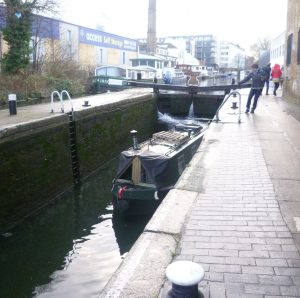 Finally, she’s through and waves goodbye. 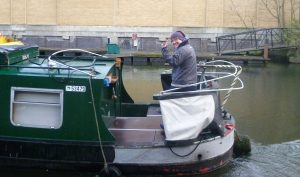 I come to a stretch where boats are moored two deep. How on earth can you move if you’re moored by the towpath with another boat on the canal side blocking you in? 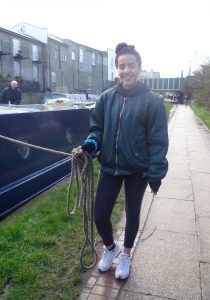 I met Matthew and Lilac who are doing just that. Lilac holds the outer boat’s towrope and they pull it gently to an angle where Matthew can edge the Verity out into the canal. Once that is safely done, Lilac pulls the outer boat’s towrope back towards the towpath and, between them, they gradually slot it in neatly where the Verity had been and secure the towrope to a ring on the towpath. It is painstaking work, and it must be done with care. 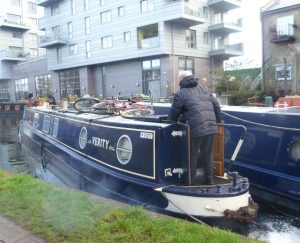 Lilac tells me that they have free mooring here but only for a week; then they must move on. They are going a couple of miles downstream to Victoria Park. I wave them on their way. 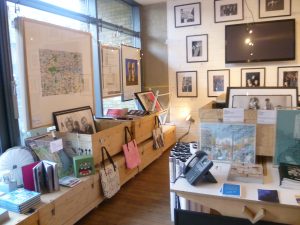 I am now nearing my destination, the Kingsland Basin. Just before I get there I notice an unusual shop I haven’t seen before: it’s the Archivist Gallery and pop in. It’s a friendly very modern space. Susanna, in the office-cum-shop, tells me that they opened last year and show-case the work of various up and coming artists.

We have a brief discussion on the problems of publicity when starting up a business and then I leave. 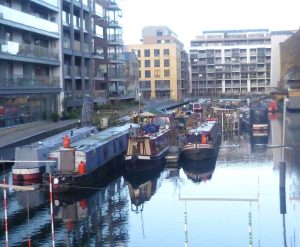 I have reached Kingsland Basin. I have a friend, Ben, who lives on a narrow boat here with his wife and two small children. The hull of another narrow boat is moored next to their boat which he’s filled with earth and turned into a garden. His wife, Polly, says that the problem with living on a narrow boat is that you can’t quarrel. You can’t leave the room in a huff because there’s nowhere else to go. The most you can do is go outside and take a couple of deep breaths!

I am not here to visit them this time. The sun is getting low on the horizon and it will take me a good half an hour to get back to the Angel. And it’s cold. So, I turn round and head for home.

4 thoughts on “The Regent’s Canal: Angel to the Kingsland Basin”