This week I’m looking at a poem/picture about love: a tale of a fatal attraction between two children. She, Maud, is a woodman’s daughter; he is the squire’s son and they meet in his father’s woods where Maud’s father, Gerald, is clearing the undergrowth. The story comes from Coventry Patmore’s 1844 poem The Woodman’s Daughter.

The young Pre-Raphaelite artist, John Everett Millais (1829-1896), came across the poem and made it the subject of his 1851 Royal Academy painting. 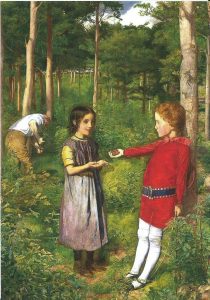 This extract from Patmore’s poem hung next to the painting.

She went merely to think she helped;/ And, whilst he hacked and sawed,/ The rich squire’s son, a young boy then,/ For whole days, as if awed, /Stood by, and gazed alternately/ At Gerald and at Maud.

He sometimes, in a sullen tone,/ Would offer fruits, and she/ Received them always with an air/ So unreserved and free, /That half-feigned distance soon became/ Familiarity. 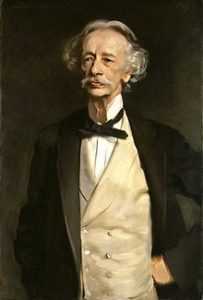 So what’s going on? How do we know that their relationship will be a disaster? And what happened?

To start with the squire’s son, dressed in his long red jumper and wholly unsuitable white tights and strappy shoes. Jeremy Maas, the Victorian art expert, called The Woodman’s Daughter Millais’ first contemporary painting, which surprised me. But the long red jersey was seen as suitable holiday wear for Victorian boys, ‘They do not impede boys’ movements…yet being woollen they keep the body in a due state of warmth and prevent all chills,’ the late 19th century magazine, Myra’s Journal, tells us.

I cannot explain the wrinkly white cotton tights; I’d have thought that they’d show the dirt too easily. Still, a squire’s son would doubtless own other pairs. But we should also note his red hair. The traitor Judas, traditionally, had red hair. The 1851 R.A. visitors would have understood at once that the squire’s son was trouble. He might hold strawberries out to Maud with one hand, but the other holds a switch.

His body-language also expresses his ambivalence. One foot is awkwardly turned in; he’s leaning casually against a tree but he’s not at ease; and his look is petulant to say the least. If he’s attracted by Maud, it’s unwillingly. And his clothing not only looks out of place, it provides a vivid contrast to what Maud is wearing.

Millais took some trouble with Maud’s outfit. In January 1851, he wrote to a Mrs Coombe asking for her help in getting hold of some old boots for his model for Maud, and added: If you see an country child with a bright lilac pinafore on, lay strong hands on the same, and send it with the boots.’

We can see the Mrs Coombe was successful. Maud wears a shabby lilac pinafore over a short-sleeved blouse – possibly cut down from a worn-out adult one. She has a simple bead necklace and her short hair is parted in the middle.

Coventry Patmore himself disliked the portrait of Maud. He called her, ‘A vulgar little slut.’

The picture is painted with great intensity; every leaf in the mass of undergrowth is detailed. It gives the viewer of a sort of psychological dislocation. We are physically very close to Maud and the squire’s son, practically standing on the boy’s feet. And the intensity of the boy’s gaze and Maud’s open-handed pleasure ominously foretells their later relationship. But there can be no marriage between Maud and the squire’s son; class differences prohibit it. 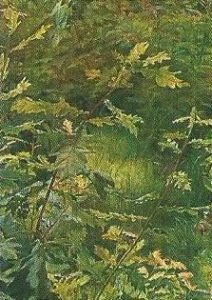 She and her father are perfectly at home in the wood; they understand it. The oak leaves in the foreground symbolize Gerald’s integrity, compared with the boy’s outthrust hand holding the strawberries. He is like a virus – even though he himself will eventually own the wood – and he will destroy Maud. What lies ahead is an illegitimate baby drowned, and Maud’s descent into madness.

The picture proved difficult to sell.

The Guardian suggested a possible reason. ‘The figure of the girl is strictly true to nature, but will, no doubt, be a scandal to lovers of picturesque costume, who object to the appearance of female rustics in pictures otherwise than in fancy dresses and with fair skin.’ In other words, Little Bo-Peep with dancing blonde curls and blue eyes – fine; but a dark-haired girl in a grubby lilac pinafore is a no-no.

For the Victorians, it was a cautionary tale about class distinction. Nowadays, a hundred and sixty years later, there would be a different ending for Maud. And, one hopes, the squire’s son would get his comeuppance. 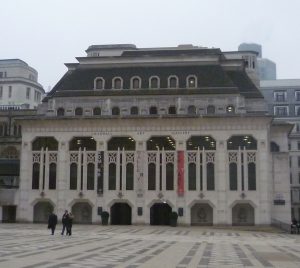 Today, the painting is in the Guildhall Art Gallery in London, which has a fine collection of Victorian paintings. The entrance is free and it is well worth a visit.