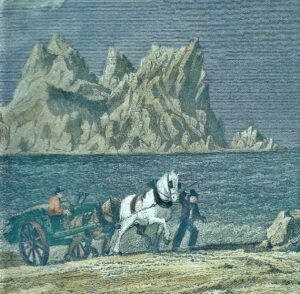 Gradually, I learnt how a novel worked though, inevitably, I got myself in some terrible muddles – and this blog is about one of them; the problem of ‘the emotional vacuum’. My last childhood novel was The Sound of the Sea, written when I was incarcerated in a boarding school. It is very Daphne du Maurier – I’d been reading her Frenchman’s Creek – a smuggling story set in Cornwall during the Napoleonic wars. My hero, Roland de la Tour, is a dashing French smuggler; my heroine Bronze, a red-headed lame orphan, who knows nothing of her parentage.

Bronze has been adopted by an exciseman and his wife. After settling in, she goes exploring and finds herself in a cave. 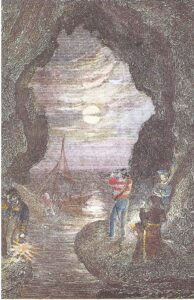 The passage turned abruptly and became a winding staircase. It had been hewn by hand and parts of it were wider than others. It was always difficult for Bronze to get up or down steps and she moved slowly. Soon she became tired but was determined to struggle on. Then she heard footsteps. She listened – but they were not the echo of her own. She blew out her candle and waited in one of the wider places, hoping they would not see her. She could feel her hands trembling. The steps could be heard more distinctly now. Then voices. Then the orange glow of a lantern.

The leader, who held the lantern, was a cultured Frenchman, Bronze could tell that immediately by his voice, and then by his bearing. Bronze held her breath and held onto her crutch for support. It slipped and sent a small cascade of stones down the stairs.

He came up the steps, stopped and held up his lantern. He saw a young girl wearing a dark brown dress standing frightened, yet dignified, against the wall. In one hand was a smoking candle, the other held the wall for support. Wind-swept hair framed her face and tumbled over her shoulders. Her large grey eyes were dilated with fright. 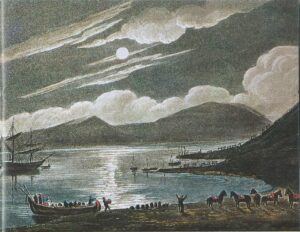 He handed his lantern to one of his men.

‘Who are you? What are you doing here?’ She did not reply. He shrugged. ‘You’d better come with us.’

‘Would you mind picking up my crutch? I am unable to walk without it.’

He was astonished at her dignity. Her voice was calm although it trembled very slightly.

It was that slight quaver in her voice which decided him. He knew fear was no sin but he admired her bravery in trying to suppress it. He picked up her crutch and handed it to one of his followers. She had beautiful hair, he noticed; the colour of one of his mother’s copper pots in the firelight.

‘You’re tired,’ he said gently. She nodded. For some unknown reason his heart began to thump. He picked her up and, as he carried her towards the hut, he became aware that his hands were trembling. 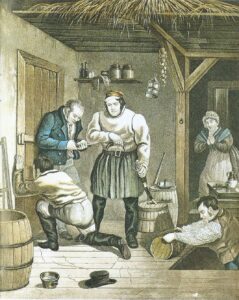 Smugglers Alarmed: note the trapdoor to a secret cellar. Print courtesy of the National Maritime Museum

Roland and Bronze have various adventures together and, naturally, they fall in love. Roland is captured and sentenced to hang, believing Bronze has betrayed him. Of course, she rescues him. Then Roland indulges in a fit of nobility and renounces her: he can’t ask her to share his life of danger, etc. Naturally, she is upset – and furious. About two thirds of the way through the story, I whisked a seriously miffed Bronze off to London for the Season and left Roland in Cornwall.

Once in London, Bronze meets the quiet, gentlemanly Sir Miles Langley, who also falls in love with her. Suddenly, my book stopped being Daphne du Maurier and turned into Georgette Heyer.

Here I am in Georgette Heyer mode. Miles is escorting Bronze back to his carriage.

One of Miles’s horses was a bit impatient at seeing so many other horses and it was all Sir Miles’s tiger could do to steady him.

‘Harry!’ shouted Miles, ‘Can’t you keep that animal under control?’

The horse laid back his ears and snarled at Bronze, who clung to Miles’s arm. Several carriages rumbled by and the horse shied. Harry quietened him and Miles led Bronze forward to hand her up. Suddenly, a carriage squealed to a standstill in front of them and the noise made the horse rear. Its evil mouth opened and its wicked eyes became red slits. It lunged savagely at Bronze to bite her. In a flash, Miles leapt in front of her and the horse’s teeth sunk into his arm.

‘Oh, Miles!’ cried Bronze, quite forgetting his title. ‘Oh, my poor Miles, are you hurt?’

‘A mere scratch,’ he replied, showing an arm with blood pouring down his sleeve.’ 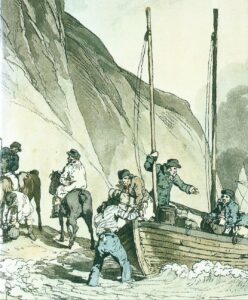 Oh dear! I found myself shrieking with laughter when I re-read this bit, but, at the time, I thought it was one of the best things I’d ever written.

Bronze was very tempted by Miles, and so was I. My plot was in serious danger of coming unstuck. Bronze couldn’t possibly go off with Miles. I’d planned for her to marry Roland.

Here she is, pondering on her dilemma:

Gradually, through feeling the strength of Miles’s love, the thought came to her, and she tried to suppress it: if Roland loves me as much as he says he does, why does he not give up smuggling if he does not wish me to share his life of danger?

And Mrs Vane kept on advising Bronze on how to hook Sir Miles. ‘But,’ she ended, ‘if you are in the slightest bit uneasy, Bronze, I would refuse him. Little doubts can grow to enormous proportions, you know, and can cause a life time of unhappiness.’

Bronze felt it could apply to herself and Roland. But every time she recalled him, his dark passionate eyes, his tanned skin, watching him striding over the rocks, wetted by the sea-spray and blown by the sea gales, or the remembrance of his arms around her and his deep, caressing voice, she knew she could not forget him to make Miles happy, for, for all his faults, Roland and she had the same wild spirits and passionate natures. 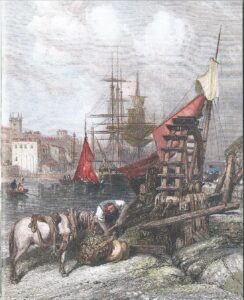 Falmouth, a major port for contraband in the 18th century

I realized that I’d stupidly allowed Roland to be off stage for too long. What was I going to do? I pinched a bit of Georgette Heyer’s These Old Shades and nicked the ‘foundling’ solution from Oscar Wilde’s The Importance of Being Earnest. Bronze’s true story comes out. She is, in reality, the Lady Theodora Verney!

‘ The cruel Mary Verney refused to recognize her baby daughter, for she had wanted a son, and her husband, Sir Henry, had, in desperation, hidden the baby in one of his wife’s hat boxes and sent it off on the Royal Mail Coach to Cornwall.’

After a bit more manipulation, I got Roland to London and he and Bronze came together. Here is the scene where Sir Miles discovers Roland and Bronze in a clinch. A gentleman to the last, Miles is about to leave the room.

Roland looked up and said, ‘Are you by any chance Sir Miles Langley?’

‘I am.’ Miles came back into the room.

‘Oh dear,’ said Bronze, colouring painfully, ‘Do come in, Miles. This is, er, my fiancé …’

‘Roland!’ cried Bronze, ‘Are you really a count? Why did you never tell me?’

‘You never asked me, my dear,’ he replied, grinning at her.

Miles broke in, ‘In that case, Monsieur le Comte, let me present you to the Lady Theodora Emily Teresa Verney.’ 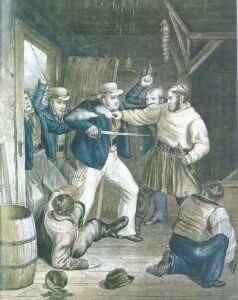 Smugglers attacked.  The revenue officers may have swords but the smugglers have guns. Print courtesy of the National Maritime Museum.

‘Mon Dieu!’ indeed! Whew! The book was back on track and Miles, now surplus to requirements, nobly goes off to fight the French under Wellington in the Peninsular War. The last paragraph in the book tells us what happened. Bronze, now married to Roland, receives a letter from the War Office.

We regret to inform you that Colonel Sir Miles Langley was killed in action at Ciudad Rodrigo, he expressly desired that you should be informed. We offer our sincere sympathy to you on your bereavement.

The moral of this blog is: Beware the dangers of allowing an emotional vacuum; it can all too easily lure your heroine (or hero) off track and cause you no end of problems.