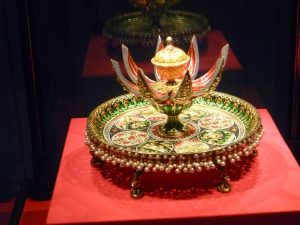 Albert Edward, Prince of Wales and future King Edward VII, had a notoriously difficult relationship with his mother, Queen Victoria. Throughout his life, she treated him as an irresponsible child and refused to give him any political responsibility. The inevitable result was that he enjoyed living up to her worst expectatiions, behaving as a pleasure-loving roué in Town, gambling, and pursuing women in the full glare of publicity, or, at Sandringham, hosting large shooting parties and bagging innumerable game birds, together with the inescapable over-eating and drinking. Sandringham House party group photographs show his guests ranged around the Prince, who is firmly centre stage and standing next to the prettiest lady. 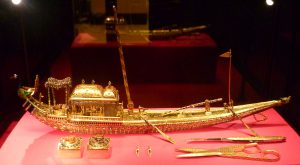 2. This peacock barge inkstand, presented by the Maharaja of Benares, is modelled on a state barge which took the Prince on a trip down the River Ganges. It is made of gold, enamel, diamonds, pearl, sapphires, rubies, glass beads, silver-gilt thread and silk.

However, in spite of his playboy image, there was another side to the Prince. He became significantly involved in a number of hospital charities; for example. He spoke excellent French and German; travelled widely in Europe; his early diplomatic visit to Canada had been a success; and he was obviously interested in foreign affairs. None of this changed his mother’s opinion.

3. This water crucible and steel dagger and scabbard cunningly incorporates loose pearls that travel along a channel in the blade when tilted.

When it came to his proposed visit to India in 1875-6, the Queen was decidedly ambivalent about allowing him to go. She had visions of ghastly scandals or louche behaviour which would bring the Crown into disrepute. But she may also have been jealous of the prestige it would bring the Prince, if the trip were a success. 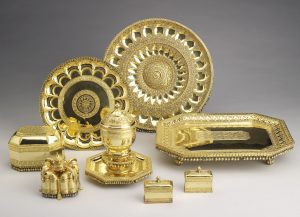 4. This magnificent Service of State, or durbar set, contains ceremonial objects such as a perfume-holder, rosewater sprinklers and a betel-nut holder.

By 1875, more than half of the Indian subcontinent was governed directly by the British Crown; the remaining states were ruled, semi-autonomously, by Maharajas under the ‘guidance’ of resident British governors. The object of the royal tour was for the Prince to visit the Maharajas with the aim of establishing personal relationships and strengthening ties with Britain. He would take part in the Maharajas’ royal durbars (courtly visits involving exchanges of gifts and much ceremonial) and learn about their culture, history, religion and traditions. 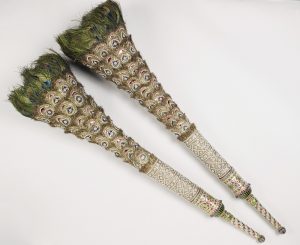 5.  A pair of enamelled peacock feather fly whisks, inlaid with diamonds and set with layered bands of gold tinsel.

It could all have gone horribly wrong. But it didn’t. The Prince worked extremely hard to ensure the tour’s success; he did his homework and was well-prepared. His outlook had always been cosmopolitan, and he enjoyed meeting the Maharajas, whom he treated as social equals – which is more than many of the British political officers in India did. He instinctively understood the part the Maharajas expected him to play, which could be described as theatrical ceremony.

As part of the proceedings, a number of tiger and elephant shoots were arranged for him. Here, the Prince’s excellence as a shot came into its own. Killing elephants was part of feudal India and, after one elephant shoot in Ceylon, the Prince climbed on top of his kill and cut off its tail in the traditional way, as was expected of a prince. (It has to be said that some of the British press were decidedly critical.) 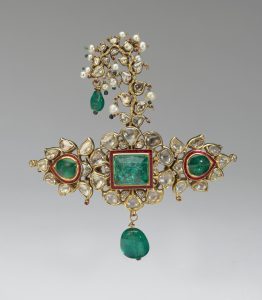 6.  Emerald and gold enamelled turban ornament presented by the Maharaja of Udaipur

The foreign office realized that the British gifts of books, presentation swords and jewellery made by Garrard and Co., the crown jewellers, however beautifully made and presented, could not compare with the magnificence of Indian jewellery and craftsmanship. They did their best to put the brakes on too much opulence by asking that no gift should be made especially for the Prince’s visit; that the objects should show off local skills; and that old arms and armour would be very acceptable. 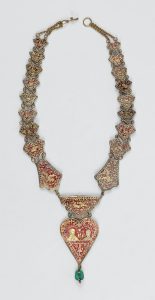 7.  Necklace in gold and enamel with hanging emerald,  featuring depictions of the Prince and Princess of Wales, presented by the Rajah of Ratlam. The Foreign Office’s request that no gift should be specially made was not always adhered to.

The Prince exchanged gifts with over ninety rulers during his four month tour and received over 2000 gifts, all of them top quality both culturally and artistically. On his return to Britain, he organized a public exhibition of the gifts at the South Kensington Museum (now the Victoria & Albert Museum). They excited a huge amount of interest and over 30,000 visitors viewed the collection in the first week alone. For the next seven years, the exhibition toured Britain and Europe to great acclaim. 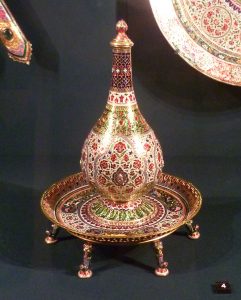 8. This enamelled bottle and salver, part of a set is made of gold, enamel, diamonds and rubies, was presented by the Maharaja of Jaipur

Not only did the magnificent items raise awareness of the superb craftsmanship of the Indian subcontinent, it also, of course, increased the prestige of the British Empire.

I really enjoyed this exhibition: Splendours of the Subcontinent: A Prince’s Tour of India, 1875-6, now on at the Queen’s Gallery until 14th October, 2018. The items are wonderfully varied: from jewellery and weaponry, to exquisite enamelware and peacock feather fans. And the stories behind some of the objects add greatly to the visitor’s enjoyment. It also allows the visitor to see the future King Edward VII in a different light. He was not just a playboy; he had something both solid and valuable to bring to the British monarchy. It’s a pity he had to wait for so long before being allowed to use his talents.

Photos 1, 2 and 8 by Elizabeth Hawksley