I’ve just collected a box containing nine books from the library of a ninety-three-year-old cultured and elegant lady I’d known for many years who died last year. She left a number of her books and runs of architectural magazines to various museums and institutions, and the rest were to be shared out among her many friends. A few months after the funeral, I got a book list of well over 1500 books – I could choose as many I liked and it was, more or less, first come, first served.

The experience of looking through the huge list, printed in minute 8pt, was a bit like exploring Aladdin’s cave, with dash of delving into a bran tub. All I had were the titles and author; I had no idea whether the book was large or small, paperback or hardback. They were divided into sections covering the Contessa’s areas of interest: Architecture, Italy, History (social and cultural), the Arts, European Royalty, etc. and a small selection of fiction.

THE ETRUSCANS: History and Treasures of an Ancient Civilization 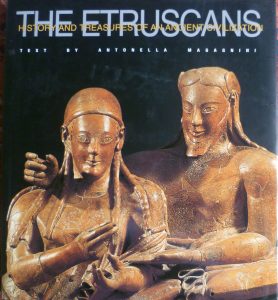 When I got my box home and opened it, I found the magnificent THE ETRUSCANS: History and Treasures of an Ancient Civilization, by Antonella Magnanini who obviously knows her stuff and writes in an intelligent, accessible style. The book is impressively large, on glossy paper with lots of wonderful double-page photographs.

I went on an Etruscan holiday in 2016 and I was delighted to recognize most of the objects and places discussed in the book. The detail in the photographs, too, was way above my own snapshots and I am absolutely thrilled to have it. 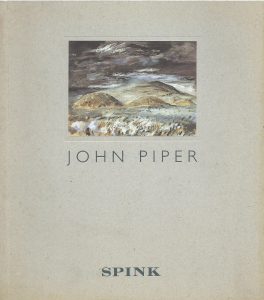 The next book was a slim catalogue of a JOHN PIPER: Early Oils and Watercolours exhibition in 1996 by Spink & Son Ltd of King Street, St James’s. It has colour photographs of twenty-two of the thirty odd paintings in the exhibition. I’m a John Piper fan; he had the gift of being able to capture the essence of a place – its atmosphere as well as the topography in what looks like a quick sketch. But of course, it’s the result of a superbly-trained eye and years of practice and hard work.

This is a book I shall dip into often. 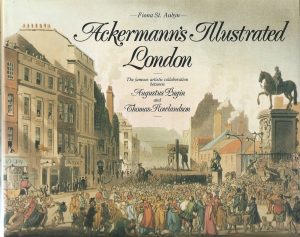 ACKERMANN’S ILLUSTRATED LONDON, edited by Fiona St Aubyn, is based on the original three volume book of 1808-1810 with illustrations by the eminent architect Augustus Pugin and the satirist, Thomas Rowlandson, on the London of their times. This is a boon for historical novelists. Not only did Pugin and Rowlandson depict famous places, like the Bank of England and Westminster Bridge, Rowlandson also peopled them.

Take the painting of the Mint, which shows men at work, shirt sleeves rolled up, in the actual act of engraving, weighing, and striking coins – together with the assay masters overseeing the work. There is a detailed description of what is going on.

The Newgate Prison Chapel illustration looks down on the condemned prisoners, both men and women, sitting around a coffin placed on a table in an enclosure in the middle as the chaplain preaches the ‘condemned sermon’. The other prisoners sit separately, and eager sightseers in the gallery look down. The editor, Fiona St Aubyn, quotes Rowlandson, and also explains the significance of what we are seeing.

This is an invaluable book for a novelist and I’m a Rowlandson fan, anyway. I love his cheerfully cynical eye as he dissects the goings-on of his fellow human beings. 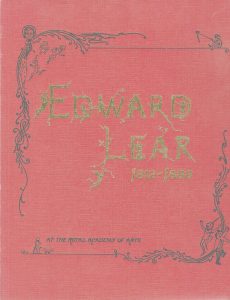 The EDWARD LEAR 1812-1888 book turned out to be the catalogue for a major exhibition of his works at the Royal Academy in 1985. I actually remember going to this exhibition – a kind friend took me – and I’m delighted to have the catalogue, even if thirty-three years after the event! I’d known Lear for his Nonsense Rhymes and poems like The Owl and the Pussy Cat, of course, but I hadn’t realized that he was a very talented watercolourist as well.

The book is far more than just a catalogue, it contains a number of essays on Lear as watercolourist (he gave drawing classes to Queen Victoria) and there are some beautiful landscapes of various places, including Albania’s Mount Tomarit with its distinctive outline, which I visited in 2015. Lear travelled widely, not only within Europe but also in Egypt, the Holy Land and India, painting the birds and animals as well as the scenery.

I’m glad I chose it and I shall enjoy reading the essays and examining the paintings with new knowledge. 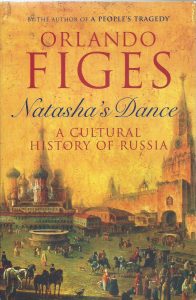 NATASHA’S DANCE (A Cultural History of Russia) by ORLANDO FIGES

I chose Natasha’s Dance because I missed it when it first came out. Now I have my own copy, I’m looking forward to reading it. I discovered Dostoyevsky when I went to university and he led me to other Russian writers. (I actually read English at university but we all did a ‘Modern European Mind’ course in the first year which introduced us to writers the university felt we should know.) My goodness, it was a culture shock, plunging into Kafka, Thomas Mann, Flaubert, Freud, Nietzsche etc. but I’m very glad now that I did it.

I recently reviewed Jonathan Miles’s epic St Petersburg: Three Centuries of Murderous Desire, and Natasha’s Dance will give me the cultural history behind it. 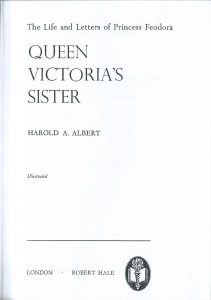 QUEEN VICTORIA’S SISTER by Harold A. Albert (Title page. The book has no dust cover)

The Contessa, as I mentioned, had an extensive section of books on European Royalty, most of whom I’d never heard of – or only vaguely, like Marie of Romania and Princess Daisy of Pless.

However, I did know that Queen Victoria had a half-sister, Anna Feodora Augusta Charlotte Wilhelmine of Hohenlohe-Langenburg, born in 1807, and twelve years older than Victoria. But Feodora, as Victoria called her, is so rarely mentioned that I assumed she’d been married off early and rarely met or corresponded with her half-sister.

Queen Victoria’s Sister by Harold A. Albert came as a complete revelation. Not only did Victoria have a half-sister, she also had a half-brother, Charles, born in 1804. And Victoria and Feodora were always on close terms. ‘Dearest Victoria’…. ‘Dearest Feodora’ letters went back and forth, often weekly, and they met whenever they could. Victoria was distraught when her ‘darling, precious sister’ died in 1872, lamenting that Feodora was the last person to whom she looked up, the last near relative who was her equal, and the last link with her childhood and youth.

So why has she disappeared? Feodora’s letters are kept in the private section of the royal collection to which there is no public access. I don’t think there’s a hidden scandal here, but, Feodora and Victoria wrote to each other without reserve and, doubtless, some areas are still seen as sensitive. Harold Albert’s book is based on a carefully edited transcript of Feodora’s letters, published, with royal approval, for ‘strictly private circulation’ after her death. He has obviously done a lot of further research and made some intelligent guesses based on what he discovered but there are still a number of lacunae. 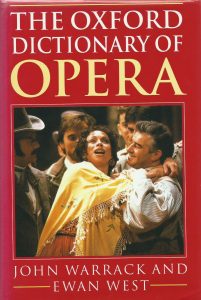 THE OXFORD DICTIONARY OF OPERA

I wanted The Oxford Dictionary of Opera purely for reference. I already have the Oxford dictionaries on Art, English Literature, Children’s Literature, English Language, Ballet, Decorative Arts, and Theatre, and a Book Club Dictionary of Composers. The Oxford Dictionary of Opera fills in a gap. And my various dictionaries are well used. It’s surprising how often I need to check something – and I trust Oxford University Press to be accurate in a way that I don’t trust the internet. 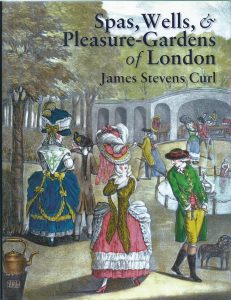 Spas, Wells, & Pleasure-gardens of London by James Stevens Curl has an interesting story behind it. I chose it as a reference book and when I opened it, I discovered that it had been printed by subscription. There is a list of about 240 subscribers at the beginning of the book, which includes the Contessa. I found a card inside from the author thanking her for her ‘loyal support’.

It’s a nicely-presented book, with glossy paper and lots of excellent illustrations. It covers a huge range of London spas, wells and pleasure gardens, many of which I’d never heard of.

From a novelist’s point of view, it was not easy for a Regency lady and gentleman to meet by chance; usually a young lady would be chaperoned and her acquaintances strictly monitored by her Mama. There weren’t that many respectable public places where she could meet a stranger. Church was, of course, ultra respectable, but hardly romantic and, there were only certain times of day a lady could shop – the morning – properly accompanied by a maid. But a group visit to a Pleasure-garden offers a bit more leeway: firework displays, music, circus acts, walks in secluded arbours…. And this excellent book shows you how the system worked. 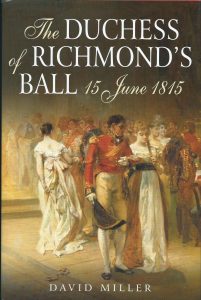 When I saw David Miller’s book on the Contessa’s list I gave a shriek of delight. Looking at its contents, I could see instantly that it contained information I’ve never found anywhere else, for example, a list of exactly who was invited and, even better, who each individual was and something about them. For example, there are British Army guests, with their rank and regiment, plus a column for pertinent remarks: if they were personal friends, or had some other connection.

There is a list of the Richmond family members who attended; guests from the British Embassy staff and a few civilian guests; there were also some foreign military guests from Britain’s various allies: Austria, Prussia, Brunswick etc.

There is another section on what happened subsequently to the guests; some died on the battlefield, of course, but for others, there were unexpected consequences. There is a chapter on Major-General Peregrine Maitland who met Lady Sarah Lennox, one of the Duchess of Richmond’s daughters, possibly at the ball (to which he’d been invited), and, in the October of that year, they eloped. Now there’s a story!

The ball was actually held in the carriage house next to the Richmond residence in the banally named Rue de la Blanchisserie (Laundry Road), and a map shows us the exact location. Miller takes us through what happened that eventful evening.

So, my thanks go to the Contessa and to her family who organized the distribution of the books. I am delighted to have them all and I shall treasure them.

14 thoughts on “The Contessa’s Bequest”