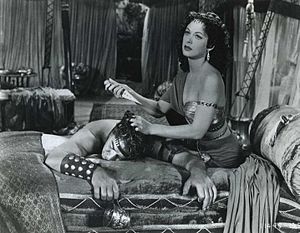 So I thought that today I would look at the story of Samson and Delilah as written in Bible. We are going back to 1200-1000 BC and the action takes place in various towns and cities in what is now Syria. There is a territorial struggle between the Israelites and their deadly enemies, the Philistines. The Philistines’ main god is Baal, a storm and fertility god. The Israelites are monotheistic and worship only Yahweh, the One God. The story of Samson and Delilah takes place when the Philistines are in control and the Israelites’ bitter struggle for freedom dominates the story.

Stele of Baal, the god of storms and fertility. He holds a thunderbolt. Found in the ruins of Ugarit, (Syria). (Courtesy of the Louvre, Paris.)

Our hero is the Israelite Samson, the only child of a woman who had thought she was barren. (She is not given a name.) An angel tells her that she will bear a son who will defeat the Philistines. He was to be a Nazarite, that is, dedicated to the Lord and, as a token, his hair must never be cut.

The two main things the reader learns about Samson is that a) he is stupendously strong – and b) he’s a womanizer. To his parents’ dismay, he insists on marrying a Philistine woman from Timnath and, eventually, his father agrees. So Samson goes to Timnath to court his girl and, on the way, a young lion comes out of a vineyard, growling. Samson kills him with his bare hands, leaves the carcass and goes on his way. On the way back, he stops to see what’s happened to the carcass and discovers a swarm of bees there – and honey – which he takes and eats greedily, though he does leave some for his parents.

By the seventh day, the young men of Timnath are desperate. They go to Samson’s new wife and demand that she either worms the answer out of her husband, or they will burn both her and her father. She does as she is told and pesters Samson so effectively that he gives in and tells her the answer.

So when the time comes, the young men have an answer: What is sweeter than honey? What is stronger then a lion?

Samson is very angry and says, ‘If you had not ploughed with my heifer, you would not have found out my riddle.’  He storms off to Askelon, kills thirty young Philistine men, takes their belts and clothes and gives them to the young men from Timnath. He’s paid what he owes but he is, predictably, furious with his wife. He leaves her and returns to his father’s house. 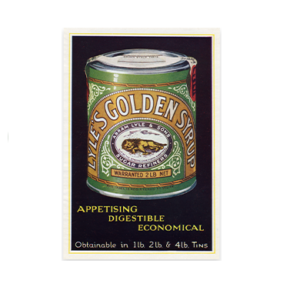 I am sure that you will all recognize this, a Tate and Lyle’s Golden Syrup tin. But have you ever looked at the logo? 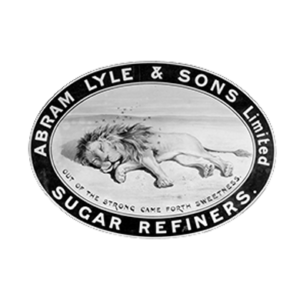 This is the original logo from 1833; it’s a picture of a dead lion with bees buzzing round its mane and the words underneath read: Out of the strong came forth sweetness. Mr Lyle was a man of strong Christian convictions and Tate and Lyle are very proud of their history.

So, next time you go to the supermarket, keep your eyes open for Tate and Lyle’s famous tin with a story to tell.

Back to the story:

Samson’s wife was then given in marriage by her father to the young man who had been Samson’s best man.

It obviously never occurs to Samson that his father-in-law considered his daughter’s marriage to be over. Fast forward to the wheat harvest; Samson’s wrath has died down and he goes to visit his wife, taking with him a kid as a present. He says to his father-in-law, ‘I’m going up to my bridal chamber,’ but his father-in- law won’t let him and says, reasonably enough, ‘ I thought you hated her so I gave her to your best man. Why not have her younger sister instead?’

Samson leaves, vowing vengeance. He catches 300 *jackals, ties their tails together with torches, sets fire to the torches – which, in turn sets fire to the jackals and turns the wretched animals loose, not only in the Philistines’ standing corn but also among the corn sheaves, the vineyards and the olive groves.

In revenge, the citizens of Timnath slaughter and burn Samson’s wife and her father – presumably for bringing Samson into their lives. 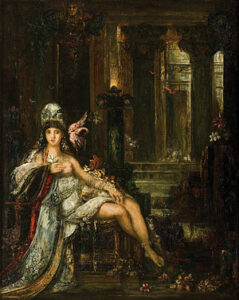 Samson’s next amatory encounter is with a nameless prostitute in Gaza with whom he spends the night. The next morning, he realizes that the Philistines are planning to kill him so he seizes the two massive city gateposts, carries them off and dumps them on top of a hill. The Philistines seek revenge but are defeated when Samson kills 1000 of them with the jawbone of an ass.

Let’s stop at this point and consider Samson as a hero. As far as I can see, he’s done nothing to improve the relationship between Philistines and Israelites. He had the opportunity with his marriage to the Tinmath woman. But when it went wrong with the riddle, he blamed his wife for pestering him so much that he gave away his secret. All he does is go on murderous sprees which only serve to heighten the tensions between Philistines and Israelites.

Furthermore, he appears – as we shall see – to have learnt nothing from the incident. There are no ‘notes to self’ like: must remember that I’m a sucker for women who pester me to tell things I know I shouldn’t.

Lastly, he falls in love with a Philistine woman called Delilah who lives in the Valley of Sorek – a fertile valley which divides the land of the Philistines and the Land of Judah and is famous for its vines. Delilah is the only woman in Samson’s story who is actually named – her name means ‘delicate’. We learn that ‘the lords of the Philistines went up country to see her’. They want her to coax Samson and get him to tell her the secret of his strength. They also make her an offer: ‘We will each give you eleven hundred pieces of silver’. 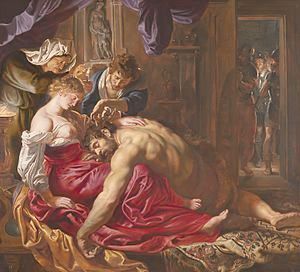 Samson and Delilah by Peter Paul Rubens, courtesy of The National Gallery, London.

I think the above picture is superb. Whatever method Delilah has used to ‘coax’ Samson into telling her his secret, it has plainly exhausted him – and she looks pretty dishevelled herself. The tossed about folds of the drapery indicate a prolonged amorous encounter. Note the servant, delicately leaning over Samson and cutting his hair. In the background, the door is opening and, in a moment, the Philistines will come in and take Samson away.

The Bible story does not tell us much about Delilah herself but scholars have suggested that she may be a high class courtesan – there are no men telling her what to do, for a start; she makes her own decisions. Note that it is Samson who is in love with her – it’s never suggested that she is in love with him. If she is a courtesan, she is obviously a successful one; she certainly sounds like a woman of substance – there is an inner room in her house where she hides the men who will take Samson captive.

What is interesting is that, when she finally has Samson’s secret, ‘the lords of the Philistines came up and brought the money with them.’ There are no attempts to double cross her. And she is not going to do the Philistines’ dirty work for them; instead, Delilah ‘summoned a man and he shaved the seven locks of (Samson’s) hair for her.’ Delilah sounds to me like a wealthy woman with a man servant to do what she tells him, and she is someone the Philistine lords respect. 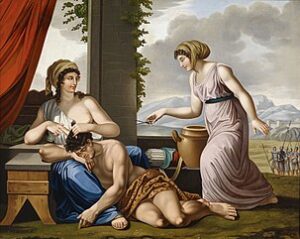 Samson and Delilah by Josef Worlicek, 1844.

The picture above includes some of the elements in the story – Samson asleep in Delilah’s lap, and the approaching Philistines with spears who will capture Samson, but it ignores other aspects. Delilah’s maid is bringing her some scissors and it looks as though Delilah is going to cut Samson’s hair herself, which is not in the original story.

Once the Philistines have Samson, ‘they gouged out his eyes’, and take him down to Gaza where they shackle him with a bronze chain, throw him into prison and set him to work grinding corn. BUT ‘his hair, after it had been shaved, began to grow again.’

Delilah then disappears from the story. But – is she a villainess – or a heroine?

Samson destroying the temple, from an etching in a German Bible 1882. Anon. We can see that Samson’s hair has grown quite long again.

Let’s look at Samson’s situation for a moment. The poet John Milton  (1608-1674) in Samson Agonistes puts his situation very perceptively. He describes Samson as: ‘Eyeless in Gaza, at the mill with slaves.’

Milton himself became blind, and he died only three years after this poem was written, so he could be describing his own experience. I found myself wondering what was worse for Samson, being blind in Gaza, or being forced to grind corn in a mill – something which he’d never had to do in his life and probably found degrading, or having to do it alongside slaves – the lowest of the low.

‘To live a life half dead, a living death’ as Milton puts it.

But this is not quite the end of Samson’s story. The Philistines decide to celebrate their victory over Samson by offering a sacrifice to the god Dagon – the father of Baal – at the important Temple of Baal. All the Philistine lords are there, as well as 3000 men and women on the roof watching the goings-on and where ‘they grew merry’, which means, of course, that they let their guards down. (Whoever originally wrote the Bible account, knew exactly how to raise the dramatic tension.) The audience begin to chant: Our god has delivered our enemy into our hands, the scourge of our land who piled it with our dead. They call for Samson to be brought out of prison and made to fight for their entertainment. Samson has no choice and the resulting ‘fight’ is obviously designed to humiliate the blind prisoner who can’t see where the next blow is coming from. There is a pause and Samson asks the boy who’s led him in, to take him to the two central pillars which support the roof; he wants to rest against them for a few moments. The boy does so.

Samson reaches the pillars. He prays: ‘Remember me, O Lord God, remember me: give me strength only this once, O God, and let me at one stroke be avenged of the Philistines for my two eyes.

He put his arms round the two central pillars which supported the temple. His right arm round one and his left arm round the other, and braced himself and said, ‘Let me die with the Philistines.’ Then Samson leaned forward with all his might, and the temple fell on the lords and on all the people in it. So the dead whom he killed at his death were more than those he had killed in his life.

Samson had quit himself / like Samson, and heroically hath finish’d/ A life heroic.

4 thoughts on “The Story of Samson and Delilah”