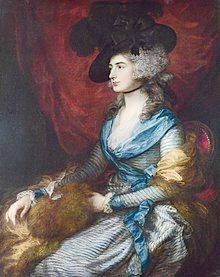 The same forces which propelled the Protestant Reformation forward in the 1530s, and which disapproved of the use of saints’ names for boys, also disapproved of them for girls. Saints’ names like Agnes, Agatha, Helena, Catherine, Cecilia and Barbara were actively discouraged and fell into disuse. Mary and Elizabeth, being Gospel names, were allowed to remain and, as with the boys’ names, parents turned to Old Testament female names for their daughters, for example: Abigail, Deborah, Kezia, Hannah, Leah, Naomi, Rachel, Ruth, Sarah and Rebekah/Rebecca. 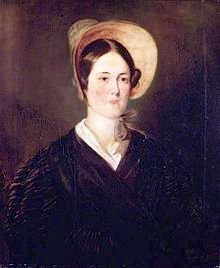 Grace Darling (1815-1842) pastel by Thomas Musgrove Joy. She was a lighthouse keeper’s daughter on the Farne Islands who saved the lives of four men and a women from the wreck of the Forfarshire steamboat in 1838.

Then, because females were known (by the church) to be sinful creatures, a variety of ‘virtue’ names came in, like Clemency, Constance, Faith, Grace, Hope, Verity (truth), Prudence and Patience. Some poor baby girls were saddled with names like Repentance, Obedience, Humiliation, and Sorry-for-Sin. There is even a record of a foundling girl being christened Misericordia Adulterina. For obvious reasons, many of the above names fell out of use pretty quickly. 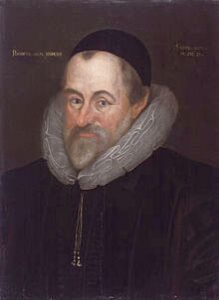 The antiquarian and well-respected historian, William Camden (1551-1623), grew up fully aware of the huge religious changes which had taken place. In 1605, he published Remains Concerning Britain which included a long list of male names he considered to be currently popular and then added: Lest Women, the most kind sex, should conceive unkindness if they were omitted, somewhat of necessity must be said of their names.

Interestingly, we can see at once from Camden’s list of women’s names that many of the old saints’ names had returned because he included Agatha, Agnes, Catherine and Helena; he also added an assortment of Bible names: Mary, Elizabeth, Abigail, Dorcas, Judith, Joanna and Sarah; some of the less objectionable ‘virtue’ names: Faith, Prudence, Grace and Tace (pronounced Tay-cee), which means ‘Be silent.’ Camden agreed with St Paul, who said, ‘Let the women learn in silence, with all subjection’. Camden considered Tace to be ‘a fit name to admonish that sex.’ 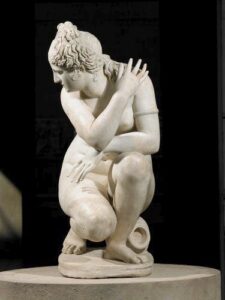 But Camden also included some surprising female names from the Classical World: Cassandra, a tragic Trojan Princess; Diana, the Roman goddess of the moon and hunting; Dido, Queen of Carthage who had a love affair with the Roman hero Aeneas and subsequently killed herself for love; Penelope, the chaste wife of the Greek hero, Ulysses; and Venus, the Roman goddess of love. With the possible exception of Penelope, none of these women were what one might call good role models and few Puritans would have been happy with the names.

However, the good news was that once more, parents were allowed a choice of names and there was quite a variety on offer. There were saints’ names, Bible names, ‘virtue’ names and some literary (and sometimes shocking) names harking back to the Classical world.

The name pool settled down and, by 1700, the top ten girls’ names were: 1 Mary, 2 Elizabeth, 3 Ann(e), 4 Sarah, 5 Jane, 6 Margaret, 7 Susan, 8 Martha, 9 Hannah and 10 Catherine. Of course, the individual girls would probably have answered to various pet names like Polly, Annie, Sally, Peggy, Sue, and Kitty but the girls would have been christened with the full name. 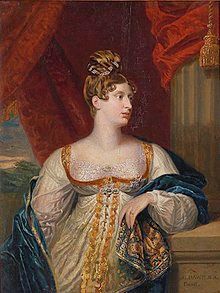 Interestingly, they are almost exactly the same, though in a slightly different order. Catherine was 10th in 1700 but a hundred years later, had dropped to 14. The name which rose spectacularly was Charlotte (back in 1700 it was no 41) and the jump was almost certainly due to the popular Charlotte, Princess of Wales (1796-1817), the ill-fated daughter of George, Prince Regent, later George IV, and his estranged wife, Princess Caroline of Brunswick; Charlotte died in childbirth.

Decima Moore in the popular operetta ‘Dorothy’ in 1892

Annie is now allowed to be a given name – it was not unknown for a vicar to refuse to christen a baby girl by a pet version of the name their parents’ wanted, and instead to christen the baby by what he considered to be the appropriate full name. The name Elsie, a variant of Elizabeth, had been used independently in Scotland since the 18th century. 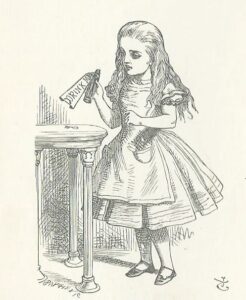 ‘Alice in Wonderland’ by Lewis Carroll, illustrated by John Tenniel

Florence owes its popularity to Florence Nightingale, heroine of the Crimean War, who fought tirelessly for Army reform; and the popularity of Alice is thanks to Lewis Carroll’s Alice in Wonderland which appeared in 1865. Ethel is the name of Charlotte Mary Yonge’s heroine in The Daisy Chain, 1856, a book which almost instantly became a best-seller. The 1886 operetta Dorothy by Alfred Cellier had a staggering run of 931 performances, breaking all box office records and, incidentally, propelling the name Dorothy to the top of the name charts.

So what has happened to the female name pool recently? Let us have a look at the names chosen by parents in England and Wales in 2019. 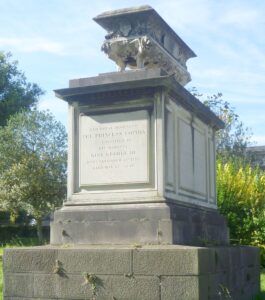 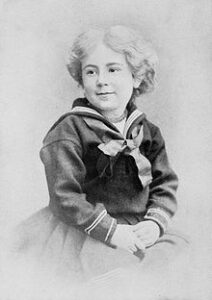 It’s all a bit pick and mix and it’s not easy to categorize. Let’s start with the flower names: Lily, Ivy, Rosie, Poppy and Willow. There is also Lilly at no 86, and Rose at no 55, which confuses matters. Other flower names include: Daisy, Violet, Holly, Jasmine and Iris. Some of these names first came in in the 1890s, like Iris, Ivy and Violet but fell out of favour in the 1920s.

When flower names first came in towards the end of the 19th century, they caused much comment. One English clergyman wrote in 1890: ‘It was my good fortune recently on a railway journey to make the acquaintance of a perfect nosegay of children, all members of one family, and all justifying the sweetness of their names that had been given then – Daisy, May, Lily, Violet and Olive. There had also been a sixth, Pansy, but she, I was informed, had been transplanted to a better and brighter garden than any on earth.’

There was a superstition that it was bad luck to name a child after a flower because flowers were so short-lived. Fortunately, various public health measures regarding the importance of clean drinking water and proper sewerage was followed by a drop in infant mortality and resulted in longer and healthier lives. 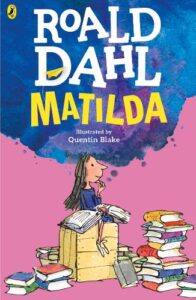 Roald Dahl’s ‘Matilda’, illustrated by Quentin Blake. Could this book be the inspiration for the popularity of the name Matilda?

What we can see here, which is comparatively new, is the use of pet names as full names. For example, Millie was originally a pet name for Amelia or Emily, or earlier, for Mildred or Millicent. Now it is a given name and stands on its own. It’s difficult to judge just how popular a name it is, when there’s already an Amelia at no. 2 and an Emily at no. 11, and an Amelie at no. 80. The same thing applies to Sophia at no. 7; Sophie at no. 23; and Sofia at no. 26. 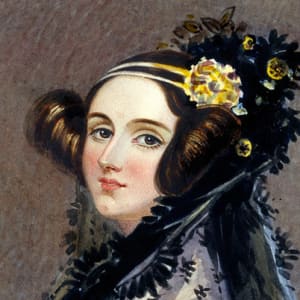 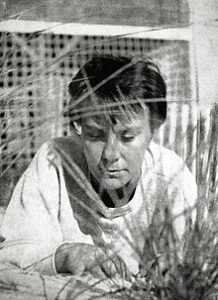 Harper Lee, 1960 photo by Truman Capote for To Kill a Mockingbird. Courtesy of Wikipedia

It’s interesting how many names have a book, film, or TV background. Harper (no. 29) is the name Victoria Beckham chose for her daughter in tribute to the American writer Harper Lee, author of To Kill a Mockingbird (1960). Scarlett (no. 44) first appears as Scarlett O’Hara, the wayward heroine of Gone with the Wind by Margaret Mitchell, published to huge acclaim in 1936 and turned into a spectacular film in 1939. Aria (no 42) is unlikely to come from an operatic aria; it’s probably a variation of Arya, a character in the popular TV series, Game of Thrones. The name Ayla (no. 84) was invented by the novelist, Jean Auel, for the heroine of her ‘Earth’s Children’ Prehistoric Europe series. 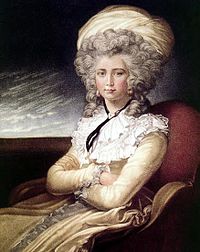 There are yet more names which were originally pet names; Ellie (no 63) which derive from Eleanor (no. 52) or maybe Ellen, Elaine or even Helen. Gracie (no. 74) comes from Grace (no. 8); and Lottie (no. 67) is short for Charlotte (no. 18). Royal names are not forgotten, as well as Charlotte, Beatrice is currently at no 90, and Elizabeth at no 55 – together with two of its variations: Elsie (no. 21) and Eliza (no 38), both very popular from the 18th century onwards but which fell from favour in the early 20th century, only to reappear in the 21st century. The late 20th century popularity of Lisa, also from Elizabeth, not to mention the early 20th century Betty, have also vanished – at least for now. 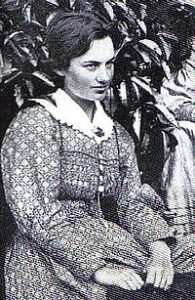 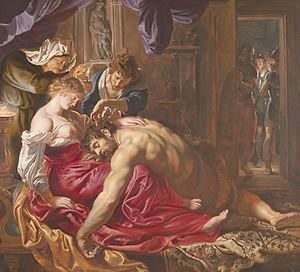 Samson and Delilah by Peter Paul Rubens The National Gallery

While I was writing this, I realized that it felt as if I were trying to do one of those complicated General Knowledge questions; there are names from a great variety of sources but the name pool itself, sadly, lacks cohesion. I suspect that few people nowadays can recognize a Bible name, or the story behind that name: the resentful housewife Martha, or the beautiful but devious Delilah; and I worry that something important has been lost.

But looking at what was once popular also plays a useful part in reminding us what was once everyday knowledge: in the 1890s, for example, everyone knew the operetta Dorothy, just as in the 1960s, everyone knew the songs in The Sound of Music. The popularity, or otherwise, of names can illuminate the zeitgeist of the times: very useful for novelists.

I don’t have an easy conclusion for this post – we are living through topsy-turvy times – and the best I can offer is: we must wait and see.