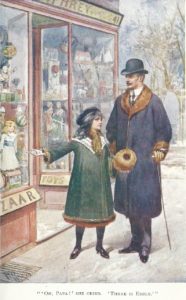 Before he leaves, Mr Crewe buys Sara a beautiful doll, Emily, and has an entire wardrobe made especially for her.

What I’ve always liked about the illustrations is that they are accurate. Harold Piffard, the artist, has obviously read the book carefully. When A Little Princess was published in 1905, it was a contemporary novel; and Mr Crewe looks exactly as a well-bred, wealthy man should do in 1905. He wears a fur-lined patelot coat, with a fox fur collar and cuffs. A bowler hat sits on his head, he twirls a silver-handled cane, and wears a high collar and tie, and fashionable patent-leather shoes with dark grey spats, and he sports a moustache and slight sideburns.

Sara wears an olive green, just below knee-length, winter coat, trimmed with fox fur, and has a fox tippet round her neck. She wears white gloves and what looks like a large beret. Snow lies on the pavement – something Sara, coming from India, would not have met before. 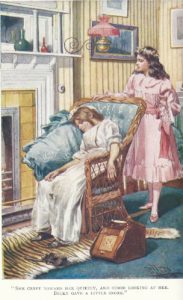 She crept towards her quietly, and stood looking at her. Becky gave a little snore.

In the picture above we notice the tiger skin rug on Sara’s sitting room floor which Frances Hodgson Burnett mentions. The Edwardian coal scuttle and brush are accurate for the period. Sara’s rose-coloured dancing frock, with its row of smocking on the bodice, was all the rage at the time. And the poor down-trodden Becky, the household drudge who has fallen asleep in Sara’s room, thinks that Sara looks just like a princess. As did my ten-year-old self.

One of the things I loved about Sara was ‘her power of telling stories… Sara could not only tell stories, but she loved telling them.’ I understood that. I told an historical adventure serial to the three other little girls in my dormitory at school. My story, The Black Arrow, featured Judith, my beautiful heroine, who fled into the New Forest during the Civil War and lived with a band of outlaws, (as one does) one of whom was their handsome leader, the Black Arrow himself!

I knew what it was like to have my three roommates begging me for more. I had never met anyone else who also told stories, so Sara was a very special person for me. 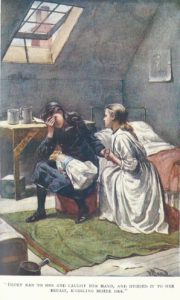 Becky ran to her and caught her hand, and hugged it to her breast, kneeling beside her.

On Sara’s eleventh birthday, everything changed. The diamond mines her father had invested in collapsed, leaving him ruined. Shortly afterwards, he caught a fever and died, leaving Sara penniless and alone. Overnight, Sara stopped being the school’s star pupil and became a household drudge, like Becky. She now slept in the attic room next to Becky’s and was at everyone’s back and call. Piffard shows us the room Hodgson describes with its slanting roof, dingy peeling whitewash, and a hard old iron bedstead with a faded coverlet. Through the skylight, all Sara could see was a dull grey sky.

As a child, I always cried at this bit. I felt Sara’s pain and fear; what would become of her, if she were turned out of doors?

Sara survives by telling herself stories. She pretends that she is a princess who has met with adversity. Usually, she’s in the Bastille and has only rats for company. ’Sometimes I try to pretend it’s another kind of place but the Bastille is generally easiest – particularly when it’s cold.’ There is a practical side to Sara’s fantasy life, and I appreciated that.

When I was eleven, I was sent to a horrible secondary boarding school and quickly discovered that I needed all the fantasy life I could get, just to survive. I wrote four novels during that time – all historical, ranging from Ancient Rome, 14th century Wales, a time slip novel set in Medieval times (inspired by Ronald Welch. and a stirring tale set in early 19th century Cornwall – think Georgette Heyer meets Daphne du Maurier.

I knew just how Sara felt. 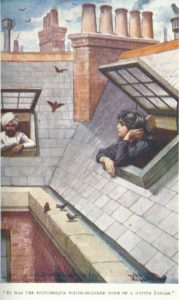 Sara meets Ram Dass, the Indian man-servant of the gentleman from India

In the picture above, Sara meets Ram Dass, who has come from India with his master, the ill Mr Carmichael. Sara and Ram Sass are both staring out of their respective attic room windows, and Sara’s first thought was that ‘his face looked sorrowful and homesick. She felt absolutely sure that he had come up to look at the sun, because he has so seldom seen it in England that he longed for a sight of it.’

I loved Sara’s capacity for empathy. ‘She looked at him interestedly for a second, and then smiled across the slates. She had learned how comforting a smile, even from a stranger, may be.’ And Ram Dass smiles back.

Ram Dass is holding a small monkey which escapes and darts into Sara’s room: Sara, who spent her first seven years in India speaks to him in his own language. ‘Will he let me catch him?’ she asked.

He crosses over to her attic room and eventually catches the monkey.  After many salaams, Ram Dass returns to his own room. His visit brings back a rush of memories for Sara of her childhood in India. There, she was petted, not only my her father, but by all the servants, too. She was the ‘Missee Sahib.’ It was a very different world, she now realizes, and it has gone for ever. The past is indeed another country. What I took from it, age ten, was the mutual respect and friendliness between Ram Dass and Sara. 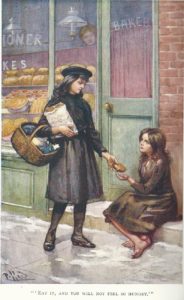 ‘Eat it, and you will not feel so hungry.’

For me, A Little Princess was a sort of guide to life. Sara was empathetic – a virtue which, as a child, I scarcely recognized. Sara taught me to put myself inside the head of those around me. I could put myself into a fictional person’s head easily, but not into the head of the mean girl who sat behind me in class. Sara is always thinking about people, trying to work out what makes them tick – even the snobbish, sneaky Lavinia, who enjoys getting her into trouble.

In the picture above, Sara is at a very low point. She had been out for hours, tramping the wintry streets in shoes that leak and she is feeling faint and really hungry. Miraculously, she finds a four-penny piece in the gutter. Then, on the doorstep of a baker’s shop she sees a beggar girl, in ‘wet and dirty rags … a shock head of tangled hair, and a dirty face with big, hollow, hungry eyes.’ Sara finds herself thinking that princesses ‘always shared – with the populace – if they met someone poorer and hungrier than themselves. They always shared.’

She goes into the shop to buy four penny buns. The kindly shop-woman gives her six buns, and Sara gives five of them to the beggar girl.

Actually, even at ten, I was somewhat sceptical about princesses always sharing, but, all the same, I approved of the sentiment. 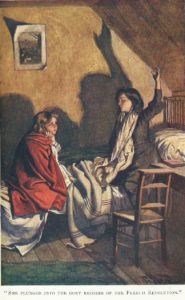 ‘She plunged into the gory records of the French Revolution.’

I loved this picture; there is something about the shadow of Sara’s upstretched arm which thrilled me. It echoed the drama of the stories of Robespierre and the Princesse de Lamballe that Sara is telling Ermengarde, one of Miss Mitchin’s pupils, a kind but rather thick child who is, unfortunately for her, the daughter of a very learned professor.

Sara and I were both book worms. But, whilst Sara was reading Carlyle’s History of the French Revolution, I was merely devouring Baroness Orczy’s stories of the Scarlet Pimpernel. All the same, I still learned about Robespierre and the ill-fated Princess de Lamballe.

Piffard, I noted, didn’t forget what the attic room looks like. The bed is the same, as is the old-fashioned chair with the rush seating, and the same bit of old carpet on the wooden floorboards. Ermengarde is sitting snuggled up in her red shawl on Sara’s bed.

Later, Ermengarde brings up a hamper sent by her aunt, and she, Sara and Becky, pretend that it’s a feast. But they have scarcely begun to eat when Miss Mitchin flings open Sara’s bedroom door, and sends Ermengarde scurrying downstairs in tears. Becky is banished to her attic in disgrace, and Sara, as obvious ringleader, is told that she will have no food the following day.

It’s been an awful day and, exhausted, Sara falls asleep; and while she’s asleep something truly magical happens. When she wakes up a couple of hours later, she finds her room transformed. There is a fire glowing in the grate, a small folding table with an array of delicious things to eat, a teapot and a hissing kettle, warm rugs on the floor, and warm coverings on the bed.

She calls Becky and, together, they tuck in. Sara shares her new blankets with Becky and both girls enjoy a comfortable night with full stomachs, for once.

This episode is, of course, in Fantasy Land. I knew that in real life this sort of thing didn’t happen, but imagining that it might was a real comfort.

‘Perhaps kind thoughts reach people somehow, even through windows and doors and walls,’ Sara thinks as she passes the gentleman from India’s front door. And perhaps they do. Certainly, ‘she would go away, feeling quite comforted and a little warmer herself.’ 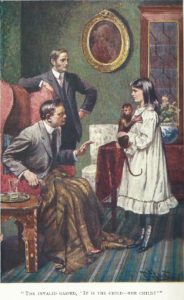 The invalid gasped, ‘It is the child – the child!’

Of course, everything works out. Ram Dass’s master, the invalid Mr Carmichael, turns out to be her father’s close friend and business partner, and he has been looking for Sara for two years. Miss Mitchin gets her comeuppance, Becky becomes Sara’s maid and Sara finds a home where she is loved and wanted.

I was lucky that my copy of A Little Princess had Harold Piffard’s original illustrations which were, presumably,  approved by Frances Hodgson Burnett (1849-1924) herself. The book, published by Frederick Warne and Co, had been in print for at least 50 years – and it still is in print: hardback, paperback, audio book and on Kindle, firm evidence that it has enthralled and comforted little girls for well over a hundred years.