Re-reading Emma recently, it struck me that, far more than Jane Austen’s other novels, it is permeated by a sort of unease about class. On the surface, it’s a socially stable society with the Woodhouses at Hartfield and Mr Knightley at Donwell Abbey at the apex. Their wealth and status has obviously been established for many generations – that socially damning word ‘trade’ is no part of their financial inheritance. It is the heroine, Emma Woodhouse, who is the most conscious of social class and she believes that she knows to a T where everyone fits into the class structure. It is Emma who is the most unforgiving about people wanting to climb above their ‘proper’  – as she sees it – place.

The third member of the top tier in Highbury is the Reverend Philip Elton. A Church of England clergyman was, by definition at that period, always a gentleman; he would have been at university at Oxford or Cambridge and probably acquired his living through some family connection. He is a single man, on the look-out for a rich wife, and is always welcome at Hartfield.

Mr Weston, who lives at Randalls, ‘a man of unexceptionable character, easy fortune, suitable age, and pleasant manners’ is also allowed to be in the top tier but with a small proviso. As a young man, he married an heiress, a Miss Churchill, whose family thought him beneath their daughter and promptly disinherited her. Miss Churchill loved her husband but she missed the luxuries of her former home and, as a result, she and Mr Weston lived beyond their means. When she died, three years later, Mr Weston was a poorer man. 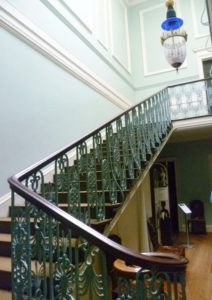 He did that risky thing for a gentleman, he ‘engaged in trade’ repaired his fortune and acquired ‘a little estate adjoining Highbury’. The fact that he repaired his fortune by trade in London needed to be quietly ‘forgotten’. With both land and a repaired fortune, Mr Weston can re-assume his gentlemanly status, follow his heart and marry Miss Taylor, once Emma’s governess and now her beloved companion.

Miss Taylor is an accomplished and well-educated lady by birth, but she is portionless – that is, she has no money of her own. A governess was one of the very few jobs a lady could do without losing status. But if Miss Taylor lost her job at Hartfield, she would be left facing a financially uncertain future. Mr Knightley sees this at once: (Emma) ‘knows how much the marriage is to Miss Taylor’s advantage; she knows how very acceptable it must be at Miss Taylor’s time of life to be settled in a home of her own, and how important to her to be secure of a comfortable provision.’ 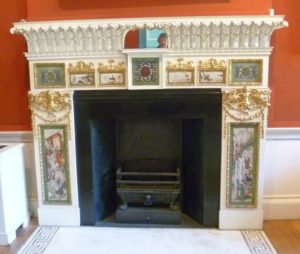 The second tier in the status stakes comprises Mrs and Miss Bates, the wife and daughter of a former vicar of Highbury. Their income is pitifully small but, as the wife and daughter of a clergyman, they have the necessary social status which means that their company will always be acceptable. For old Mr Woodhouse, an evening supper and card party with the Bateses and Mrs Goddard, headmistress of the Highbury girls’ boarding school, all thoroughly acceptable guests, are exactly what he likes. And they are very happy to ‘win or lose a few sixpences by his fireside.’

Such is the situation in the first couple of chapters but what follows shows the readers just how tension-filled this supposedly settled status can be. ‘Emma’ was first published in 1816, the year after the Napoleonic Wars ended. Twenty years earlier Britain had been a largely agricultural country, but, during the war years, the country had undergone massive changes in industry, transport, finance and banking, and trade. New opportunities meant that new men with new skills had made their fortunes, come up in the world, and were looking for their place in the sun.  The old class rigidities would have to change.

We see this echoed in Emma. We are back  at Hartfield and Mrs Goddard has a request: 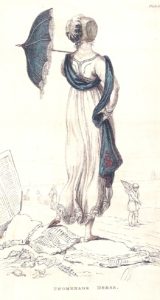 Mrs Goddard begs to be allowed to bring the illegitimate but beautiful, 17-year-old Harriet Smith, a parlour boarder at her school, to one of the Hartfield’s evening parties. Emma consents, and is delighted with Harriet. She finds her very engaging, ‘showing so proper and becoming a deference, seeming so pleasantly grateful for being admitted to Hartfield, and so artlessly impressed by the appearance of everything in so superior style to what she had been used to, that she must have good sense and deserve encouragement.’

Emma cannot help thinking that such a beautiful girl must surely have noble blood; or a wealthy father who will dower her handsomely to cover the stigma of her illegitimacy. She casts around for a likely husband and decides that the handsome bachelor, Mr Elton, would be the ideal husband for her new friend. 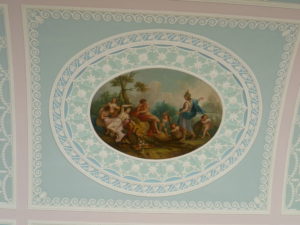 It certainly seems as if Emma is happy to bend the rules in Harriet’s case with regard to who is a lady and who isn’t. Anyway, if Harriet married Mr Elton, she would acquire the status of a lady by marriage.

She is determined that Harriet shall not marry the clownish, ungentlemanly tenant farmer, Robert Martin, as she sees him. Harriet, she thinks, can do better for herself.  Mr Knightley, however, feels very differently about Robert Martin, ‘I never hear better sense from anyone than Robert Martin. He always speaks to the purpose; open, straightforward, and very well judging.’ 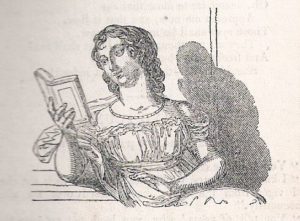 What is interesting is that Mr Knightley judges differently from Emma. He is concerned with Robert Martin’s character, not his social status. Emma, we begin to realize, doesn’t yet have the emotional maturity to do that. For her, social status is everything.

Take the Coles – who are rising in society, to Emma’s great displeasure. They are ‘very good sort of people, friendly, liberal, and unpretending; but, on the other hand, they were of low origin, in trade, and only moderately genteel.’ During the last two years their fortunes have increased rapidly; they have extended their house, built a new, bigger dining-room, increased the number of servants, and soon, their style of living was second only to Hartfield! 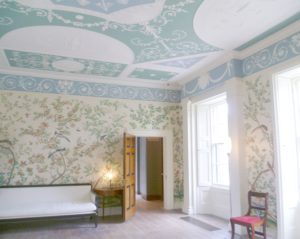 Then they actually had the effrontery to start giving dinner-parties, but, surely, ‘the regular and best families Emma could hardly suppose they would presume to invite, – neither Donwell, nor Hartfield, nor Randalls.’

Emma’s thoughts continue: ‘The Coles were very respectable in their way, but they ought to be taught that it was not for them to arrange the terms on which the superior families would visit them.’ (Ouch!) If they dared to invite her and her father to dinner, she would take great pleasure in declining and making her displeasure clear.

Soon Emma learns that, although Mr Knightley at Donwell, and the Westons at Randalls have received invitations – and accepted them – no invitation has been sent to Hartfield. She is thoroughly aggrieved at not being able to refuse the non-existent invitation – and I cannot help thinking that Jane Austen must have enjoyed the irony.

When the Hartfield invitation eventually arrives, the Coles expressed themselves properly, with much consideration for her father. ‘They had been awaiting the arrival of a folding screen from London, which they hoped might keep Mr Woodhouse from any draught of air, and therefore induce him the more readily to give them the honour of his company.’ 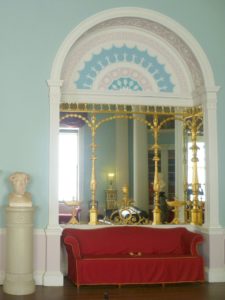 Emma allows herself to be persuaded and accepts the invitation; the Coles move up to the top rung with no more protests from her. What is interesting about the whole episode that she never thinks, I’ve been such an ass about this class business.

Maybe accepting the Coles as social equals is easier for men than for women. The gentlemen in the village meet each other all the time as fellow magistrates, to discuss points of mutual interest at The Crown, or to co-operate as landowners. In fact, it is unlikely that Mr Cole would have gone ahead with his dinner party unless it had been discussed informally beforehand with Mr Knightley, Mr Weston and Mr Elton, to test the water, as it were. 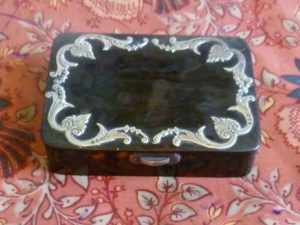 Emma, being female, has no access to this male network; her duty is to visit the poor and to pay social calls on the Bateses; she doesn’t actually have much power in the village – a fact she doesn’t seem to realize. In fact, she doesn’t really have much power at all; Mr Woodhouse may look feeble but it is his whims and fancies that rule Hartfield. Maybe Emma’s unease about people’s social position – and her manipulation of Harriet – is really about her own frustration at living such a narrow life.

Then there is the case of Jane Fairfax. Jane is in a curious position with regard to her status. She is the orphaned only child of Miss Jane Bates and Captain Fairfax and the granddaughter of Mrs Bates. Colonel Campbell, her father’s friend, offered her a home when she was small and she has grown up with his family and received all the advantages of a good education and a cultured environment. She is well-bred, elegant, beautiful and musically talented. By birth, her status is on the lower rung with her grandmother and aunt, by education and upbringing her status is equal to Emma’s own. 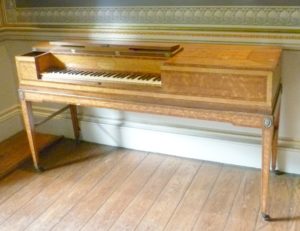 If she marries Frank Churchill against the wishes of his aunt, Mrs Churchill, Jane’s status, and Frank’s, will drop dramatically. Neither of them have any money of their own. Jane will have to accept Mrs Smallridge’s offer of a post as governess to her children. As for Frank, it’s difficult to see him taking a leaf out of his father’s book, finding a suitable business opening in London, and making his own fortune. In Jane and Frank’s case, social acceptability – and access to the Churchill fortune – is crucial.

The last person I want to look at is Mrs Elton, neé Augusta Hawkins. Emma, still thinking in status terms, finds little to impress her with the new Mrs Elton: ‘She was good enough for Mr Elton, no doubt; accomplished enough for Highbury – handsome enough – to look plain, probably, by Harriet’s side…’ But she ends, damningly, ‘She brought no name, no blood, no alliance.’ 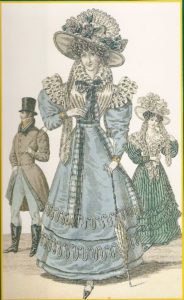 Mrs Elton, however, believes otherwise. She is convinced that her arrival will do much to raise the tone of Highbury. ‘I think, Miss Woodhouse, you and I must establish a musical club, and have regular meetings at your house or ours.’ Emma is outraged at her effrontery.

She is further outraged by Mrs Elton’s over-familiarity in referring to Mr Knightley as ‘Knightley’. Mr Elton has apparently told her that he and ‘Knightley’ are particular friends. ‘I must do my caro sposo the justice to say that he need not be ashamed of his friend. Knightley is quite the gentleman; I like him very much.’

However, Mrs Elton does provide the readers with something to laugh at. Here is Mrs Elton: ‘I have quite a horror of upstarts. Maple Grove has given me a through disgust of people of that sort…. (in particular the Tupmans.) ‘They came from Birmingham, which is not a place to promise much, you know, Mr Weston. One has not great hopes from Birmingham. I always say that there is something direful in the sound.’

When I started thinking about this post, the social unease in Emma seemed to be all-pervasive; gradually, however, I changed my mind. Mr Knightley, for example, feels no anxiety at all about admitting the Coles as proper people to dine with; Mr Weston is delighted to acquire Jane Fairfax as a daughter-in-law, and he marries the ex-governess, Miss Taylor, without a qualm. The handsome Mr Elton, who is welcomed everywhere, is perfectly satisfied with his new wife – she has a dowry of £10,000, after all.

I decided that my theory that Emma feels so strongly about class is because she has so little, of any real value, to do in her life, is probably right.