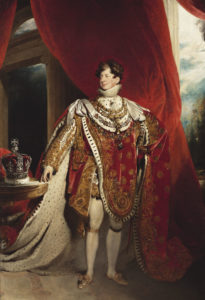 On the plus side, George was intelligent and had a great deal of personal charm – when he chose to use it. He was also a serious connoisseur of the arts and the magnificence of the Royal Collection owes a lot to his acquisitions – stupendously expensive though some of them were.

His tastes were varied and ranged from Dutch paintings, like Cuyp’s lively Passage Boat shown above, to Rembrandt’s The Shipbuilder and his Wife, a sober, middle aged couple of the merchant-class caught at a moment in their busy lives, shown below, a painting which is full of humanity. George IV bought only the best and, at 5000 guineas, the Rembrandt was the most expensive painting he had ever bought. And its purchase drove him deeper into debt – not that he worried too much about that.

When Prince of Wales, he had taken advantage of the recent French Revolution to buy some of the numerous works of art, once belonging to either the French royal family, or to fleeing French aristocrats, which were now floodinng the market.

He acquired the most expensive Sèvres porcelain dinner service ever made – commissioned by Louis XVI in 1783 but not completed until 1792. It was delivered to George in batches over the next 23 years – probably a wise precaution, considering how tardy he could be about paying. It is used today at royal banquets. 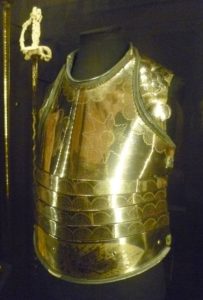 But George’s taste was eclectic to say the least, he also had a passion for arms and armour, for example, the specially-commissioned breastplate above, made of steel, velvet and silk – you can see that the edges, like round the neck, are padded for comfort. Looking at it, I found myself thinking that it might have fitted a trim-ish Prince Regent in 1806, but I doubted that it would still fit in 1820, when he finally became king.

He was a reading man, too, and I was thrilled to see the three volumes of Jane Austen’s Emma which Jane Austen mentioned in December 1815, when writing to James Stanier Clarke, chaplain to the Prince Regent, to fulfil her promise of sending His Royal Highness a special copy three days in advance of its publication. The Prince of Wales had copies of all of Jane Austen’s novels in each of his palaces. And we know that the Prince Regent’s daughter, Princess Charlotte, was also a fan, for we have her comments on Sense and Sensibility.

This coronet is one of my favourite items; it is set with 1,333 diamonds and includes a four-carat pale yellow brilliant. The Queen wears it to and from the State opening of Parliament. It is an elegant piece and doesn’t shout that was it a stupendously expensive – especially compared with the ostentation of some of the other objects in the exhibition.

This picture was one of George IV’s favourite pictures and he kept it at Windsor Castle.

The curators of the exhibition have had the brilliant idea of transforming each of the three main galleries into rooms that George himself might have arranged. They contain only furniture, pictures, vases and other ornaments which he himself collected and which once graced his own palaces: Carlton House, Brighton Pavilion, Buckingham Palace, and Windsor Castle. The general effect is like walking into a treasure house where everything sparkles or shimmers with gold. Approve or not – and I do not forget that George IV seems to have cared very little how his subjects fared. The years after Waterloo were exceptionally hard; the Corn Laws, which banned the import of foreign grain until the home price had reached 80 shillings a quarter – which priced it out of the reach of the poor and caused huge hardship, appears to have concerned him very little. 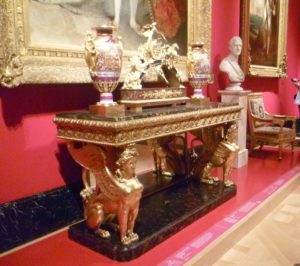 A corner of the Red Gallery. Photo by Elizabeth Hawksley

However, I must admit that the exuberance and brilliance of the rooms in the Queen’s Gallery à la George IV is, perhaps guiltily, very cheering. It’s like being given a large selection of ice cream scoops in all your favourite flavours together with dollops of chocolate, whipped cream, chopped hazelnuts – and maple syrup all over it; you are pretty sure that it’s not good for you; you can see that it’s way over the top; but, all the same, you can’t resist it and it’s delicious. 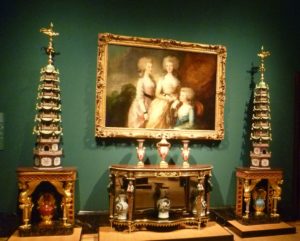 Pagodas and other pieces of Chinoiserie in the Green Gallery. Photo by Elizabeth Hawksley

But I was also about to be treated to an interesting lesson in art decoration. The first thing which caught my eye as I walked into the exhibition was two pagodas, five richly ornamented vases, three gilded tables and the portrait of the three princesses, all against a wall. I found them all rather overwhelming and my eye didn’t know what to look at first. Eventually I settled on one of the pagodas. The signage told me that the pagoda came from Jingdezhen Province in China and dated to 1807. Mounts by Benjamin Lewis Vuilliamy were added 1815-25. The two pagodas were originally bought for Brighton Pavilion.

Unfortunately, I hadn’t a clue what ‘mounts’, in this context, meant. PIainly, it didn’t mean a mountain – like Mount Etna; and it wasn’t a horse, as in, ‘The knight’s leapt on his mount and galloped off.’ I knew that the card surround which comes between a painting and the frame was also called a mount. But what and where were the mounts that Benjamin Vuilliamy added? I couldn’t see any. But then, I wasn’t sure what I should be looking for.

(The surcoat was part of George’s coronation robes and specially commissioned for his coronation.)

Fortunately, the members of staff standing in each room aren’t there just to make sure that no-one touches anything – though, doubtless, they keep an eye out for that as well – they are fully qualified to talk on the objects displayed. I found myself talking to two of them, and they obviously knew their stuff. I’ve called them Minerva, after the Roman goddess of wisdom, and Mercury, the messenger god, to protect their privacy, and to commend their erudition. I indicated the pagoda that was puzzling me and we all walked over to examine it. Where, I wanted to know, were the mounts? 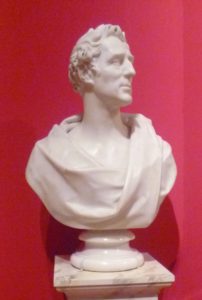 Marble bust of the Duke of Wellington, one of George IV’s heroes by Sir Francis Chantrey. Photo by Elizabeth Hawksley

Minerva told me that ‘mounts’ referred to all the bits added afterwards. Like what? I asked, sceptically. The pagoda had a tall finial in the shape of an arrow with a snake winding down it, a flying dragon at the top, and an upturned gourd-shaped bowl at the base with bells hanging from it. It was quite elaborate enough as it was, I thought. 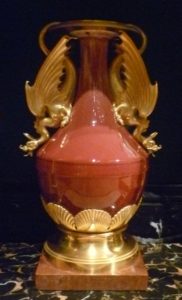 Red vase under the table which supported the pagoda: plenty of mounts in evidence here

Mercury explained that it was fashionable during the Regency to add extra bits to art objects to make them even more arty – like the finial. Minerva pointed to the Chinese vases under the two small tables supporting the pagodas. Originally, they would have been plain, she said. The Chinese themselves did not go in for over ornamentation.

(George enjoyed playing the English country gentleman; but he still chose a first rate artist to paint him and his horse.)

Mercury pointed to the red vase and explained that what the Prince Regent wanted to do was to make the art object even more Chinese than it was already. I was staggered. I’d always believed that the gold rims at the top of a vase, the gold stands at the base, not to mention the two elaborate gold dragons acting as handles on each side, were part of the original. This, surely, was what Chinese vases were really like.

But I was wrong. Mounts were far more than pieces of card between the picture frame and the picture, they were far more elaborate and needed specialist craftsmen to create then. What mounts were, in fact, were decorative bits of ornamentation, usually in gilt, gold, or silver-gilt, which transformed the original object into something else entirely. The finial at the top of the pagoda was a total fabrication. I was rather shocked. It felt as though I’d been deliberately deceived.

I thanked Mercury and Minerva for sharing their expertise and for their time, and set off to look at the objects in the exhibition with newly-opened eyes. Suddenly, I saw ‘mounts’ everywhere. Nikolaus Schmidt’s astounding Nautilus cup pictured above was, perhaps, the supreme example.

Schmidt was a master goldsmith who often embellished natural rarities, such as the highly prized nautilus shell. The rough surface of the natural shell has been carefully removed to reveal the mother of pearl beneath. The cage which holds the shell depicts Neptune, mermaids and a hippocamp – a sea-horse. The workmanship is wonderful and the object itself is beautiful but, alas, useless. You couldn’t possibly drink from it. But perhaps that is the point. 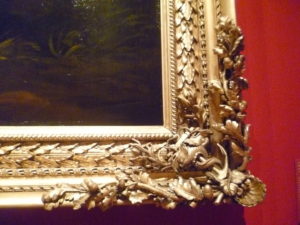 The mount of carved oak leaves and acorns  decorating the corner of the picture frame, symbolizes power and victory. Photo by Elizabeth Hawksley

I even found a mount on a mount on one corner of the frame of the portrait of Lord Nelson: a wood carving of a spray of oak leaves and acorns.  Obviously, it was there to emphasize, not only Nelson’s valour, but also his stupendous victory at Trafalgar which enabled Britain to claim that Britannia Ruled the Waves, though at the cost of Nelson’s own life.

George IV, Art & Spectacle is on at the Queen’s Gallery, Buckingham Palace, until 3 May, 2020. It is well worth seeing and, not only did I enjoy it, I learned a lot.