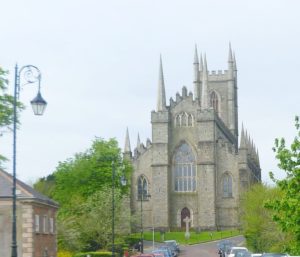 Re-united with his family, Patrick studied, became an ordained bishop and returned to Ireland as a bishop; his mission – to convert the heathen Irish to Christianity. Much of what we ‘know’ about St Patrick was carefully edited and rewritten centuries later by men with various axes to grind. We are left with a choice of St Patricks: the miracle-maker who banished all the snakes in Ireland; the maverick converter of pagans – resented by the official church in southern Ireland; a saint who converted the whole of Ulster – a claim more likely to have been conflated from the work of many travelling priests over several generations. The Annals of Ulster state that he died either in AD 461 or AD 493 which is quite a gap. Take your pick. 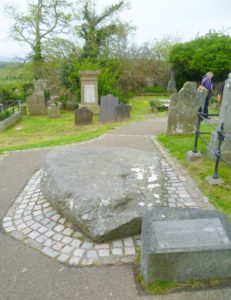 The granite grave slab inscribed ‘Patrick’ actually dates from 1900. It covers the spot of his original burial. The cathedral is just to the right.

According to a 7th century life of St Patrick written by the monk Muirchu, Patrick was buried in the graveyard of Downpatrick Cathedral.  In the 12th century, Downpatrick was also claimed as the final resting place of St Brigid and St Columba – these last two are quite untrue: Brigid is buried in her monastery in Co Kildare, and St Columba is buried on the Scottish island of Iona. Say something often enough and it can turn into ‘fact’; alternative truths are nothing new. 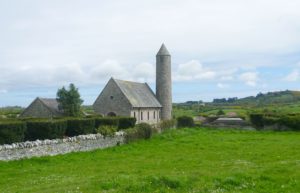 The small church at Saul with a typical round tower.

St Patrick’s first church was set up in an old barn at Saul (the Irish word sabhall means barn.) The round tower is frequently associated with churches in Ireland. In Irish, they are called cloigtheach which means a bell tower, so bell-ringing was obviously one of their functions. Their height, too, (up to 40 m.) makes them very visible as beacons to the Faithful; and their thick walls and the difficulty of entering without a ladder means that they could be used to keep precious relics, books or other treasures safe.

The church in the photograph above was built in 1933 to commemorate St Patrick’s arrival in AD 432 but it was built on the footprint of the original barn. 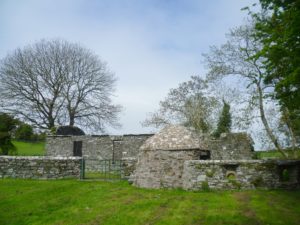 The site of Struell Wells, about a couple of miles from Saul, is extremely interesting. The whole complex: the Holy Drinking Well and the Eye Well, the men’s and women’s bathhouses, the chapel, and the site of a holy thorn tree, all suggest that Struell Wells was an important sacred site well before Christianity came to Ireland. 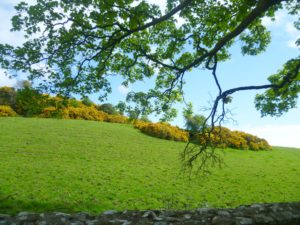 Struell Wells: view of the encircling hillside with gorse

The place itself looks like a sacred site, set between two rocky outcrops which, at the time of my visit in May, was topped with bright yellow gorse. There are many sacred sites in Ireland. For example, the spectacular sacred landscape around Carrowmore in Co. Sligo with its passage tombs, megaliths, stone circles, and chambered cairns dating back to 5000 BC and before amply demonstrates how ancient the tradition is. But back to Struell Wells. 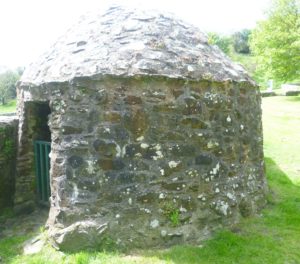 At Struell Wells, the Drinking Well, which lies in one corner of the large field which contains all the holy buildings, is circular with a stone slabbed roof. This is the only well fed by spring water. I tried the water in the Drinking Well. It tasted much nicer than the bottled water I had with me so I emptied my bottle and refilled it. The Eye Well water and the water serving the two Bath Houses are fed from the stream nearby. There’s a complex underground draining system with stone-covered culverts and pipes. 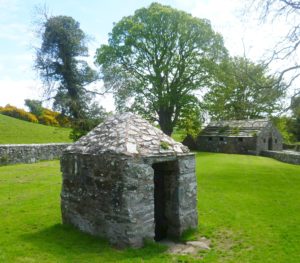 The Eye Well is a healing well where the pilgrim would have gone through healing rituals and recited the appropriate prayers. You can see the men’s bathhouse in the background. 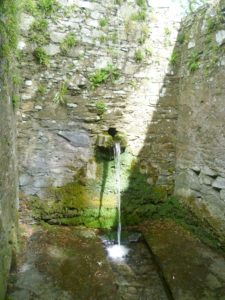 Looking inside the remains of the women’s bathhouse

The women’s bathhouse is damp, chilly and roofless but at least the water looks clean and clear. There were originally wooden cupboards to hold the women’s clothes as the ceremony required them to be naked. A description dating from 1515 tells us what went on: The (female) pilgrims enter the women’s bathhouse and say a ‘Pater Noster’ and an ‘Ave Maria’ as well as a prayer to St Patrick. They remained there on their knees with the water falling all the time on them; and this, they say, was done by St Patrick.

The men’s bathhouse is at least twice the size of the women’s and roofed. There are benches to sit on. The whole building was probably originally an earlier chapel dedicated to St Patrick, and the stream there ran down the centre of the nave and disappeared under the altar. However, when I visited, it was so dark I couldn’t photograph it at all.

The site was first mentioned in an 8th century hymn as having been visited by St Patrick, and later references mention the wells’ healing powers. Struell Wells’ Midsummer bathing rituals were an integral part of the pilgrimage experience there and that everyone bathed in the nude. At its height, about 1000 people came for the Midsummer pilgrimage and the traditional ritual entailed walking round all of the penitential cairns  – or, if your sins were too heavy, you might crawl round or carry a heavy stone on your back. Perhaps things got out of hand because, when the pilgrimage was finally banned in 1870, it was because of ‘riotous behaviour’. Pity – it sounded fun, providing that you weren’t burdened by too much sin.

Ireland has many sacred places and a map of the area around Downpatrick between Dundrum Bay and Strangford Lough shows how many abbeys, holy wells, round towers and small chapels there are. 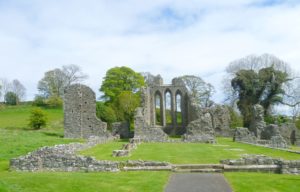 Inch Abbey, for example, is sited only a few miles away, as the crow flies from Downpatrick. It’s a very attractive abbey with its tall Gothic lancet windows and its setting is wonderful. 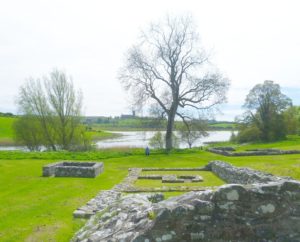 Inch Abbey’s view across Strangford Lough – note the silhouette of Downpatrick Cathedral in the distance.

If you look towards Strangford Lough, you can just see the silhouette of Downpatrick Cathedral on the horizon across the water. Abbeys, churches and chapels built round the Lough would have been able to hear each others’ bells ringing.

The last place I want to look at is Nendrum monastery built on an island which juts out into Strangford Lough. It’s a 5th century monastic site and it was traditionally founded by St Mo-Choi, who was a disciple of St Patrick himself. (Mo seems to be a common prefix for Irish saints at this period – but I can find no explanation of what it signifies.) 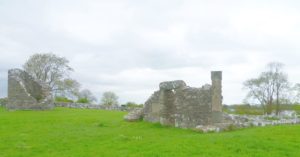 Nendrum Monastery: the stump of a round tower is on the left and the walls of a section of the monastery is on the right, you can just see the sundial slab

The story goes that St Patrick gave Mo-Choi a crozier, a bishop’s pastoral crook, to symbolize his shepherding of his flock, and, in return, Mo-Choi pledged to give St Patrick a pig every year. Nendrum comprised three concentric enclosing walls, the holiest enclosure being the central one which held the church, the tall tower and the monks’ graveyard. 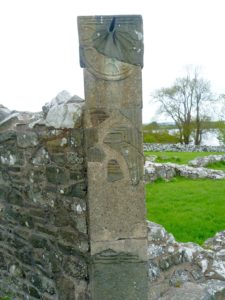 The photo is a close-up of the sundial pictured above. It shows 5 main rays which mark the times of the dawn, dusk, noon, the mid-morning and the mid-afternoon prayers

The middle enclosure contained the monks’ living quarters and various buildings which have been interpreted as workshops or a school. 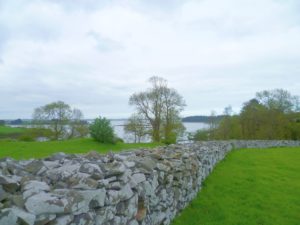 An outer dry-stone wall leads down to Strangford Lough. A rare tidal mill has recently been discovered there.

Dendrochronology dates the tidal mill at Nendrum to about 619 AD, which makes it the earliest example of a horizontal-wheeled mill in Western Europe. This remote spot in Ireland might seem like the back of beyond, but, in the 6th and 7th centuries, it was at the centre of new technology, new ideas, and the spread of a new religion. It reminds us how important boats were for getting people and goods around. It was faster and more efficient to go somewhere by boat than by any other means of transport. Strangford Lough is a sea lough which goes out to the Irish Sea – and, from there, to the rest of Europe. It brought St Patrick to this part of Ireland – he traditionally landed only a few miles away. 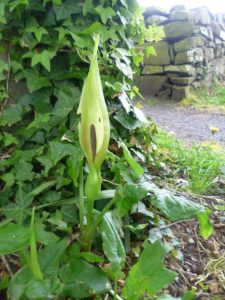 Nendrum has a lovely atmosphere – very peaceful and I enjoyed the flowers, too.

4 thoughts on “In the Footsteps of St Patrick”