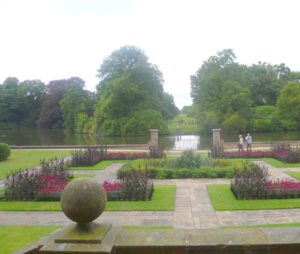 Behind the house and beyond the ordered flower garden and the walled kitchen garden, the owner often had a carefully controlled wildness. This, after all, was the Age of Sensibility, the Romantic Age, you needed a space where you could, metaphorically speaking, loosen your corsets. 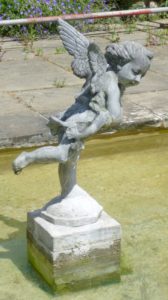 Cupid in the pond; Love in the shrubbery?

In Jane Austen’s novels this wild space is usually called a shrubbery or a wilderness. In Mansfield Park, the wild space at Sotherton Court – the home of Maria Bertram’s fiancé – is called the wilderness – a name which is psychologically accurate, as we can see during Fanny and the Bertrams’ visit there. A lot of ‘wild’, primitive emotions, including resentment, lust, greed and jealousy, are unleashed here. 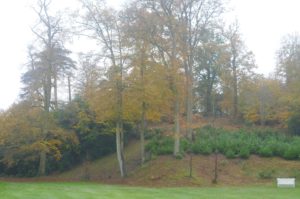 Mary Crawford, Edmund Bertram and Fanny, the book’s heroine, peel off from the others and set out to explore. ‘Here is a nice little wood, if one can but get into it!’ Mary cries.… The door, however, proved not to be locked, and they were all agreed in turning joyfully through it, and leaving the unmitigated glare of day behind. A considerable flight of steps landed them in the wilderness, which was a planted wood of about two acres, and though chiefly of larch and laurel, and beech cut down … was darkness and shade, and natural beauty…’

There is a touch of the biblical Garden of Eden in Jane Austen’s description of the Southerton Court wilderness – complete with serpent. Here the attractive but self-centred Mary Crawford tries to persuade Edmund Bertram into giving up the idea of taking Holy Orders. Fanny, who is not strong, says, ‘I wonder that I should be tired with only walking in this sweet wood; but the next time we come to a seat, if it is not disagreeable to you, I should be glad to sit down for a little while.’ 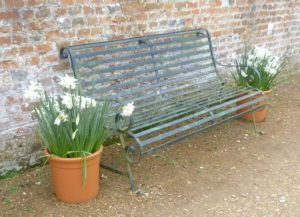 ‘My dear Fanny, cried Edmund, immediately drawing her arm within his, ‘how thoughtless I have been. I hope you are not very tired. Perhaps, turning to Miss Crawford, my other companion may do me the honour of taking an arm.’  The serpent raises its head.

‘Thank you, but I am not at all tired.’ She took it, however, as she spoke, and the gratification of having her do so, of feeling such a connection for the first time, made him a little forgetful of Fanny.

Ah, that first magic touch! Who says that Jane Austen doesn’t do sex?

They soon find a bench. Well sheltered and shaded, and looking over a ha-ha into the park, was a comfortable-sized bench on which they all sat down. Eventually, Mary urges Edmund to move on. Fanny said she was rested, and would have moved on too, but this was not suffered. Edmund urged her remaining where she was with an earnestness which she could not resist, and she was left on the bench to think with pleasure of her cousin’s care. Edmund and Mary leave and are soon out of sight and hearing.

The serpent has successfully tempted Edmund into a prolonged tête-à-tête with Mary, and poor Fanny is been left alone. The wilderness can also be described as a place where people’s true natures are shown up, and we note that Edmund comes across as pretty inexperienced with regard to women. Yes, he’s concerned about Fanny but, underneath, he wants to be alone with Mary – which is something he is not allowing himself to see – and it is Fanny who pays the price. 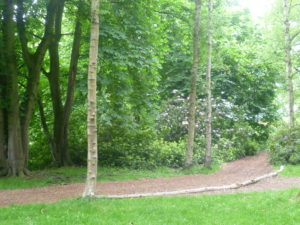 About half an hour later, Mr Rushworth, Maria Bertram and Henry Crawford appear at the bench and they commiserate with Fanny. Maria is desperate to off-load her cloddish fiancé, Mr Rushworth. She’d much rather spend the afternoon in the wilderness with the much more attractive Henry Crawford. Eventually she manages to persuade Mr Rushworth to fetch the iron gate key into the park.  Once he’s gone, she grabs the opportunity of having a tête-à-tête with Henry, and soon they, too, abandon Fanny. Once more, she’s alone.

Then Julia, Maria’s sister, appears, hot and cross. She is also in love with Henry and furious that Maria – who, after all, is engaged to Mr Rushworth – has disappeared with Henry. Fanny urges her to wait for Mr Rushworth, who will soon be returning with the key.

Julia refuses. ‘I have had enough of the family for one morning. I have but this moment escaped from his horrible mother. Such a penance as I have been enduring, while you were sitting here so composed and so happy … but you always contrive to keep out of these scrapes.’  And she too goes. 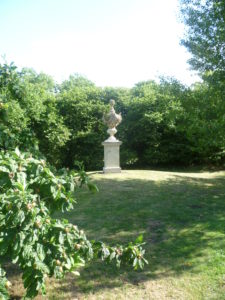 When Mary and Edmund eventually return, it’s obvious that ‘they were not aware of the length of their absence.’  And they had actually been to ‘that portion of the park into the very avenue which Fanny had been hoping the whole morning to reach at last.’  Fanny is left feeling disappointed and depressed.

Nobody, apart from Fanny, behaves well.

The whole scene is perceptively and subtly written and, once you’ve attuned your ears to Jane Austen’s frequency, it’s not difficult to pick up the sexual undertones. 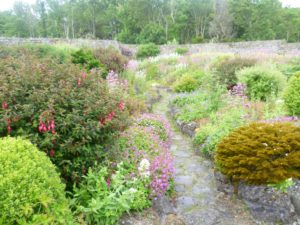 The shrubbery has another role to play; it is also a place where one can be alone, or, if with someone, not be overheard. Take Pride and Prejudice: even a modest country house like Longbourn had a fair number of servants. During the planning of the 1995 BBC adaptation of Pride and Prejudice, research revealed that a house like Longbourn would have had eleven servants. With that number, it must have been well-nigh impossible to be alone indoors. Lady Catherine de Bourgh knows this, and when she visits Longbourn to forbid Elizabeth’s possible marriage with Darcy, she insists on talking to her in the ‘prettyish kind of a little wilderness’ she spots rather than indoors where what she has to say may be overheard. 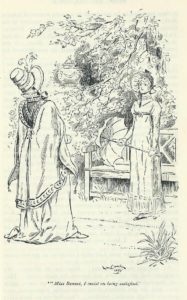 ‘Miss Bennet, I insist on being satisfied.’ Charles E. Brock’s illustration for Lady Catherine de Bourgh’s visit to Longbourn. Note the bench, and the Classical urn in the background.

Elizabeth leads Lady Catherine along ‘the gravel walk that led to the copse’. Lady Catherine informs Elizabeth that her ‘character has ever been celebrated for its sincerity and frankness’, and lets rip her outrage and resentment at the very idea of Elizabeth ever being engaged to Mr Darcy – something she is determined to thwart. Again, the wilderness allows the expression of unrestrained emotion which Lady Catherine could not express indoors.

The Longbourn ‘wilderness’ is the only place where Lady Catherine can give full rein to her disdain of Elizabeth’s inferior class. She has no compunction in telling her that she will be censured, slighted and despised by everyone if she marries Darcy. Elizabeth, too, takes advantage of the wilderness to express her own feelings: ‘’You can now have nothing further to say,’ she resentfully answered. ‘You have insulted me in every possible method.’ 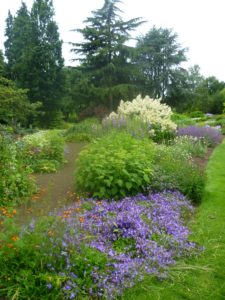 The shrubbery at Hartfield in Emma fulfil a slightly different function – but it is still a repository for emotion. Here, the shrubbery is a safe haven, as we see when, after the episode where the gypsies harass Harriet, Mr Woodhouse makes Emma promise ‘never to go beyond the shrubbery again.’ And after the conversation where Harriet reveals her hopes that Mr Knightley might be in love with her and want to marry her, Emma simply doesn’t know what to do. ‘She sat still, she walked about, she tried her own room, she tried the shrubbery…’  But, this time, even the shrubbery fails to contain her tumultuous feelings. 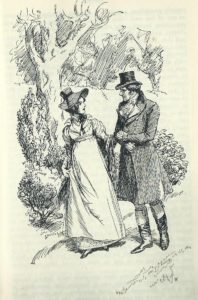 ‘He stopped to look the question.’  Hugh Thomson.

But the shrubbery can also be a place where harmony is restored and where love is offered, expressed and returned. After a stormy night, both real and psychological, it was summer again, and Emma loses no time in ‘hurrying to the shrubbery’. Here Mr Knightly finds her. Their emotions go from agitation, doubt, jealousy and discouragement to ‘the same precious certainty of being beloved.’  And who, on this earth, can ask for more?

An earlier version of this post was first shown in Libertà: https://libertabooks.com. My thanks to Sophie Weston and Joanna Maitland for inviting me.

10 thoughts on “Jane Austen: Emotion in the Shrubbery”