The Herb Garret, part of St Thomas’s Hospital which was founded in 1552 after the Reformation by King Henry VIII, (it had once been part of an Augustine Monastery) is one of the capital’s most unusual small museums. It is tucked away behind London Bridge station and not easy to find. You enter by a discreet wooden door, climb a steep spiral staircase, remember to duck your head at the top to avoid a low door frame, and eventually find yourself inside what looks like a large attic. 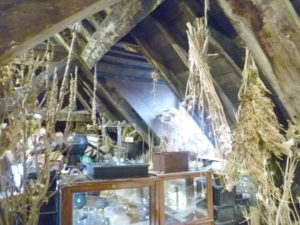 My first thought was: I’ve stepped into a time warp! All I could see in the dim light was a vast wooden structure of roof timbers, rafters and beams, with a plain wooden floor. As my eyes adjusted to the light, I began to notice crowded wooden shelves containing boxes, vials, bottles and even two baby crocodiles – what on earth were they used for? Bunches of dried poppies, lavender and meadow sweet hung everywhere. The very air smelt herby. This, I thought, is how it must have looked and smelt in 1822 – the date it became the herb garret for St Thomas’s Hospital. And, as a bonus for those of us who write novels set during the Regency period, it was almost exactly in period. 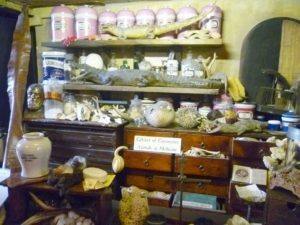 The Cabinet of Curiosities of things once used in medicine: note small crocodiles.

The Herb Garret which was where the hospital’s herbs were carefully dried, turned into tinctures, pills, etc. and stored. Up here they would be less vulnerable to vermin, and the huge timbers would help to stabilise the temperature and absorb extra moisture. 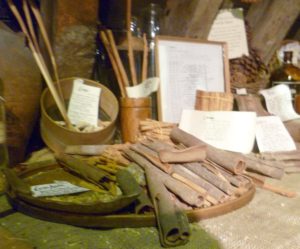 The plant collection is wide-ranging; for example, there are boxes of willow bark, its anti-inflammatory properties help to relieve pain and reduce fever; cinnamon has been shown to lower blood sugar levels and was used in the treatment of heart disease; and ginger root helps with digestion and reduces chronic pain; and there are numerous other seeds, leaves and flowers. 70% of modern medicine still comes from plants, and knowledge of their medicinal properties goes back hundreds of years. 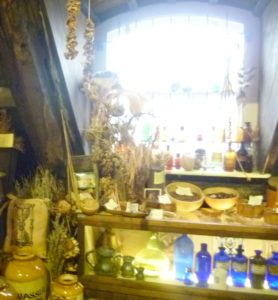 Plants could be prepared as infusions, teas, tisanes, decoctions, tinctures and syrups, depending on what was needed. Tinctures, for example, used alcohol, vinegar or glycerine as solvents. The chosen herb was finely ground and added to 40% proof alcohol, say, and carefully shaken every day. After two weeks, the liquid was decanted, wrung out in a muslin cloth and stored in a dark bottle. 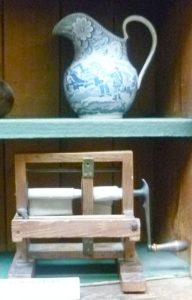 We were shown how to make a poultice to draw out infection. (Georgette Heyer fans will have come across poultices being used to excellent effect on horses in Sylvester and The Quiet Gentleman, for example.) Here’s one recipe. Take a measure of linseeds and put them in a bowl and add boiling water – leaving plenty of space for the linseeds to swell. After about twenty minutes, the linseeds will have absorbed all the water and the mixture will now be the texture of thick porridge. 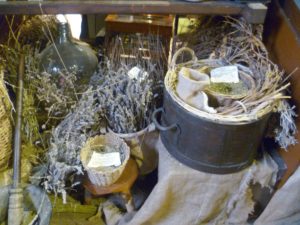 You then spread the mixture onto parchment, chamois leather or paper – whatever comes to hand, really – and bandage it, as hot at the patient can bear, onto the afflicted place. As the poultice cools and dries, it will draw out the infection.

It is messy and time-consuming but it works. 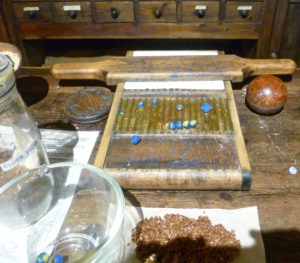 We were also shown how to make pills, another time-consuming job. Even though there was a gadget to cut the pills to the right size, they had to be rolled into balls individually and sprinkled with talcum powder to stop them sticking together. If they tasted particularly disgusting, they would be dusted with icing sugar (which cost more). An apothecary could get through 10,000 pills a week – and usually it was the wretched apothecary apprentice whose job it was to make them. An apprenticeship lasted seven years – and, as we watched, it swiftly became obvious that there was an awful lot to learn. 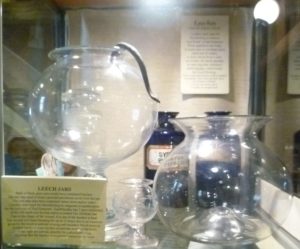 The Herb Garret goes into some detail about how disease used to be treated. For example, there is a leech jar on display. Surprisingly, leeches are still used today as the best option for removing congested blood from a wound, thanks to the leech’s ability to secrete anticoagulants. Also, if you had an accident and chopped off a finger, the surgeon could sew it back on – and the arteries (touch wood) would be fine – they are tough. The veins are another matter as they are fragile and tend to crumble. But a leech will suck blood slowly and carefully which allows a damaged vein the time it needs to reconnect and repair itself and for capillaries to re-form. 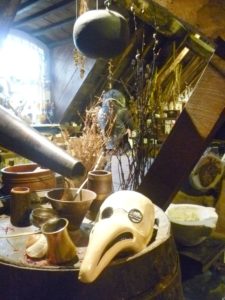 Note the plague mask! The nose was filled with herbal material, including mint, camphor, dried roses and carnations, to protect the doctor from the plague. The glass eye holes enabled one to see and there were two small nostril holes to breathe through. 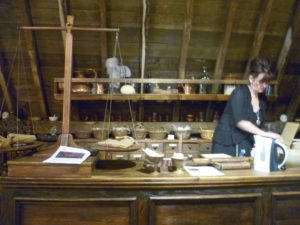 In writing this post, I couldn’t help but be aware how relevant it was to the difficult situation we are in at the moment. Our modern face masks have taken the place of plague masks, for example. And the pills and infusions being made in the herb garret were tackling similarly life-threatening medical problems to those we face today.  I really felt for those 1822 apothecaries.