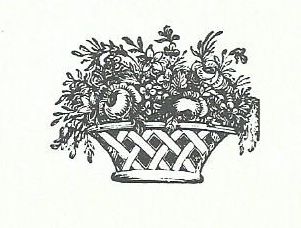 There is an interesting exchange early on between Mr Bennet and his wife about the Militia’s arrival in Meryton and its effect on his two youngest daughters, Catherine and Lydia, which proves my point. Mr Bennet listens to Kitty and Lydia’s effusions and then observes: ‘From all I can collect by your manner of talking, you must be two of the silliest girls in the country.

‘Catherine was disconcerted, and made no answer; but Lydia, with perfect indifference, continued to express her admiration of Captain Carter…’  Note: Lydia doesn’t give two hoots what her father thinks of her. That’s rare, surely, given that she is only fifteen. What’s more, most fathers would surely be concerned by Lydia’s reaction. 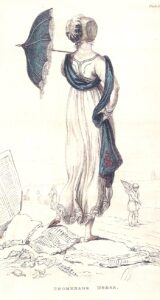 Lady at the seaside

There is a more serious scene later on, when Lydia doesn’t take her father’s ‘No’ about her going to Brighton as the guest of Colonel Forster’s wife seriously and continues to pester him. Will he give in? Jane Austen surely lays the seed of Mr Bennet’s capitulation much earlier with his toleration of his youngest daughter’s lack of respect.

In my view, it is Lydia’s self-centredness which pushes the plot forward in a number of important ways. It is Lydia who, when she and her mother and sisters visit the ill Jane at Netherfield, accosts Mr Bingley and demands that he holds a ball there. Lydia may be the youngest of the Bennet girls, but she is a ‘well-grown girl with a fine complexion and good-humoured countenance … She had high animal spirits, and a sort of natural self-consequence which the attentions of the (militia’s officers) had increased into assurance.’

Lydia doesn’t bother to lie, she simply does what she wants. And, even at fifteen, she knows exactly how to twist a man round her little finger. What Lydia wants above anything else is to enjoy herself – and to get what she wants, preferably immediately. 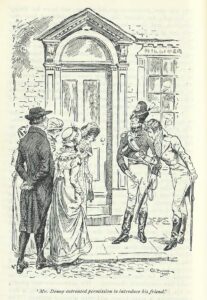 Mr Bingley agrees to hold a ball and tells her that, once Jane is recovered, she, Lydia, can choose the date. He adds, ‘But you would not wish to be dancing while she is ill?’

Lydia declares, ‘Oh yes – it would be much better wait until Jane was well.’ But the alert reader is entitled to wonder about Lydia’s casual comment on Jane’s health. She seems more concerned about one of her favourite officers, Captain Carter’s return from leave – she expects him to hold a ball, too.

Lydia may want the ball so that she can dance with all the Meryton officers – but Jane Austen uses the event to illuminate Mrs Bennet’s character; to show Darcy’s pride (and rudeness to Elizabeth); to allow Jane and Mr Bingley a number of dances together; and for Mr Collins to force himself upon Mr Darcy’s notice – to Elizabeth’s acute embarrassment. All of these things have consequences for the working out of the story. 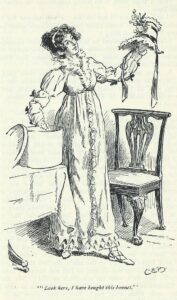 Lydia is also useful to the plot in the scene when she and Catherine meet up with Jane, who has been in London with Aunt Gardiner, and Maria Lucas and Elizabeth who have been  staying at Hunsford with Charlotte and Mr Collins. They all arrive at the inn where Mr Bennet’s carriage will meet them and take them home. Lydia, as usual, has been wasting money – this time on a bonnet – ‘I thought I might as well buy it as not. I shall pull it to pieces as soon as I get home and see if I can make it up any better.’  She also tells Elizabeth and Jane the woeful news that the militia is due to leave Meryton in a fortnight. It is news that gives Elizabeth ‘the greatest satisfaction.’

Elizabeth is still reeling, not only from Darcy’s unexpected proposal, but also his subsequent letter which tells her Mr Wickham’s true story. The last person she wants to see is Mr Wickham – thank goodness the Militia is leaving.

Lydia, of course, feels very differently. ‘They are going to be encamped near Brighton; and I do so want Papa to take us all there for the summer. It would be such a delicious scheme, and I daresay it would hardly cost anything at all.’  Lydia, we note, hasn’t a clue about money. Brighton is a very fashionable watering-place, and staying there for the summer would be expensive – not to mention the cost of new evening dresses, shoes, gloves etc. which the Bennet ladies would need.

Throughout the journey back to Longbourn, Lydia’s mind runs on men: she asks Jane and Elizabeth if they have been flirting. She upbraids them for not having got a husband and tells Jane, who is twenty-three, that she will soon be on the shelf. ‘Lord! how ashamed I should be of not being married before twenty-three.’ Lydia has no thought for how Jane must be feeling, still heartbroken from losing Mr Bingley.

When they get back home, Elizabeth becomes aware that her mother is trying to persuade her husband to take them all to Brighton. She can see that her father ‘has not the smallest intention of yielding.’ But why does he not openly say so? 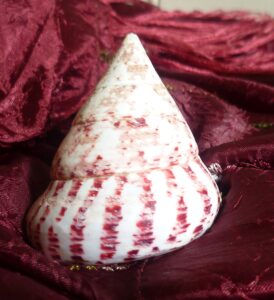 Once again, Lydia takes charge of the plot. Her intimate friend Harriet, the new wife of Colonel Forster, invites her to Brighton and Lydia is in raptures.

Elizabeth has a word with her father, begging him not to let Lydia go. ‘If you, my dear father, will not take the trouble of checking her exuberant spirits, and of teaching her that her present pursuits are not to be the business of her life, she will soon be beyond the reach of amendment. … (Kitty) will follow wherever Lydia leads. Vain, ignorant, idle and absolutely uncontrolled! Oh, my dear father, can you suppose it possible that they will not be censured and despised wherever they are known, and that their sisters will not often be involved in the disgrace?’

This is serious stuff, and Elizabeth is in earnest but Mr Bennet, an idle man, who tries to avoid unpleasantness if he can, is not to be moved. He tells Elizabeth that Colonel Forster is a sensible man and that Lydia will probably meet with a rebuff and be taken down a peg or two. The readers notice how cleverly Jane Austen has got Lydia to Brighton – a place with a dubious reputation for scandal and sexual intrigue – and the morally dubious Wickham is there with the Militia …. Lydia has won and got what she wanted. 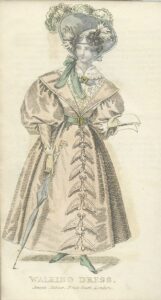 Furthermore, the readers have also become aware that Wickham may want to score off Mr Darcy – who, a few years previously, foiled Wickham’s plot to elope with his sister Georgiana and get control her £30,000 dowry. And Elizabeth has let Wickham know, subtly, that she knows the true story …

Will Wickham let it ride? Or will he want to pay Darcy and Elizabeth back? And, if so, how?

Once again, Lydia is the catalyst for the next step: she elopes with Wickham. 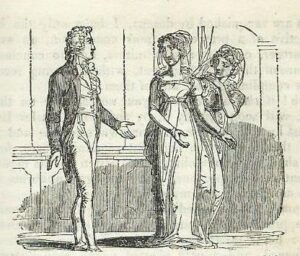 ‘Lovers’ from The Pocket Magazine

A writer’s main job is to keep up the tension and the ending of Pride and Prejudice shows this perfectly. What keeps readers reading is that the hero/heroine get things wrong. Elizabeth and Darcy both get each other wrong for much of the book – and we are kept on tenterhooks because of it. However, after they meet again at Pemberley, it looks as though they are going to get together. What is to stop them? But Pride and Prejudice is a three volume novel and the story is only just into volume III. What does a good author do? Jane Austen flings in another problem – and Lydia initiates it by eloping with Wickham, a man who once tried to elope with Darcy’s sister. In 19th century terms, Lydia’s action damns her sisters by association. Would Darcy’s pride let him marry a girl from a disgraced family, and have the despised Wickham as a brother-in-law, to boot?

Wickham himself has a further role to play – as villain. He is in a good position to expose Darcy’s weak spot – his ingrained pride which will be sorely lacerated if Wickham can get the better of him. In other words, he, too, strives to be a catalyst, this time to damage and hurt Darcy.

But Darcy is our hero; his job is to stand up to the villain and come good. Darcy tracks down Wickham and Lydia with great difficulty, and, though it goes against the grain, he negotiates a financial deal with him. If Wickham agrees to marry Lydia, Darcy will pay his debts, he will also pay for Wickham’s ensigncy in the regular army; and settle £1000 on Lydia. 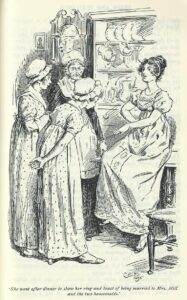 Lydia shows off her ring to the Longbourn servants

Lydia’s elopement triggers Elizabeth’s almost instant realization that Lydia running off with Wickham has put paid to any hope of Darcy still wishing to marry her – he would surely detest the very thought of having Wickham as a brother-in-law. Lydia’s action forces Elizabeth to examine her heart and to realize at last that she loves Darcy and that he could have made her happy. ‘It was a union that must have been to the advantage of both: by her ease and liveliness, his mind might have been softened; his manners improved; and from his judgement, information and knowledge of the world, she must have received benefit of greater importance.’ Lydia’s elopement threw a spanner into the works and instantly, the dramatic tension rose. Elizabeth’s future happiness is once more at stake. 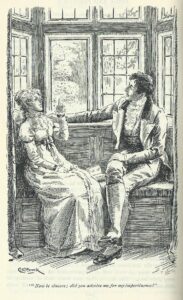 Elizabeth and Darcy – engaged at last

So what happens to Lydia at the end? There is a telling sentence towards the end of Lydia’s letter to Elizabeth, now Mrs Darcy, where she writes: I do not think we shall have quite enough money to live upon without some help. It is the first – and only – time that Lydia has ever admitted to any flaw in her ways of going on. She adds: ‘It is a great comfort to have you so rich; and when you have nothing else to do, I hope you will think of us.’  Is it possible that even Lydia has doubts?

The Pride & Prejudice illustrations are by Charles E Brock