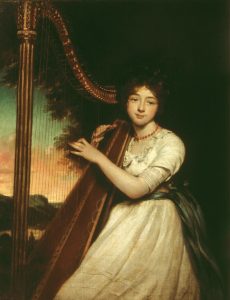 The harp has come by carrier from London to Northampton, and Mary is astonished that no farmer will hire out his cart to bring it to Mansfield Park parsonage, where she is staying with her sister, Mrs Grant. ‘I thought that it would only be ask and have… Guess my surprise when I found that I had been asking the most unreasonable, the most impossible thing in the world!’

Edmund explains that farmers are ‘in the middle of a very late hay harvest’ but it is obvious that Mary doesn’t understand the importance of this. She thinks that  her convenience should come first and that ‘everything is to be got with money.’ 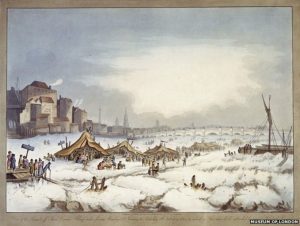 Jane Austen completed Mansfield Park in 1814, a year which had had one of the coldest winters on record; for most of January and February, the temperature in London was well below freezing. Even by midsummer’s day, icy patches still lingered in the countryside and 1814 became known as ‘the year without a summer’. The rising cost of fuel led to great hardship amongst the poor and a late and patchy harvest meant that the cost of bread rose. Starvation beckoned. Edmund is well aware of this. Mary chooses to ignore it. Jane Austen’s original readers would have chalked up Mary’s self-centredness.

This little episode reminds us that Jane Austen was a contemporary writer, not an historical one. She wrote about the here and now of her time and her readers would have picked up her references.

However, Mary’s brother Henry has offered to collect the harp in his barouche. ‘Will it not be honourably conveyed?’ asks Mary, brightly. Edmund ignores this as he will ignore other clues about Mary’s character. Instead, he says that the harp is his favourite instrument and begs to be allowed to hear her play. 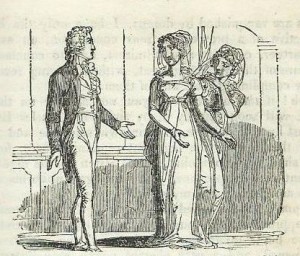 At this stage, Mary is more interested in Tom, Edmund’s brother, and heir to the baronetcy. But Tom has gone off to the races. Mary tries to lure him back. ‘Now, Mr Bertram, if you write to your brother, I entreat you to tell him that my harp is come, he heard so much of my misery without it… I shall prepare my most plaintive airs against his return, in compassion to his feelings, as I know his horse will lose.’ Does Edmund recognize her little game? If he does, it’s unconscious. He fails to take the hint and states that he has no occasion to write to his brother. In affairs of the heart, Edmund is worryingly naïve.

But we learn something else, too; that Mary sees her skill with the harp as part of her sexual armoury. An elegant woman, sitting at an elegant instrument, allowing her bare arms to show (sleeves would risk getting caught in the strings) as she plays, has a very seductive instrument in her hands. And by Chapter 7, she’s in a fair way to capturing Edmund’s heart with its aid. 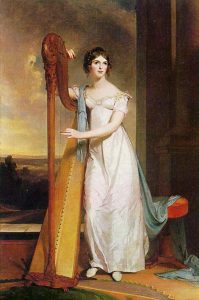 Lady with a Harp, Eliza Ridgely by Thomas Sully, 1818

Once her harp is in the parsonage, it has to stay put and, if Edmund wants to hear her play, he must visit her there. As Jane Austen put it: ‘A young woman, pretty, lively, with a harp as elegant as herself …. was enough to catch any man’s heart. The season, the scene, the air, were all favourable to tenderness and sentiment. Mrs Grant and her tambour (embroidery) frame were not without their use (Mary needs a chaperone) it was all in harmony.

Mary knows exactly how useful the harp is for a young woman who needs to be chaperoned when with a young man. It provides the perfect excuse, and every morning’s playing ‘secured an invitation for the next.’ The spider has the perfect cobweb to lure her prey.

It is interesting that Edmund’s daily visits to the parsonage go unnoticed by the rest of his family – apart from Fanny.  But he’s a man – he doesn’t need to be chaperoned.

Fanny can’t go uninvited to the parsonage, and we can see the skill with which Jane Austen keeps us – and Fanny – on tenterhooks. Part of Fanny wants to hear the harp for herself, and another part of her, surely, wants to keep an eye on what is going on between Mary and Edmund – however painful it might be. 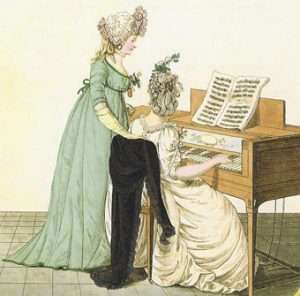 Two Regency Ladies at the Pianoforte

It is not until Chapter 22, that Fanny is at last invited to the parsonage. Edmund is away from Mansfield being ordained, and Maria, now married to Mr Rushworth is on her honeymoon, accompanied by Julia – an odd custom, but one which was common at the time. If Mary wants some young company, Fanny is the only person available.

Fanny expresses a wish to hear the harp and Mary is very obliging and laps up Fanny’s wonder and admiration at her playing. She insists that Fanny stays: ‘I want to play something more to you – a very pretty piece – and your cousin Edmund’s prime favourite. You must stay and hear your cousin’s favourite.’ I can’t help wondering if Mary has, perhaps unconsciously, picked up Fanny’s interest in Edmund and wants to demonstrate her own hold over him by a bit of flaunting.

Young Lady at the Pianoforte, 1808

Poor Fanny. Part of her is pleased to hear Edmund’s favourite air but another part of her is desperate to get away from the parsonage, and Mary. Instead, she finds herself going over every few days. ‘It seemed a kind of fascination; she could not be easy without going, and yet it was without loving her, without ever thinking like her, without any sense of obligation for being sought after now when nobody else was to be had; and deriving no higher pleasure from her conversation than occasional amusement; and that often at the expense of her judgement…’   This is deep stuff and we realize that Fanny’s responses to Mary show a growing confidence in her own judgement of Mary’s character, even if, emotionally, she, too, is trapped by Mary’s web.

But Fanny is learning fast. She successfully fends off Mary’s probes about what Edmund thinks of the Miss Owens with whose family he is staying after his ordination. Mary also tries to extract an assurance from Fanny that Edmund will miss her once she returns to London, as she soon must, but Fanny refuses to oblige. 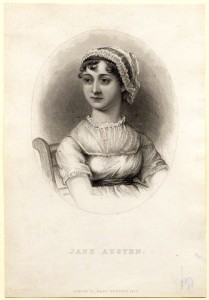 The harp has now done its work of enticing Edmund and we hear no more of it. From now on it will be Mary’s own behaviour which determines whether Edmund proposes to her or not. As for Fanny, the harp has also played its part in her own development. Each time she hears it played at the parsonage, she returns more and more convinced of Mary’s lack of a moral compass.

It may seem that Mary’s harp has a very minor role in Mansfield Park, but, imagine the plot without it, and one soon realizes that its role is pivotal. It is more than just a harp, it is a means by which Mary’s character – and Edmund’s gullibility – can be demonstrated to discerning readers; and, indirectly, it provides Fanny with an opportunity to grow in understanding.