This post is about two Arts and Crafts oak chairs with Walter Crane tiles, bought for ten shillings (50p),  with an intriguing story to tell. My mother, who loved auctions, got them from Mr Little’s Salerooms in Barnard Castle, an attractive upper Teesdale market town. 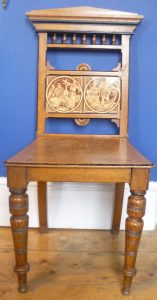 They were, she explained, hall chairs, you weren’t meant to sit on them. In fact, they are excruciatingly uncomfortable, not to mention unsafe. I wouldn’t trust the front right leg of one of them (see photo above) and the other creaks ominously. But I like them, and I’m a fan of Walter Crane (1845-1915), an eminent artist who collaborated with William Morris. The tiles say a lot about late Victorian England and what people thought was important about English history. (And it’s definitely English history, as opposed to British.) 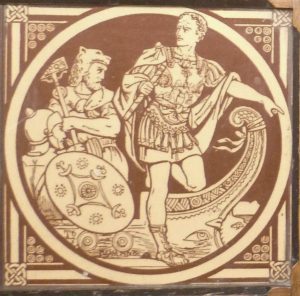 Each chair has two tiles. The earliest, historically speaking (54 B.C.), is Julius Caesar stepping proudly down from a Roman ship – looking amazingly unruffled, considering that his fleet has only just survived a ferocious storm. Behind him, a standard bearer holds the Roman standard saying SPQR, (Senatus Populusque Romanus: The Senate and the People of Rome) the symbol of the Roman republic and its democratic rule by all its citizens – at least, in theory, and providing they were male, and free.

The Victorians approved of the Romans; they saw the British Empire as inheriting the Roman Imperial mantle. From the 19th century point of view, the Romans came to civilize the barbarian Britons. What is conveniently glossed over is that the Romans, having, with difficulty, defeated Cassivellaunus, the powerful king of the Catuvellani tribe, took a few hostages, demanded an annual tribute, and left, not to return for ninety years. So not much imperial authority in evidence there! 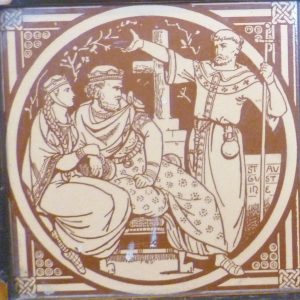 The second tile shows St Augustine preaching Christianity to a scowling King Ethelbert of Kent and his approving Frankish wife, Bertha in 597 A.D. Pope Gregory the Great had sent Augustine to convert the English to Christianity (though, in fact, a number of Christians had already been converted by Irish priests in Roman times). Ethelbert’s influence spread as far north as the Humber, so he was a fish Pope Gregory wanted to land; and he was after control as much as conversion.

King Ethelbert hedged his bets and continued to worship Thor and Odin as well as allowing Augustine to preach Christianity and build churches. There were no forced conversions and he himself only converted on his deathbed. 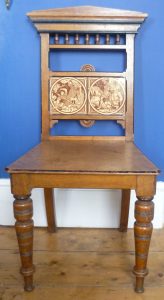 Spreading Christianity was also something the Victorians approved of; it gave the British Empire a sort of moral legitimacy in their eyes. So we can see that, in theory, the tiles commemorate important historical episodes; but they are also suggesting, subliminally perhaps, that English history has been guided by Divine approval. 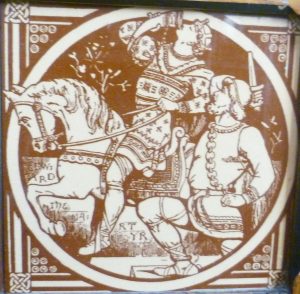 The second chair continues the English history lessons chronologically. The next tile shows the death of the Anglo-Saxon king, Edward the Martyr, who became king when he was fifteen. His claim to the throne was disputed by his step-mother, on behalf of her son, Ethelred, who was only ten (Edward may have been illegitimate). The succession was decided in Ethelred’s favour. Edward went to Corfe to visit his half-brother and step-mother, where he was dragged from his horse and murdered.

The tile shows Edward, head thrown back, draining the drinking horn he has been offered in welcome, while a dastardly retainer is about to plunge a dagger into his back. When Ethelred grew up, he enthusiastically promoted his dead brother as a saint and martyr, ‘who, drenched with his own blood, the Lord has seen fit to magnify in our time through many miracles.’ Having a brother as a saint undoubtedly promoted Ethelred’s own status – and he needed it; he was to become notorious in English history as ‘Ethelred the Unready.’

A tile showing Edward the Martyr is a curious choice to modern eyes but it confirms, I think, the importance to Victorians of cementing the Christian faith with royal, if somewhat dubious, martyr’s blood, if necessary. 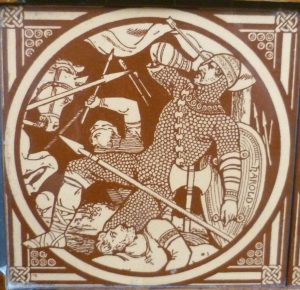 The Death of Harold by Walter Crane

The last tile shows a scene which is more familiar to us; the death of King Harold in 1066. Crane shows him clad in chain mail, falling to the ground, his hand clutching the arrow in his right eye. Nowadays, we are more ambivalent about the Norman Conquest than the Victorians were. For them it was a Good Thing, and Harold’s perjury in swearing an oath on holy relics to support William becoming king when Edward the Confessor died, and then reneging, proved that he was a villain. Being killed by an arrow through your eye was a sign that you were a perjurer.

Again, the tile has a Christian lesson: Harold died a perjurer’s death and William was rightful king of England. And, by extension, the English, and later, the British, ruled ‘by Heaven’s command.’

I’m not sure what tiles I’d go for, if I had the choice. I’d have to think carefully about what line I wanted to take. If I wanted to emphasize Britain’s democracy, for example, I might start with King John signing Magna Carta at Runnymede. And I’d certainly want to include Welsh, Scottish and Northern Irish hisdtory.

6 thoughts on “My History Chairs and their intriguing story”