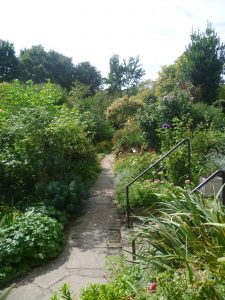 The railing on the right of the photo leads up to the tea room. There’s a patio in front of it and here I met Terry, who has had an allotment for four years. He kindly took me to see it. ‘It’s a bit overgrown,’ he said, apologetically. He’s begun to clear it but the recent rain has encouraged more weeds to grow. I admired his decorative Japanese anemones. I noticed that Japanese anemones appear in a number of allotments and, as this is a friendly place, I suspect that many allotment holders have passed them on to their neighbours. Terry wasn’t too keen on being photographed but he OK’d this discreet shot. 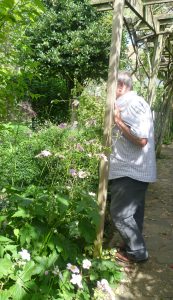 Terry and his Japanese anemones

As I wandered round, my eye was caught by a beautiful vivid yellow rose. It was almost the last one and it had a late summery scent, slightly musky. 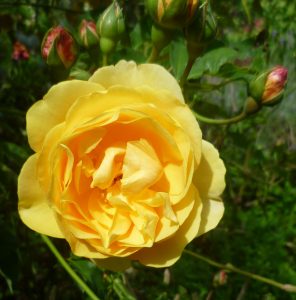 Ever since I’d discovered an emerald green rose beetle in a rose in Albania, (see post, ‘The Rose Beetle’, 18th September, 2016) I keep hoping I’ll see another one. Alas, this rose had no rose beetle, but it was beautiful, all the same. 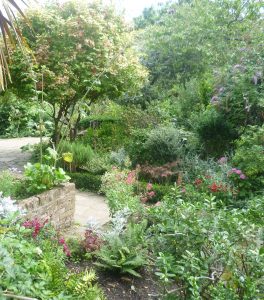 Looking through the garden north to south

The allotments’ borders are discreet and one garden seems to flow into another. I can see some valerian and buddleia among the late summer red and purple blooms. A tree in the background is already showing hints of autumn colour. 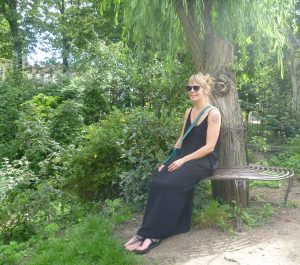 On the east side of the garden, there is open space, with grass and a graceful weeping willow with a circular bench around it. People often pop into the garden for a quiet half hour and here I met Naomi sitting under the willow tree. She’d come up to London for the day and found the community garden quite by chance. ‘This is a very peaceful place,’ she said, and I agreed. Its serene atmosphere is one thing I really like about it. 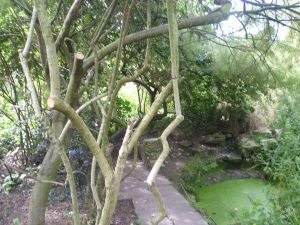 Trees have been pruned but the pond weed proliferates

We chatted for a bit, then I said good-bye to Naomi went to look at the pond. Back in March, the water was clear and there were tadpoles and newts. Now it is almost completely overgrown, and what little water you can see is covered in pond weed. Terry had mentioned that the gardens were dependant on volunteers and that, at the moment, the numbers were down. It’s a real pity, but, perhaps once the summer holidays are over, the pond will get cleared. I hope so. 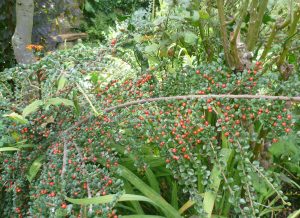 The vivid scarlet berries of the cotoneaster

Behind the pond, a cotoneaster’s red berries offer a tempting feast to the birds who live here. It’s a reminder that the Culpeper Garden was planted specially to harbour wildlife and, even though it looks a little neglected just now, the birds have not been forgotten. 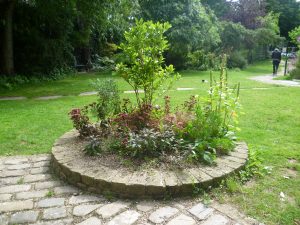 The planter with sedums

Wandering back towards the entrance, I met Isabella and we sat for a while on the long bench and admired the round planter. Isabella teaches art and she has taken workshops at the Culpeper Garden’s Resource Centre. We discovered that we were both allergic to cats and found ourselves comparing the asthmatic horrors we’d suffered as children in the days before inhalers. That’s what I like about this place. You meet interesting people and you never know where the conversation will lead! 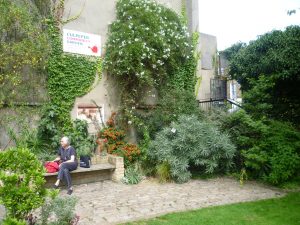 Just as I was thinking I ought to be going, I spotted a friend. Marianne Fox Ockinga is an artist, specializing in woodcuts, watercolours and drawings. When I first knew her, she was the official artist recording the building of the Emirates Stadium, home of Arsenal Football Club.

I introduced her to Isabella. Isabella wasn’t happy about being photographed, so I’ve made sure that she’s invisible.

Marianne kindly invited us both to the N22 Open Studios private view on 22nd September where she’s exhibiting. She is in Chocolate Factory 1, Clarendon Road, Wood Green. The card says ‘Three Buildings with over 100 Artists’. It sounds amazing. 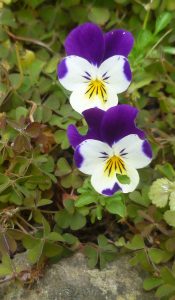 The last pansies of summer

Typical, I thought. I start out with the idea of catching up on what’s going on in Culpeper Gardens, and end up being invited to an Art Exhibition!

2 thoughts on “Return to Culpeper Garden”