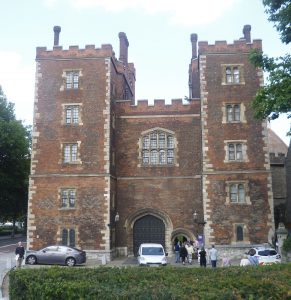 We enter via the 15th century gatehouse which leads to a quadrangle comprising various buildings, including the chapel, the Great Hall and library, the archbishop’s private accommodation and various state rooms. They are all full of interest but, today, I’m concentrating on the garden. The first thing I notice are the  fig trees, originally planted by Cardinal Archbishop Pole in 1556 (he was appointed by Mary I to oversee the reinstatement of the Roman Catholic Church). The figs are the ‘White Marseilles’ variety which crops twice a year with delicious sweet white-fleshed figs. The trees are under-planted with native spring bulbs and, for the autumn, with pink cyclamen. 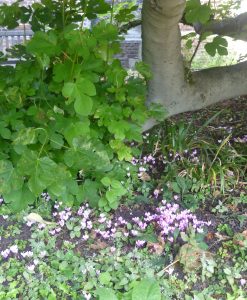 Behind the quadrangle lies the palace’s ten-acre garden. It’s a bit of a hotch-potch, but I like that; a number of archbishops (including Cardinal Pole) have left their marks on the garden. 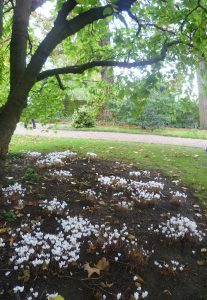 For example, in 1992, Archbishop Robert Runcie planted a white mulberry tree to celebrate the release of his special envoy, Terry Waite, who had been kidnapped and imprisoned by Hezbollah in Lebanon five years earlier. It is now a fine tree and under-planted with white cyclamen. 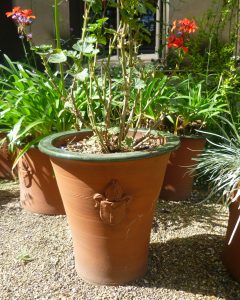 I was very taken by some of the terracotta plant pots – complete with an ecclesiastical crest as part of the decoration. They are varied in size and shape. I’m not sure if the crest belongs to a specific archbishop, the one who commissioned the plant pots, say; or whether it’s a generic Archbishop of Canterbury crest. 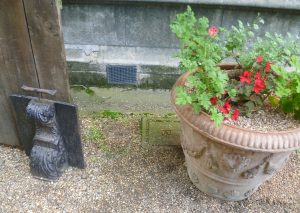 Nearby a huge iron door stop (which looks as though it weighs a ton) props open a heavy wooden door. I rather liked how this photo of a slightly neglected corner turned out and I allowed the decorative plant pot beside the door stop to remain. 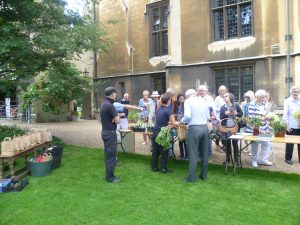 Nearby, a couple of trestle tables have been set up to sell plant cuttings, plum jam and plum chutney. Unfortunately, I am too late for the honey (there are rows of bee-hives at the back of the garden). This is the last open Friday of the year and it’s good to see that they are doing a brisk trade; the money raised goes to the chosen charity of the month. 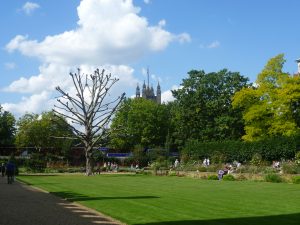 Lawn with raised terrace behind it

The shape of the garden is essentially a long oblong with a sizable lawn nearest the palace with a raised terrace behind it. It’s exactly the right size for garden parties and outdoor entertaining, and that’s how it’s often used. I rather like the decorative but ferociously pruned tree and the glimpse of Westminster Abbey’s tower through the trees in the background. 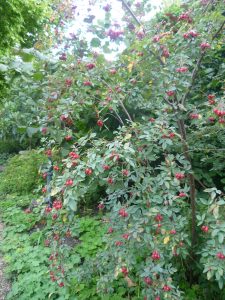 Behind the terrace, there is another open area which is more like a park, surrounded by trees: including a native hedge with blackthorn, field maple, hawthorn, hazel, wild rose, spindle etc.; the Long Walk with plane trees, woodland shrubs and herbaceous planting; and a rowan avenue. 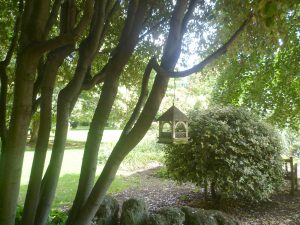 Birds are not forgotten, and I stopped to admire the shapes of the tree’s branches contrasting with the large, slightly Gothic-looking bird feeder hanging down from a branch. 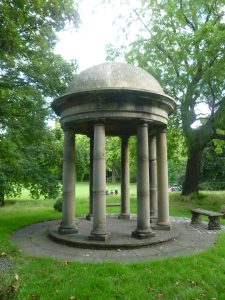 The rotunda on the Little Mound

I love the elegant eighteenth century rotunda standing atop the Little Mound – which was surely built to show it off. Perhaps one of the eighteenth century archbishops had a meditative mind or a turn for poetry. The mound itself will soon be covered in early November snowdrops and snake’s head fritillaries will appear next April. 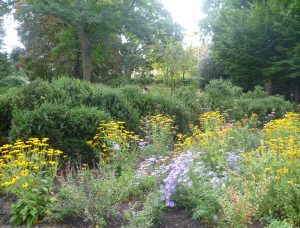 Just behind it is a long late summer border full of rubekias and what look like Michaelmas daisies. The palace garden’s summer planting is definitely coming to an end. Still, there are lots of berries to admire: rowan, hips and haws, pink spindle berries – not yet split to show their clashing orange centres, and doubtless the mulberries’ fruit, too; not to mention the fig trees’ October crop of figs soon to come. 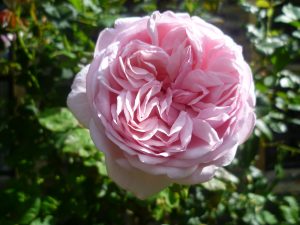 There are a very few roses still in bloom, including this beautiful pink one – and it has the most delicious scent. It’s a good note to end on. I really enjoyed seeing this garden and I’m looking forward to re-visiting it in the spring.