No such thing! Carter, like his sponsor, George Herbert, 5th Earl of Carnarvon, stayed in comfort at the resplendent Winter Palace Hotel in Luxor which had been built in 1905 as a luxury hotel. 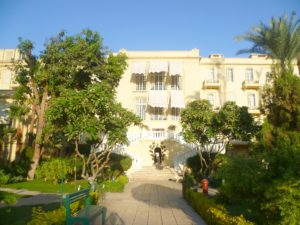 The garden entrance to the hotel

Approaching the hotel from its extensive gardens, there is an elegant double-flighted staircase which takes you up to the magnificent entrance hall. It is plainly designed for graceful ascents – or descents, with treads just the right width and depth for comfort. The ground level alcove between the two stairs holds a nude Greek statue. 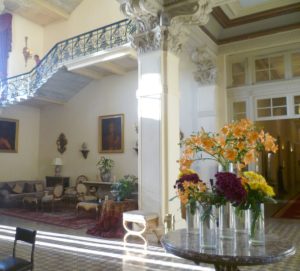 The entrance hall is spacious and welcoming. Fresh flowers are brought in from the garden every day. Back in November 1922, word spread quickly of the momentous discovery and the International Press Corps descended on the hotel, together with a number of wealthy foreign visitors. Carter liked to use the hotel’s noticeboard to inform guests of any special news and as a venue for meeting people. 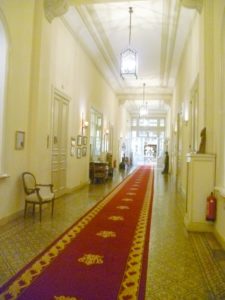 On the left of the impressive corridor, there is a large saloon for traditional afternoon tea. Next to that is a smaller dining-room for hire. On the right side of the corridor is Howard Carter’s bar; it is here he made the announcement of his stupendous discovery. Beyond that, is the breakfast/dining room.

There are a number of showcases along the corridor walls of historical interest. One relates to the 1922 Tutankhamun excavation, and another to Dame Agatha Christie who stayed here whilst writing Death on the Nile (1937). 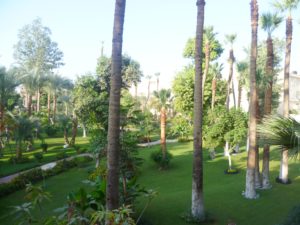 The gardens of the Winter Palace Hotel

The garden is extensive, full of palm trees and other shrubs, various water features and pleasantly winding paths, and places to sit. The air is wonderfully scented, particularly in the evening. It is manned by a number of gardeners who water, sweep, cut flowers for the hotel and generally keep everything in tip-top condition. Other members of staff look after those guests who prefer to lie beside one of the pools with a cocktail or coffee.

Ah! The trials of being an archaeologist! 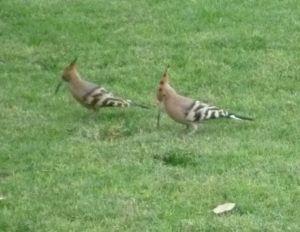 A pair of hoopoes. Alas, I waited but they wouldn’t raise their crests for me.

Several pairs of hoopoes, those charming birds I always think look slightly demented, have made the hotel garden their home.

Nowadays, the garden also has an outdoor barbecue, music, quieter spaces to sit and so on. The dress code is informal but tidy, and the ambience is welcoming.

All photos by Elizabeth Hawksley, unless otherwise stated

The modern Sofitel Pavillon Winter Luxor Hotel is an extension of the historic Winter Palace Hotel.