A week or so ago, I was invited to the preview of the V & A’s terrific new exhibition Undressed: A Brief History of Underwear. Lucky me, I thought,  at last I shall be able to see exactly what a Regency Buck wore underneath his skin-tight pantaloons and superbly-tailored coat.

Fortunately, the hunky cameramen wielding tripods and cameras were more transfixed by the 1970s brass bra and harem pants, not to mention the sexy silk satin and lace negligée as worn by Bérénice Marlohe, the femme fatale Bond girl in Skyfall, than by the Regency male underwear on display. The woman standing next to me raised her eyes to the ceiling and muttered, ‘Typical!’ So I was able to study the Regency Buck undressed in peace.

First, the linen shirt. (The exhibition had only two examples.) The shirt was worn next to the skin and not meant to show – in other words, it was the male equivalent of a woman’s shift. The high neckband closed with three buttons and the gentleman’s neck cloth wrapped around it. This could be a cravat, a large square of lawn, muslin of silk which folded into a band and wrapped round the neck in a variety of ways from the Oriental to the Trône d’Amour and the Mathematical, or a plainer stock, a stiffened neckband buckled or tied behind.

The correct tying of a cravat was of crucial important to any man of mode as Richard Wyndham in Georgette Heyer’s The Corinthian attests. Here he meets the heroine, Penelope Creed, who is escaping from her aunt’s house.

‘I’, said Sir Richard, ‘am Richard Wyndham, wholly at your service.’

‘Beau Wyndham,’ bowed Sir Richard. ‘Is it possible that we have met before?’

‘Oh no, but of course I have heard of you. My cousin tries to tie his cravat in a Wyndham Fall. At least, that’s what he says it is, but it looks like a muddle to me.’

‘Then it is not a Wyndham Fall,’ said Sir Richard firmly.

Regency man; note that he is wearing a waistcoat and his actual shirt is not visible. 1817

The cuffs of the linen shirt are plain and the ruffles would have been attached separately – which meant they could be washed more easily. Fans of Georgette Heyer’s Faro’s Daughter will remember the episode where Deb locks Mr Ravenscar in the cellar and he escapes by burning the rope that bound his wrists with a candle she has left. Deb is horrified. ‘Oh, how could you do that? You have burnt yourself dreadfully’ She takes him up to her brother’s room and finds salves and bandages to deal with the back of his hands which are ‘badly scorched.’ Then ‘she pulled open one of the drawers in the dressing-table, found a pair of lace ruffles in it, and began swiftly to tack these on to the sleeves of his shirt.’

There is a long oval section around the inside of the elbows which is made up of very narrow pleats. This enables the shirt sleeves to fit inside the fashionably narrow coat sleeves and allow the wearer’s elbows to bend.

The linen drawers of the same date are cut like breeches and they don’t look very comfortable to me. Perhaps the original owner was more corpulent than the model. The drawers end just below the knee and the ties hanging down secure the stockings. 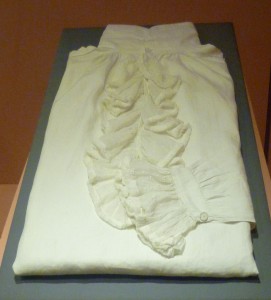 The second shirt is displayed with the ruffles attached. These are made of embroidered muslin, easily washable and stitched on by hand. The shirt itself was always hidden by the waistcoat, which was either plain or embroidered as fashion dictated. However, waistcoats could also be worn for warmth, witness Colonel Brandon’s flannel waistcoat in Jane Austen’s Sense and Sensibility. Flannel was a loose woollen weave and thus warm.

Elinor: ‘But I must object to your condemning Colonel Brandon … to the constant confinement of a sick chamber, merely because he chanced to complain yesterday (a very cold damp day) of a slight rheumatic feel in one of his shoulders.’

‘But he talked of flannel waistcoats,’ said Marianne, ‘and with me a flannel waistcoat is inevitably connected with aches, cramps, rheumatisms, and every species of ailment that can afflict the old and the feeble.’

Man’s dressing-gown, 1840 – but similar ones were worn from the early 19th century

I was interested to see a man’s dressing-gown displayed – usually, humble domestic garments tend not to survive. The one illustrated is made of printed cotton and lined with cotton. The Regency man’s dressing-gown was perfectly acceptable as informal wear at home; it was not confined to the bedroom. 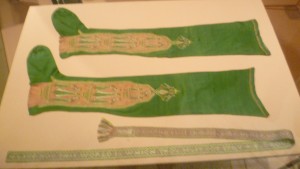 This magnificent pair of silk stockings from the mid-18th century are obviously meant to be seen. Knee breeches were still fashionable in the Regency for everyday wear, though by the 1830s they would be seen as old-fashioned.

Stockings were secured by garters secured either above or below the knee with a button or ties – the elasticity of india-rubber was not available until the 1830s. These stockings look as though they have been embroidered with a special recipient in mind.

I asked a friend for his take on the French translation of the words embroidered on the garters. This is what he said:

The lower one (UNIS A JAMAIS) is straightforward and means ‘together forever’. The one above (JE MEURS OU ATTACHE) is more fun. Whoever sewed this was not using accents so ‘ou’ could be ‘where’ or ‘or’. In addition, it is clear that there are letters before ‘attache’. The meaning could be ‘If I don’t join you, I shall die’ or ‘Where I am joined, there shall I die’. Of course, the ambiguity may be deliberate.

All photos taken by  the author

14 thoughts on “The Regency Buck – undressed.”