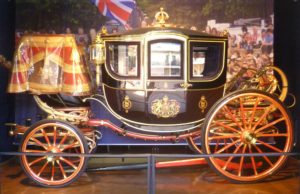 According to the O.E.D., the word ‘landau’ dates from 1743 and comes from Landau in Germany where this four-wheeled carriage was first made. It’s basically a city carriage as opposed to a country one, and its top has two sections so that it can be either half or fully opened. It looks a bit like an old-fashioned perambulator. I used to pronounce ‘landau’ as if it were German (which it was, originally) with the ‘au’ bit rhyming with ‘Frau’, but its correct pronunciation is landor. 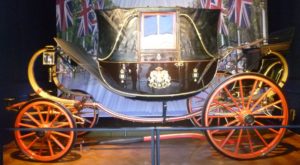 The semi-state landau is an ideal carriage for royalty because its front and rear seats face each other and when its two-way folding roof top is down, all four occupants of the landau can be seen clearly by the public. 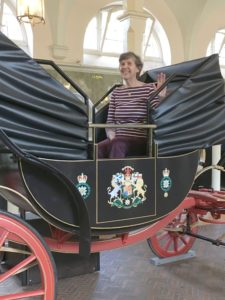 Here I am, sitting in a replica Semi-State Landau, waving regally.

If you want to sit in one yourself, there is a replica Semi-State Landau in the RoyaLMews stable block where you can do just that. It’s certainly comfortable to sit in but it’s probably not so much fun when moving as it moves from side to side as well as up and down.

A State Landau looks much the same as the semi-state but is more decorated. The 1902 State Landau which carried the Duke and Duchess of Cambridge back from Westminster Abbey to Buckingham Palace after their wedding, is upholstered in crimson satin and richly ornamented in gold leaf; it has four candle-lit lanterns and is drawn by four Windsor Grey postillion horses, that is, it’s driven by a postillion rider, of which more in a moment. 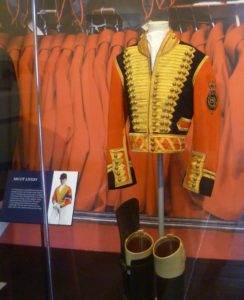 The postillion’s state livery comprises a scarlet and gold jacket and a wig and cap. The jackets may change – they also have semi-state livery, Ascot livery and everyday dress – but they always wear white breeches and top boots.

The State Landau which carried the Duke and Duchess of Cambridge back to Buckingham Palace after their wedding in Westminster Abbey, had both roof hoods open so that the Duke and Duchess could be clearly seen from three sides. However, two footmen, looking magnificent in their red and gold coats, their white-gloved hands resting on their knees, sat behind the Duke and Duchess, presumably for security reasons, and obscured the view from the rear. 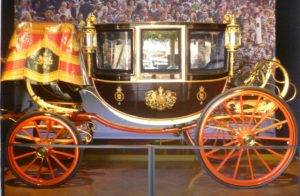 The Glass Coach, above, was bought for King George V’s coronation in 1911. It is a particularly comfortable coach with excellent suspension, which must be a relief – not all of the royal coaches are so comfortable. Traditionally, it is the coach in that royal brides travel in to their weddings, including Lady Elizabeth Bowes-Lyon in 1923; Princess Elizabeth in 1947; Princess Anne in 1973; and Lady Diana Spencer in 1981. At least they didn’t arrive at the church door feeling sick. 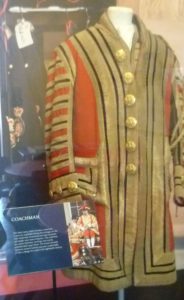 You can see that there is a box richly draped with a ‘hammer cloth’ at the front for the coachman of the Glass Coach to drive the horses. His state livery is the gold and scarlet frock coat shown above. He also wears scarlet plush knee breeches, pink silk stockings, and gold-buckled shoes, not to mention a wig and a wonderful tricorne hat with ostrich feathers. There is no seat at the back of the coach for the footmen; they have to stand – though they do get to wear rather amazing hats which makes them look as if they’ve just returned from the Marlborough wars. Their job is to open the door and let down the steps for the occupants. 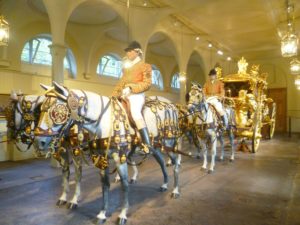 So let’s look at the difference between a carriage being being ‘postillion driven’ and ‘coachman driven’.

The Gold Coach, the one used in the coronation; is postillion driven. The postilion rides the leading nearside horse of a team or pair and it is he who drives the carriage from the saddle. The Gold Coach actually needs eight horses to pull it, so each pair of horses will have a postillion riding the nearside horse. The nearside is the pavement side so, in effect, postilion–driven coaches have a right-hand drive.

Most of the royal coaches can be either postillion-driven, or coachman-driven. The coachman’s box is removable. If there is a royal event where it’s important that the occupants are seen, then the coach’s box will be removed and the coach will be postillion-driven.

But what about lower down in society? I wanted to know more about Mrs Elton’s sister’s barouche-landau in Jane Austen’s Emma? A barouche-landau  combined the best features of a landau and a barouche. Like a landau, it was a four-wheeled light-weight convertible carriage on elliptical springs, with a two-way folding top. It was a comfortable vehicle and the front and back seats faced each other. 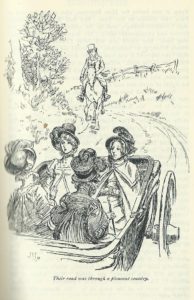 ‘There road was through a pleasant country.’ Mansfield Park.

However, unlike a landau, it had no rear platform for footmen at the back – useful, if you didn’t want servants to overhear the titbit of scandal you were longing to discuss. Instead, it had a raised barouche box at the front for storage, on top of which were two seats, one for the driver with the other seat spare. Readers of Mansfield Park will remember Julia Bertram’s joy at being directed by Mrs Grant to sit up on the barouche box, next to the driver, the attractive Henry Crawford, on the way to Sotherton.

We can see poor, jealous Maria Bertram seated in one of the facing seats in the illustration above. She cannot hear what Henry and Julia are saying, all she can see is their backs – and they are both plainly enjoying themselves.

And, at the end of Persuasion, Captain Wentworth buys Anne ‘a very pretty landaulette’ but what, exactly was it? 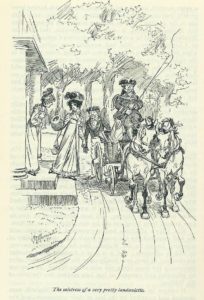 ‘Mistress of a very pretty landaulette’

A landaulette is a small, two seater landau. The captain has given his new wife a very generous present. Because it needed a coachman to drive it, the landaulette was seen as a luxury vehicle, and thus taxable. Furthermore, the cost of paying the coachman, together with the stabling for the horse, would have been expensive. The gift demonstrates the Captain’s care for both Anne’s independence and her safety.

If you’d like to know more about the Coronation coach, have a look at my post;  http://elizabethhawksley.com/the-coronation-gold-state-coach

4 thoughts on “The Royal Mews: Coaches and Landaus”