What is the Supreme Court? Where is it? What does it do? I have to confess that, until last Thursday, I had only the haziest idea. I knew it was the highest court in the land and I assumed it was somewhere near the Royal Courts of Justice. I felt I ought to know; after all, what the Supreme Court decides affects us all. So I booked in for a tour…. 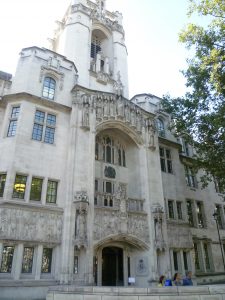 Middlesex Guildhall: this is where it now is, opposite Westminster Abbey

I need to start with a bit of background. Please bear with me. 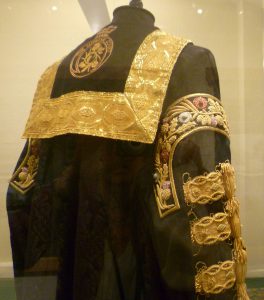 Detail on a Justice’s ceremonial robe, 2009. Nowadays, they only wear it on ceremonial occasions

The Constitutional Reform Act recognized that law and politics must be seen to be separate, and so the Supreme Court was set up in 2009. It took on the judicial functions which had previously been assumed by the Law Lords, now called Justices, who were appointed by an independent select commission who aimed for a balance of Justices with varied experiences of the law from across the U.K. 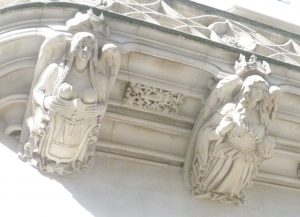 Middlesex Court exterior: corbels with angels representing Justice (with scales) and Power (with orb and sceptre)

At the moment, the twelve Justices are all white and only one is female. All the men were privately educated so, plainly, there’s still a long way to go. To be fair, this is partly because of their age. When Lady Hale, the Deputy President, went to Cambridge to read law (from her State school), there were only three colleges for women to twenty-one for men. At least educational opportunities are now more equal for future Justices.

The new Supreme Court couldn’t remain in the House of Lords (who were pushed for space, anyway) so it moved to the Middlesex Guildhall in Parliament Square, opposite Westminster Abbey. 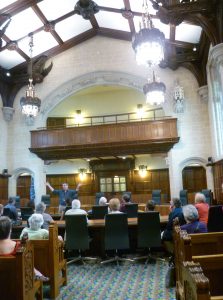 The Middlesex Guildhall has always been associated with the law. First built in 1805, it was completely rebuilt as a court house by James Gibson in a Neo-Gothic style (1912-1913). It had eight courtrooms, together with cells and jury rooms. A massive restoration was needed to make it fit for purpose as the Supreme Court. It now has three courts and an important three-tier library, as well as offices, a public café and an exhibition centre. 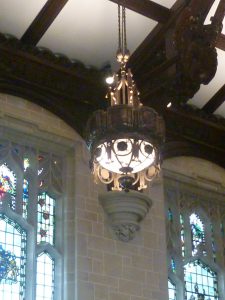 The lay out of Court Room 1 reflects its function. This is no traditional court room with a dock, witness stand, seats for the jury, or presiding judge. The Supreme Court’s role doesn’t need any of these things. Its function is to interpret the law where it isn’t clear; or to set aside obsolete precedents. For example, a recent judgement looked at whether Parliamentary privilege covered MPs not having to explain their expenses. It had to examine what ‘Parliamentary privilege’ originally covered and decide whether 21st century expense claims came within that definition. Fortunately for democracy, they decided that they didn’t. 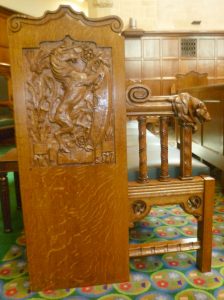 At the back of the room there are eight seats for Judicial Assistants. An extra seat on the left is for the Usher who prepares the room and makes sure that everyone arrives on time. The Registrar has a chair on the right.

In front of them are nine Justices’ seats is a semi-circle. Most cases have five Justices and take two days, but there can be seven or nine Justices, depending on the case’s complexity. Odd numbers ensures a majority vote. 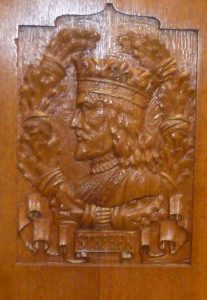 Facing them are six advocates’ seats. There is no prosecution and defendant. Instead the appellant sets out a legal argument; the respondent offers a counter argument, to which the appellant can then reply. The Justices listen, consider and discuss. This is not about guilt or innocence; it is about interpretation, and the room is arranged, not for confrontation, but to support discussion and learned debate. 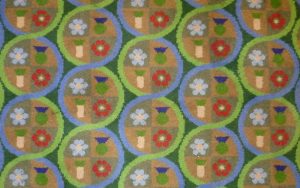 The carpet throughout the building was designed by Peter Blake, who designed the cover for the Beatles’ album, Sergeant Pepper’s Lonely Hearts Club Band

Behind the advocates’ seats are eleven seats for their clients and assistants. And, lastly, there is seating (on uncomfortable benches) for about twenty-four members of the public. All cases are routinely filmed and available to watch online. Transparency is crucial. 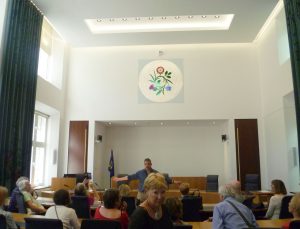 Court Room 2 is modern and smaller. The roundel on the wall shows the Tudor rose of England, the thistle of Scotland, the blue flax flower, representing Northern Ireland, and the fan of leek leaves represents Wales. The whole is surrounded by an omega – Ω – the last letter in the Greek alphabet, symbolizing that the Supreme Court is the final court. 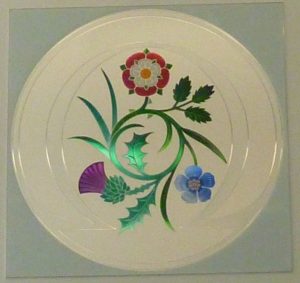 The last room on show to visitors is the Library for legal research. In many respects, this is the star of the show. It is on three levels. 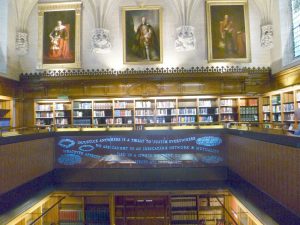 Entering the Library: this is what you see coming in

The engraved characters in blue read: Injustice anywhere is a threat to justice everywhere. There are other quotations, including ones from the Roman lawyer and statesman, Cicero, and the Bible. 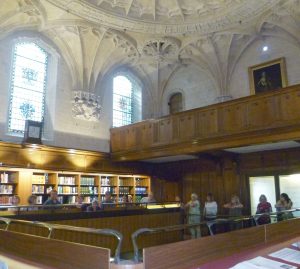 Looking across the Library

I liked the impressively carved ceiling and the stained glass coats of arms in the windows. This is a room which is eager to display its historic credentials and emphasize its learning. 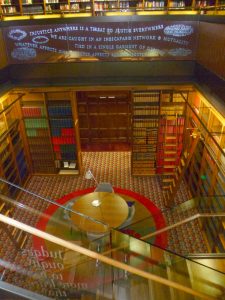 Looking down into the Library’s lower floor

There are further bookshelves below. Note the sliding step ladders to reach books on the high shelves. 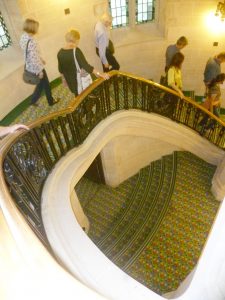 Going down the Stairs

The tour took us upstairs and downstairs and, going down, I paused to admire the staircase and the shape it made, though I have to say I don’t care much for the carpet (see photo higher up). It seems more suitable for a children’s book illustration than for the highest court in the land. 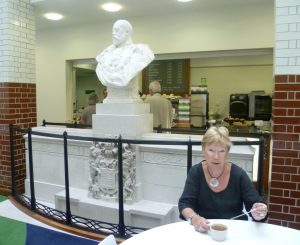 The café is situated in the basement in a light well which gives it a feeling of light and openness. I was rather amused by the large bust of King Edward VII with King and Emperor engraved on the stone plinth standing right in front of where you queue up for coffee. It had the faint look of an altar with the railing in front. A rather incongruous place to put it, I thought.

However, the coffee was very welcome.

I enjoyed my visit and I learnt a lot. The Supreme Court opens to the public from 9.30am – 4.30pm, Monday to Friday, except for Bank Holidays. The guided tour is well worth doing. www.supremecourt.uk

8 thoughts on “The Supreme Court of the United Kingdom”