Recently, I re-visited Westminster Abbey; I hadn’t been there for years – the last time I went, there were few visitors and you were allowed to go wherever you wanted. What I remembered was the soaring Gothic architecture and the wonderful fan vaulting of the ceiling. I loved St Edward’s shrine and the various chapels of the early English kings and queens; and I was able to wander round and enjoy the peaceful atmosphere of 800 years of prayer, largely uninterrupted. 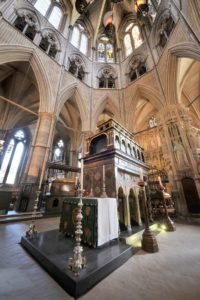 My visit this time was a very different experience. I arrived early but the abbey was already full. It wasn’t exactly noisy, for everyone had audio guides, but that aura of peace had disappeared. It was impossible to stand back and look at something properly because people kept interrupting my view. And in Poets’ Corner, I couldn’t find the stone commemorating the poet I was looking for because someone was standing on it. 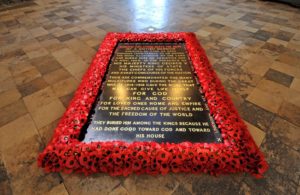 The Tomb of the Unknown Warrior

Fortunately, the tomb of the unknown warrior is still as moving as it always was. There’s something about the simplicity of the words engraved on it which, unlike many of the other funeral monuments in the abbey, deliberately emphasise the man’s anonymity. Neither his rank nor his status is important; he is, as we all are, just a human being, and, therefore, he can represent Everyman.

BENEATH THIS STONE RESTS THE BODY
OF A BRITISH WARRIOR
UNKNOWN BY NAME OR RANK
BROUGHT FROM FRANCE TO LIE AMONG
THE MOST ILLUSTRIOUS OF THE LAND
AND BURIED HERE ON ARMISTICE DAY
11 NOV: 1920, IN THE PRESENCE OF
HIS MAJESTY KING GEORGE V
HIS MINISTERS OF STATE
THE CHIEFS OF HIS FORCES
AND A VAST CONCOURSE OF THE NATION

This visit, though, it wasn’t the architecture that caught my eye, it was the huge number of grandiose marble monuments thrusting themselves forward along the aisles and transepts and down the nave. No modesty for them! Here putti and angels recline on clouds; the goddess Minerva looks up at a dead hero; four armoured knights kneel around a tomb; Classical muses mourn (whatever are they doing in an abbey?); and there are yards of marble drapery everywhere. It is ostentatious to a degree. 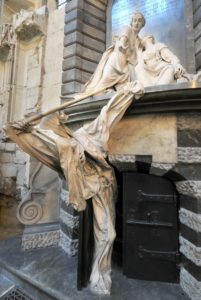 Having said that, I make an exception for the above monument which has to be one of the most dramatic in the Abbey; The skeletal figure of Death is aiming a lance at Lady Elizabeth which her husband gallantly tries to intercept. It might well be described as way over the top but its sheer chutzpah redeems it. I like it.

However, in general, I agree with Nikolaus Pevsner’s comment: ‘It is sheer perversity to deny that the monuments lessen the impact of the architecture.’ Not only is the abbey’s architecture dwarfed by the volume and size of the marble figures but, frequently, the background of the sculptures crawls up the wall and cuts out the light from the windows. 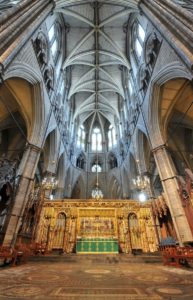 The other thing which struck me was how obscure most of the subjects of all this ostentatious mourning are to a 21st century viewer. Doubtless the various earls and dukes were important in their day, but now, I couldn’t help feeling, they were surely superfluous to requirements. And the small, obscure memorial to Jane Austen, tucked away in Poet’s Corner, only emphasizes the topsy-turvy values of the majority of the abbey’s memorials, where status and size is of overarching importance.

However, this visit, what I’d really come to see was the new Queen’s Diamond Jubilee Galleries, and I was glad to escape from the bustle of the ground floor and take the lift up seven storeys to the 13th century Triforium. And I have to say these new galleries are wonderful. 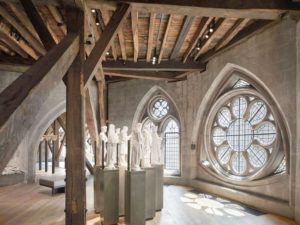 Windows in the Triforium. In the centre are the maquettes for the statues of the modern Christian Martyrs from the Abbey West Front.

There is an atmosphere of peace and calm here  and it isn’t over-crowded. The new galleries’ space is beautifully designed to allow in natural light but, at the same time, shield the often delicate objects from harmful direct sunlight.

There is a stupendous view looking down a vertiginous 52 feet to the sanctuary, quire and the nave. I am a Cosmati fan (I discovered the Cosmati brothers’ work when I was in Italy) and I loved being able to look down on part of the Cosmati floor and the dramatic black and white lozenge tiles in the quire from above. 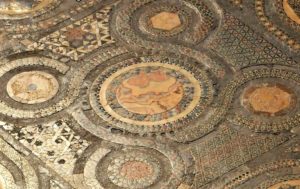 Detail of the Cosmati pavement.

I particularly wanted to see the funeral effigies, mainly of English kings and queens, from the early 14th century to the seventeenth.  Originally, the effigy of the deceased monarch, wearing his (or her) clothes, with perhaps his sword or helmet, was placed on top of the coffin and carried in the funeral procession. 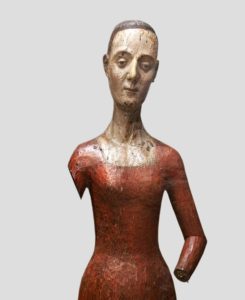 The funeral effigy of Catherine de Valois, queen of Henry V, dating from 1437, is one of the earliest It is made of painted wood. Originally, it would have been dressed in her clothes, and given a wig and possibly a crown. This is the nearest we can get to what she looked like: small, and with a thin face.

Interestingly, the gallery also has some of the funeral achievements belonging to her husband, Henry V: his helmet, and the saddle he may have used at the battle of Agincourt in 1415. Usually, the pieces of armour would then be hung up above their owner’s tomb, as the Black Prince’s helmet and chain mail used to hang over his tomb in Canterbury Cathedral. 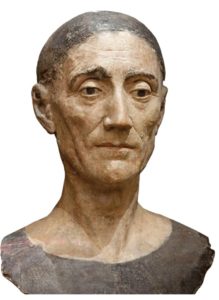 The effigy which is undoubtedly the most life-like is that of King Henry VII, dating from 1509, which may be modelled on Henry’s death mask. The Florentine sculptor, Pietro Torrigiano, was invited to England to make the magnificent tomb of Henry VII and his queen, Elizabeth of York. The effigy is obviously of the same man. 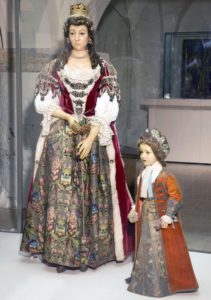 Effigies of Catherine, Duchess of Buckingham and her son

Two of the most interesting effigies are those of Catherine Sheffield, Duchess of Buckingham who was the illegitimate daughter of King James II, and thus half-sister to Queen Mary II and Queen Anne; and her three-year-old son, Robert, dating from 1735. The wax features of both mother and child are particularly fine. Their clothes are thought to be their own; Catherine also wears her undergarments as well as her brocaded silk underskirt; and Robert’s silk coat and velvet robe have little slits at the back for leading reins, a poignant reminder of how young he was. 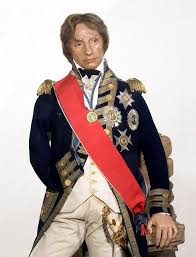 There are also effigies of national heroes, such as Lord Nelson, and the effigy above was made by Catherine Andras, a well-known wax modeller. He, too, wears some of his own clothes, such as his coat. Nelson’s mistress, Emma Hamilton, declared it to be an excellent likeness  – or it would be ‘if a certain lock of hair was disposed in the way his lordship always wore it.’ She was allowed to make the alteration. His hat (genuine) is displayed beside him. 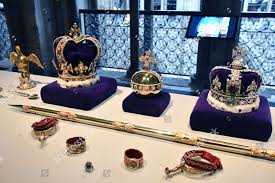 Replicas of the regalia

I was also interested to see the replicas of all the regalia used at the coronation. They were made for the coronation of King George VI, to be used for rehearsals, and then kept for display. They comprise a lot of objects, including two crowns – St Edward’s crown which has 444 semi-precious stones in a solid gold frame and is extremely heavy which is worn only for the actual crowning; the other crown, the Imperial State Crown is lighter, and it worn for the procession out of the abbey. Naturally, the stones etc. in the replicas are not real, but the weight is the same as the real objects. Then there is the sceptre, the orb and ampulla (small containers for the holy oil), the staff, spurs and armills (sort of bracelets). Some of these were worn or carried by nobles to represent kingship and royal dignity.

I can quite understand that a coronation needs a rehearsal with proper replica regalia so that the new monarch knows what to hold in which hand and how heavy or unwieldy it is. It wouldn’t do to drop the orb.

I particularly liked the sense of space in the Triforium galleries. The objects were well chosen and well-displayed. For example, there were some interesting books and documents which, alas, don’t photograph well for a blog as the detail is too small.

I can see that Westminster Abbey needs all the income it can get from visitors; a building of that age must be always be in need of expensive maintenance, but, for me, alas, the visit to the ground floor of the abbey was not a particularly pleasurable experience. However, the visit to the Diamond Jubilee Galleries was well worth the extra cost and I heartily recommend it.

Photos: Courtesy of the Dean and Chapter of Westminster Abbey.