Last week I visited the splendid global headquarters of the Institution of Civil Engineering (ICE) at 1, Great George Street, just off Parliament Square and within a stone’s throw of the Houses of Parliament, Westminster Abbey and the Royal Courts of Justice. It is a huge Grade II listed building, designed by James Miller RSA, and built between 1910-1913, an era of huge (if unknowingly teetering on the cusp of collapse) Imperial self-confidence. There it stands in all its Imperial glory; a ‘monumental neo-classical design’ in Portland stone, and I have to say that it is extremely impressive – both outside and in. 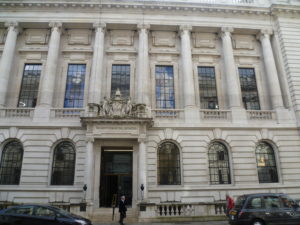 The Institution of Civil Engineering (ICE)

Even the door furniture is grand. 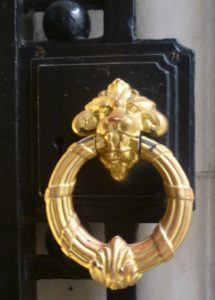 Door handle: some sort of animal (a lion, perhaps?) has the ring in its mouth and eyes that glare at you

The very building celebrates the importance of what it does. A plaque on the wall outside gives us the scope of what Civil Engineering deals with: Land, Maritime, Air and Space, Water, Buildings, Energy. In other words, practically everything our modern industrial age needs to function properly, from housing, roads, and water management, to sewage, clean air, and energy. ICE is well aware that, with Climate Change, there are huge new challenges ahead, and the impression the visitor gets is that ICE is facing them head on. 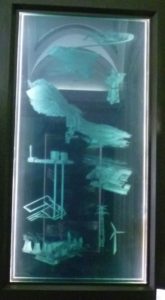 Some beautiful modern engraved glass panels decorate the walls going up to the door. The photo above is of Energy. At the bottom left of the panel, gas cooling towers represent 20th century forms of energy. Next to it is an electricity pylon from the 1930s, which, in its time, was cutting edge technology. On the right of the pylon is a wind turbine from a wind farm. At the top of the panel, a leaping dolphin represents the importance of a healthy marine environment. 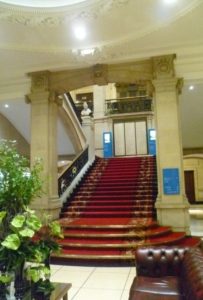 The view from the sofa towards the staircase

Entering the building, the huge entrance hall manages to be both imposing and friendly, probably thanks to some comfortable leather sofas, which aren’t just there for show. People are sitting on them and chatting. Some large plants in pots add a welcome splash of green. 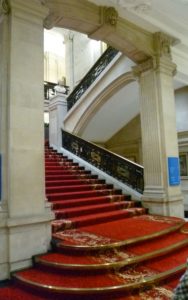 The staircase sweeping down

I was not at all surprised to learn that, since 1989, ICE has been available for public events. It is now a popular wedding venue and you can see why. A grand staircase with a red carpet sweeps down from the first floor and spreads out like a royal Coronation train onto the entrance hall floor. From the entrance hall it offers what is almost a processional route up to the first floor landing where an elegant oculus above allows light to flood in.

What bride wouldn’t want to sweep up that staircase, her veil gliding behind her? 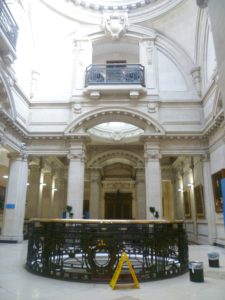 The first floor landing, equally impressive, leads to the Grand Hall, the Library and the Telford Lecture Theatre

The pièce de résistance has to be Great Hall on the first floor with its exquisitely carved plaster work, huge marble pilasters, an impressive painting on the ceiling commemorating the First World War, and a spectacular chandelier. 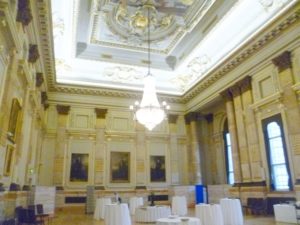 The Grand Hall – getting ready for an evening event

It’s difficult to know what the look at first in the Great Hall. I hope the photo conveys something of its grandeur. There are a number of small but high round tables, each covered with a white tablecloth; soon, these will be covered with nibbles for the event which will take take place in the evening. 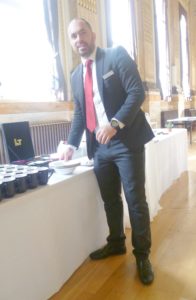 Costin Marin checking that everything is in order

Costin Marin is in charge here and he kindly allowed me to photograph him checking that everything was in order- which, of course, it was. 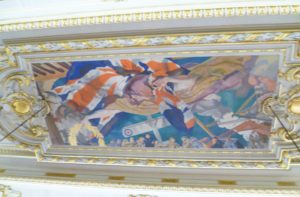 The ceiling painting surrounded by elaborate plaster work is by Charles Sims and depicts a flying female figure, with her brownish Greek-style robe swirling around her, bearing down diagonally across the canvas. In one hand she holds a giant Union Jack, billowing in the wind, and in the other a wreath of laurel. She is Renown. At the bottom of the painting, tiny figures of men and women dressed in uniforms of the different military services peer up at her. Above them you can see the wing of a biplane displaying a red, white and blue roundel on the wing.

I have to be honest and say that I peered at the painting for a long time before I could work out what was going on.

Every year, ICE puts on an exhibition in the library; aimed mainly at children and school parties but there is also much to interest adults. This year the subject is: Water – From Source to Tap. Carol Morgan, the archivist, welcomed us and told us what the exhibition had to offer.  I have Carol to thank for various helpful pieces of advice with regard to this blog. 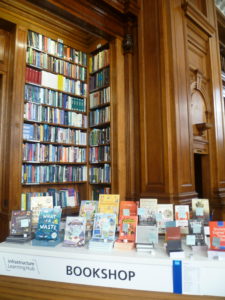 Library: children’s bookshop for the exhibition

ICE knows exactly how to interest children with the story of the huge fatberg found in the London sewers in 1917 which completely blocked part of the sewer – with seriously unpleasant results for the houses above. The exhibition shows what it was made of (fat and cooking oil), why it was there and how the Civil Engineers got rid of it. It was as hard as concrete and took the engineers two months to break it up. 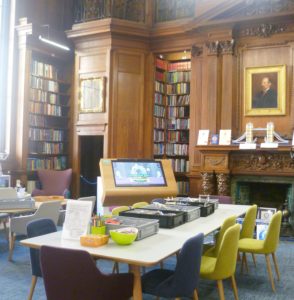 Library: the activity zone for children

The exhibition also had some helpful advice for visitors on what to do to ensure that London’s sewers don’t get another fatberg blocking up the system: let unwanted cooking fat and cooking oil solidify and then put it in the bin with the non-recyclable rubbish. ICE’s slogan: Bin it. Don’t block it. 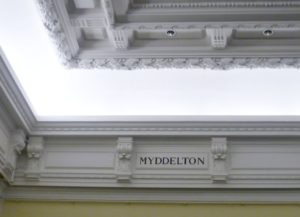 The other room on the first floor, immediately opposite the library is the Telford Theatre lecture hall. One of the things I particularly like about ICE is that they are, rightly, very proud of the work that Civil Engineers do and have done over the centuries. Their names are engraved everywhere and all of ICE’s past presidents have their portraits on show. My local hero, Sir Hugh Myddelton, who brought clean water to London from Islington, then a small village some miles away, in the early 17th century, has his name engraved in large letters in the Telford Theatre – and quite right, too. 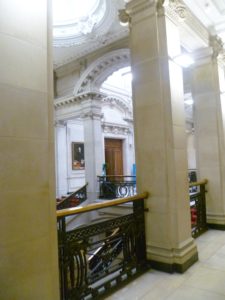 View on the first floor landing looking down at the stairs and up at the oculus, top left hand corner.

The Institution of Civil Engineers is open to the public Monday – Friday 10.00-17.00. It is closed at weekends and public holidays. Admission to the exhibition is free. It is well worth a visit. www.ice.org.uk

4 thoughts on “Why I love Civil Engineering”