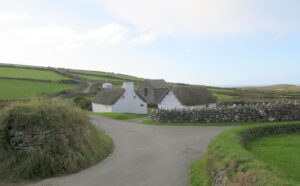 The fact that the village has survived more or less in its entirety is largely due to one of its inhabitants, Harry Kelly (1852-1935), whose parents and grand-parents had also lived in the cottage and kept to the old ways. Kelly was a bachelor and, after his death, his family gifted the cottage and its contents to Manx National Heritage, and most of the village was opened to the public in 1938 as the first Open Air Museum in Europe. 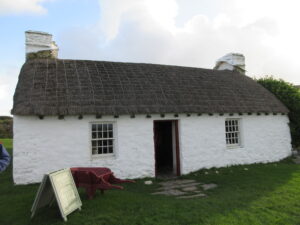 There was, of course, no electricity, and the cottage walls were whitewashed every year to reflect as much light as possible. It was a chilly October day when we visited but the house was warm. The fire on the stone floor of the fireplace was either dried turf or peat and, even though it looked scarcely alight, it gave off quite a heat. The floor of the rooms was beaten earth. My mother once owned a cottage in the Scottish Highlands with a beaten earth floor; I’d imagined that it would get muddy but no, it was rock hard and shiny – like black lino. 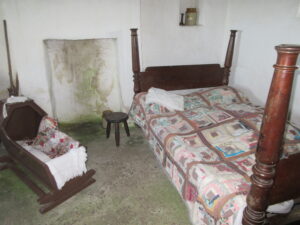 The bedroom on the ground floor

Harry bought the four poster bed as a statement of how well he was doing in the world but, alas, the posts were too tall to fit into the low-ceilinged room and he had to cut them down to size. Note the traditional quilted counterpane made by the women of the family. The baby’s cradle also has a small quilted coverlet. 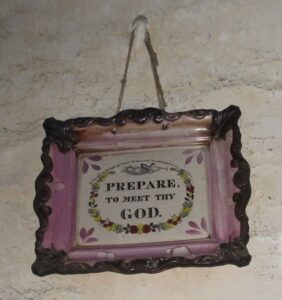 ‘Prepare to meet thy God’

Note the warning plaque hung on the wall; I can’t help feeling it would give one nightmares rather than sweet dreams. 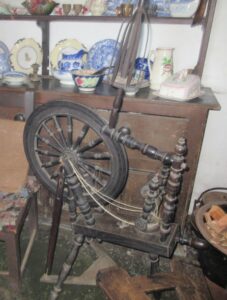 The crowded dresser holds many household objects and a well-used spinning wheel sits on the floor.

The main living room was chock-a-block full of stuff. The dresser took pride of place and we can see it was crowded with everyday things: jugs, plates, egg cups and so on. Molly, our guide to the cottage, explained that a crowded dresser also represented financial security for the family – in hard times some of the items could be sold. The spinning wheel sits on the floor in front of the dresser – and was much used. 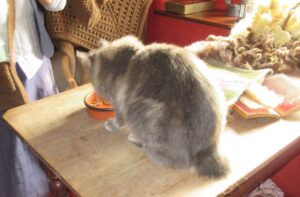 A very fluffy Manx kitten, only 6 months old, sits on the table

The cat was actually only 25% Manx, the rest of it – and it looked enormous – was a Norwegian Forest cat. The Manx cats’ short tail is caused by a genetic mutation and they have powerful back legs to compensate for the loss of the tail which may help with their balance. Research has shown that having a stubby tail can cause various medical problems and Manx cats can develop a number of spinal conditions; their life span is quite short. Opinions differ as to what should be done: leave them to become naturally extinct or fight to preserve them as a special breed. 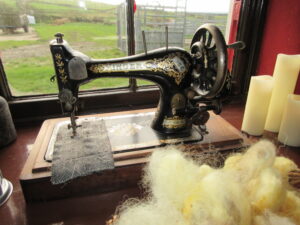 On the table behind the cat was a sewing machine very similar to my own – made in about 1900. It has a long spindle – like mine – and it looks as though it works in a similar way. Having said that, it’s not threaded up ready for action. But the cottage sewing-machine is definitely a Singer, which mine is not. See my blog: http://elizabethhawksley.com/my-vintage-sewing-machine/ 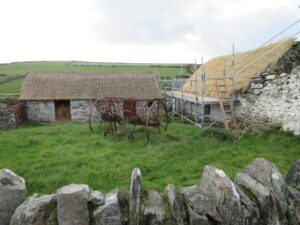 Karren Farmstead  – note that some of the thatch is being replaced. This is an ongoing job.

There are a number of volunteers at Cregneash who keep the village in good working order and we met a couple of gardeners who were busy tidying things up for winter. 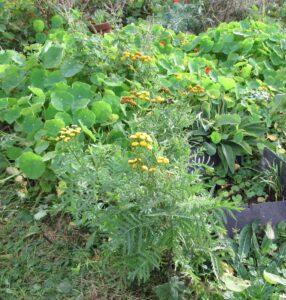 Tansy: an aromatic herb, related to the chrysanthemum.

In the garden they were working on, I spotted a tansy, a wayside herb whose country name is ‘fairy buttons’ and you can see why. Its herbal use was as an insect repellent. I once saw a TV programme about tansy beetles which feed only on tansies. They resemble a rose beetle, an iridescent metallic green – but they are slimmer. I’ve always wanted to see one for myself, but I couldn’t help thinking that I was unlikely to find a tansy beetle on just one tansy plant – and I didn’t – I shall keep looking. 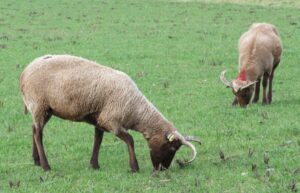 Cregneash also breeds Loughtan sheep – a primitive breed, found only on the Isle of Man. Like the Hebridean Soay sheep, they are the nearest we can get to Prehistoric sheep and they were kept for both their meat and their wool. Their lambs are born black and gradually become a sort of dark buttery colour.

Molly, in Harry Kelly’s cottage, had crocheted a Loughtan sheep’s wool shawl, and I asked her if I might touch it. It felt like a thick, rather coarse wool; it might be warm but you couldn’t snuggle into it. 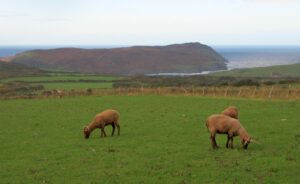 We visited Cregneash on a showery late October day and there are some spectacular views. I’d love to revisit it in on a warm spring day.