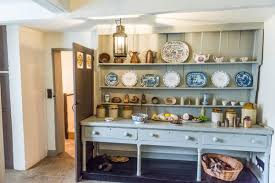 For example, the photo above shows the tradesman’s entrance door to the kitchen in Keats House; they would be allowed no further into the house – at least, in theory!  There was usually a stone flagged floor, and a Welsh Dresser – Keats’s house has its original one. Note the cat basket underneath – a cat was essential for pest control.

The top shelf of the dresser has a coffee pot and a lidded hot water jug, a selection of other jugs and a gravy boat. There are a number of large plates along the second ledge, and, on the bottom shelf, cooking implements that would be needed every day, like the pestle and mortar, earthenware containers for sugar, flour, salt and so on. 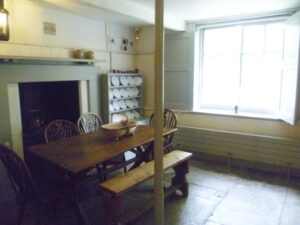 The photo above shows the kitchen from a slightly different angle with an oak table, four Windsor chairs and a bench – you could sit six people here; the stone-flagged floor is clearly seen.  Note a servants’ bell on the wall above the plate rack for ‘them upstairs’ to summon one of the servants. There is a small closed kitchen range with a small oven, a hot water container with a tap, and a top on which you could heat up a kettle – but these are late 19th to mid-20th century. 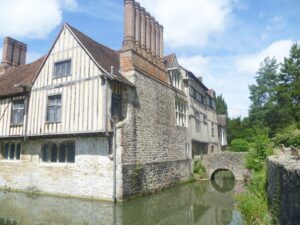 I’m now moving to Ightham Mote in Kent; this is a much bigger house; originally it was a mediaeval moated manor house, as you can see from the photo. The house was continually lived in until 1985, so the kitchen, whilst old-fashioned, dates from the 19th-20th centuries 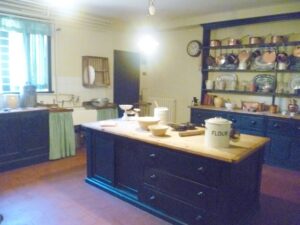 The Ightham Mote kitchen is obviously from a much posher house. The essential dresser stands against the wall and it, too, has copper utensils, a pestle and mortar, large plates, glass containers and so on.  There is a large wooden island on the stone slabs on the floor – interestingly, the ‘island’ was a desirable must have piece of furniture back in the 19th century, too; we can see from the objects on the island: scales, bowls, flour and a rolling pin, that someone is about to bake.

There is a wooden plate rack on the wall and the sink has both hot and cold water taps which indicates that it’s early 20th century rather than 19th century. And the floor looks as if it’s tiled, rather than having flagstones. Tiles are more easily cleaned and look much neater. (I did wonder if it had wooden floorboards, but then I thought of a possible fire risk, not to mention mice, and decided that it was probably tiled.) 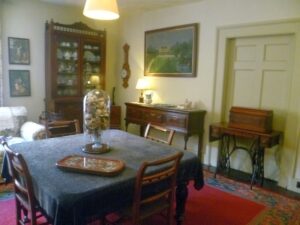 ‘The Housekeeper’ according to Mrs Beeton’s Book of Household Management (1861) ‘must consider herself as the immediate representative of her mistress.’ It was her job to liaise with the cook and the butler, to keep the accounts, and to understand what each servant’s job entailed and then, of course, to make sure that the various maids did their tasks properly.

The housekeeper’s room was for the exclusive use of the housekeeper, the butler, the lady’s maid and the gentleman’s valet; they ate there and were waited on by the still room maid. Class divisions were strictly observed, even among the servants. We notice that the room has a proper carpet, decent well-polished furniture, and what looks like a comfortable sofa against the wall. There are ornaments, too, some pictures and a barometer. There is also a treadle sewing machine – which is a 20th century pre-war model. 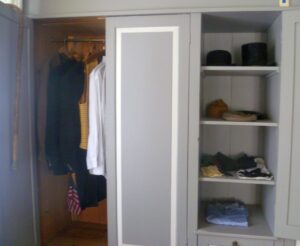 A peep inside a gentleman’s wardrobe

This wardrobe is also at Ightham Mote – probably in the gentleman’s dressing room. It was the valet’s job to look after his master’s clothes. I like the gentleman’s assortments of hats – the 19th century and the first half of the 20th century was a ‘hatty’ age; you had to be very poor to leave the house without a hat; a hat showed that you were respectable. The valet’s master owns a top hat for formal occasions, a wedding, say; a bowler hat for when he goes to work in the City; on the second ledge down we see a flat cap – possibly two –  for casual wear in the country, and a smoking hat (the round one, which may have come from Turkey). He might also own a smoking jacket which he would wear if having an evening with his male friends in the smoking room.

We had a smoking room in my childhood home which held my father’s guns in a locked cupboard; and where he kept his fishing tackle. The smoking room also housed my grandfather’s library with its sets of leather-bound novels by Sir Walter Scott; Richard Jefferies, and Robert Surtees, who was a sporting journalist and wrote a number of comic novels about his hunting-mad Cockney hero, Mr Jorrocks, much enjoyed by my grand-father. It was very much a male room. 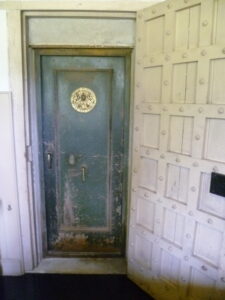 Ightham Mote: the safe is built into the mediaeval wall of the butler’s pantry.

The butler might also sleep in a room off the butler’s pantry. The pantry was where all the silver was kept, (there were floor to ceiling wall cupboards with sliding doors, each with its own key, the length of the wall.) Every week, the butler would clean the silver. 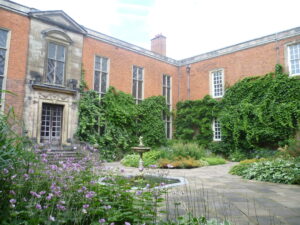 This elegant house has plenty of evidence to show that its owners were anxious to acquire every possible modern convenience. 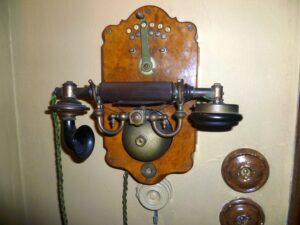 Dunham Massey has a number of early 20th century state of the art labour-saving devices. Take the telephone, if you look carefully you can see how it works – well, you can if you are familiar with a telephone as opposed to a smart phone. In the country house I was brought up in, there was only one telephone –  in the entrance hall. The telephone above, which is in a public corridor, gives me the impression that it’s used for things like ordering something from a large shop – smaller shops wouldn’t have had a telephone. You would be unlikely to use it for a private conversation.

Note the evidence of the owner’s determination to modernise with the brass electric light switches and the electric bell-press to summon a servant. 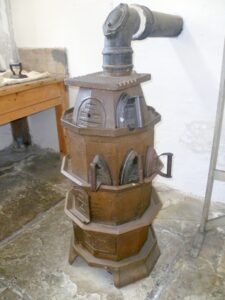 This must surely be a one-off. It’s a tiered cast iron stove with ledges to hold laundry irons – which otherwise would have to be re-heated on the top of a kitchen cooker. If you think of how much laundry there would have been in a stately home with dozens of beds, not to mention all the personal laundry with shirts and chemises  etc. to be ironed, you will see that this labour-saving device was much needed. Electricity didn’t come in, in private houses, until well into the 20th century. 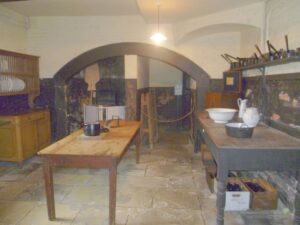 What actually went on in the scullery? The only working scullery I know is the one in my childhood home. It was next to the kitchen and it had a large sink and draining board, and a plate rack on the wall. If Mrs Smith were baking in the kitchen, the washing of used bowls and kitchen utensils would be done by the scullery maid in the scullery. The scullery also had a large washing machine  – it must have been an early one – and there was a mangle, an ironing board, and a large clothes rack with a pulley which could hold sheets etc and was pulled up to the ceiling to dry. There was also a very large fridge.

A door led from the scullery to a small chilly walk-in larder on the north side; beyond that was ‘the holy of holies’, an even colder larder with stone slabs on the floor and marble shelves for home-made jam and pickles – and anything else which needed to be kept cold. The window was tiny, and, a trap-door in the floor led to the ice house which had a drain for melting ice. In winter, alternate layers of snow and straw were packed down until the ice house was full. The trapdoor was replaced and the ice didn’t finally melt until about May. It was very effective.

I don’t personally remember the ice-house being used but Mrs Smith, our cook, told me that it was in use throughout the war, and I’m pretty sure it was used before that during my grandparents’ time.

It’s obvious, looking at the photo above that the Dunham Massey scullery is redundant (the saucepans have obviously been unused for years), and there is little in the room to remind you of its original function. Some wine is stored under a table, and that’s about it.

I often wish I’d had the foresight to go round my childhood home before the house was sold and photograph all the hidden cupboards (one held a bronze 19th century breast and backplate); the boot-room with the old paraffin lamps, stone hot water bottles, carpet sweepers, etc; the hooks on the ceiling in the passage beyond the kitchen which held sides of cured bacon; the bells to summon servants etc.

All photographs are by Elizabeth Hawksley, except the first photograph of Keats House kitchen, courtesy of britain.express.com.

I am delighted that The Hartfield Inheritance is now out in e-books.

10 thoughts on “What the Servants Did”