I just love Cambridge Market – even on a chilly November day, it’s full of wonderful stalls selling practically everything. Yesterday, we ( three of us) I decided to treat ourselves to a day in Cambridge. We met at 10 am at the statue of Sir Nigel Gresley (famous steam locomotive engineer) by the ticket office at King’s Cross station. I was waiting by the statue, when a man came up and gently patted Sir Nigel’s arm before bending down to explain something to the small boy with him, and gesturing towards Sir Nigel. Obviously a train buff. I understood how he felt. I love steam engines myself and, as a child, I used to wave at Sir Nigel’s elegant trains as they flew past, smoke streaming from their funnels. I usually got a ‘toot’ from the engine driver. 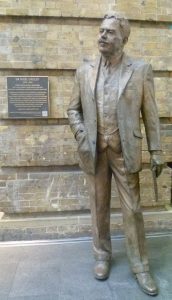 For me, seeing the statue of Sir Nigel Gresley brings back childhood  memories of going somewhere exciting on a train.