My historian brother has the rare gift of giving me books which I never knew I needed and which, if non-fiction, have proved to be invaluable or, if fiction, have almost instantly become one of my favourites. 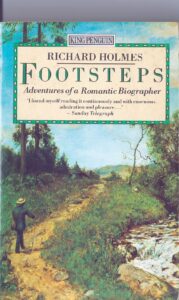 I want to look at some of them today because I think that they all have something special – and I’d like to convince you that they are books that you might like to read yourself.. I’m starting with Richard Holmes’ Footsteps: Adventures of a Romantic Biographer. It’s his first book and it opens with his first literary adventure, when he was 19, retracing Robert Louis Stevenson’s famous journey through the Cevennes with a donkey – though, alas, Holmes had no donkey. Still, he did have a suitably Stevensonian hat, which he christened Le Brun and it helped to break the ice when meeting strangers.

Later, caught up in the Parisian riots of the 1960s, Footsteps dives back in time to look at the terrors the poet William Wordsworth and writer Mary Wollstonecraft had to face when in Revolutionary Paris.

I loved the way that Holmes developed a romantic attachment to Mary Wollstonecraft and imagined himself saving her from ‘some fatal escapade in the Luxembourg prison’ …’Your faithful biographer, Ma’am, come to extricate you in the next paragraph, which has a secret trapdoor …’

In his late twenties, Holmes took another trip following the strange, tortured world of Gerard de Nerval; and finally he went on a pilgrimage through Italy, pursuing the poet Shelley and his band of Romantic Idealists, including Claire Clairmont – with whom he, quite obviously, fell in love.

Holmes was, as he himself said, a child of the 1960s, a period very similar in many ways to the Byron-Shelley set up in Italy with its passionate belief in Free Love and Free Thinking – not to mention the resulting children with pitifully short lives – and, inevitably, the painful emotional fallout. He understood that sort of ménage from the inside.  And this makes his  account of what happened there particularly convincing.

I fully echoed one of the reviewers’ comments: ‘I found myself reading it (the book) continuously and with enormous admiration and pleasure.’  I do so agree; it’s a book I have re-read many times. 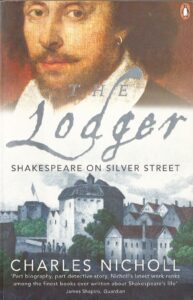 The Lodger: Shakespeare on Silver Street by Charles Nicholl

The Lodger opens in 1612 with William Shakespeare giving evidence to the Court of Requests at Westminster concerning a case that went back to when he was living in Cripplegate eight years earlier. It’s the only time his spoken word was ever recorded and what follows is a sort of detective story about Shakespeare’s time in Silver Street living with a family of French immigrants.

I don’t know how Charles Nicholl does it, but he gives his readers an immensely exciting dissection of life in London at that date; we know exactly where Shakespeare’s house was, (there are contemporary maps) we know what he could see from his window, we meet his landlady. We also meet the people he was working with – like the dodgy brothel-keeper/ playwright, George Wilkins; and, at the end of the book, Nicholl gives us the transcripts of the relevant Belott-Mountjoy papers so that we can follow the case for ourselves. It like time-travelling crossed with being a fly on the wall. I was completely gripped.

If you want to know about everyday life and work in early 17th century London, this book is a must! 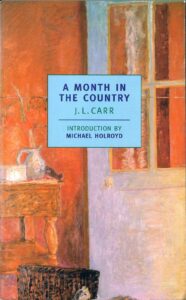 A Month in the Country by J. L .Carr

The cover shown above is from my new copy of J. L. Carr’s book. The original fell apart from having been read and re-read so many times. It’s a slim book of only 135 pages but it stays with you and when my first copy began to shed pages, I couldn’t bear the thought of not having a copy.

The Spectator called this book: ‘Unlike anything else in modern English Literature.’  and I agree. It is a haunting tale: Tom Birkin, a survivor of the First World War, a man deeply traumatized by PTSD finds a temporary job uncovering a wall painting of the Apocalypse in a Medieval church in the Yorkshire village of Oxgodby. I can’t describe it any further – you’ll have to read it for yourself.

The book won the Guardian Fiction Prize in 1980 and was short-listed for the Booker Prize. In 1987, it was made into a film with Kenneth Branagh, Colin Firth and Natasha Richardson.

It is one of my favourite books. 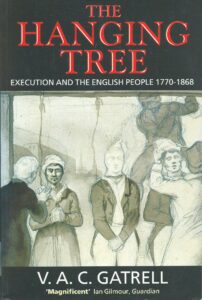 The Hanging Tree by V. A. C. Gatrell

This book explores how English people at all social levels reacted to the awesome spectacle of public execution between 1770-1868. For small crimes as well as grave, over 7000 men and women  were choked painfully to death, watched by crowds in their thousands. What did people feel about these strangulations? What led to the abolition of public executions?’

I’ve read many books about the prison system in the 18th and 19th centuries, but I’ve never read one which gets close to what actually went on. How poor people frantically tried to find someone who would write to the judge, the home secretary, or even the monarch on their behalf to get a royal pardon. How the condemned actually felt and behaved: crying, screaming, urinating, defecating, choking, and the pain and terror the hanging itself caused. You can almost smell it.

Gatrell unearthed thousands and thousands of documents. As he says in the Preface: ‘the tone of these appeals matched my own incredulity at the fates which befell these obscure people and at the slap-happy justice which sent them to scaffolds or exile  for puny as well as casually tried crimes.’

This book won the Whitfield Prize of the Royal Historical Society – and quite right, too. It is a gripping, horrific and moving read. – I can’t imagine anyone who reads it ever forgetting it. Part of what makes it so moving is that the evidence comes from those who suffered, not from those who administered the law. These are voices crying out from the underbelly of society; voices which have been all too rarely heard.

The book, a Christmas present, arrived with a card which read ‘With best wishes for a happy (if not exactly merry) Christmas – with love.’ 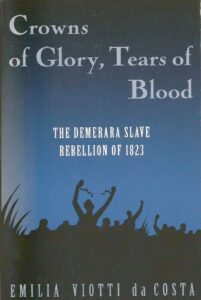 Crowns of Glory, Tears or Blood: The Demerara Slave Rebellion of 1823 by Emilia Viotti de Costa

The book covers, in detail, one of the biggest slave rebellions in the British Empire: the uprising in the British Colony of Demerara (now Guyana) in which nearly 12,000 slaves took up arms against their masters.

One of the book’s reviewers wrote of Emilia Viotti da Costa’s study of the complaints brought by slaves to the office of the Protector of  Slaves and her analysis of the experience of slavery  through the eyes of the Demerara slaves themselves: I know of no other study that goes so searchingly and movingly into the ideological heart of a slave revolt.’

The author draws on eyewitness accounts, official records and private journals.  There are also a number of figures and tables recording the age distribution of slaves; their births and deaths; sugar prices in the British Market and so on.

This book was essential reading when I was writing Frost Fair and it told me things which I hadn’t found anywhere else, like how a slave plantation actually ran: I learnt that, in Demerara, slaves had to build their own houses, and grow their own food. The aged slaves looked after the children, grew the food and cooked the meals. Infant mortality was high, disease was rife and punishments were savage. My copy is full of pencil underlinings and notes in the margins.

It also told me how sugar was processed – in graphic detail: it was dangerous: the temperature needed to turn the sugar cane into sugar was high, and accidents were frequent and horrific.

The Slave Trade itself had been abolished in Britain in 1807 but the  slaves themselves were not freed. As a result of the Demerara uprising, the Anti-Slavery Society was formed in 1823 but it took another ten years before slavery itself was abolished throughout the British Empire.

I don’t normally mention books I’ve used in research in my novels but I made an exception in the case of Emilia Viotti Costa’s Crowns of Glory, Tears of Blood and thanked her. I could not have written Frost Fair without it. 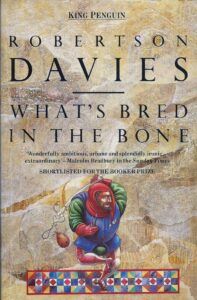 What’s Bred in the Bone by Robertson Davies

As I said, my brother seems to have the gift of giving me exactly the right book. I, alas, don’t have it – though I’ve tried. I have only ever, to my knowledge managed to give him one book which he has devoured, thoroughly enjoyed, and immediately searched out other books by the same author. And that is the book above: Robertson Davies’s What’s Bred in the Bone which is the middle book in his Cornish Trilogy.

It’s impossible to describe a Robertson Davies novel. On the back of the book it says: ‘Encompassing all the glory and madness of heaven and hell, Robertson Davies’s newest masterpiece is thick with Gothic secrets, cosmic furies, sex, love, art and a wicked worldly wit.’

One either thinks ‘Wow! I must read this’ or ‘It sounds like hell!’ 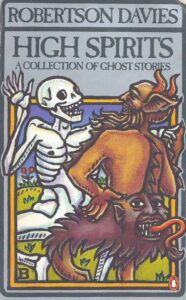 High Spirits: A Collection of Ghost Stories by Robertson Davies

Fortunately, my brother liked it, and a few years later he gave me the book above which I thoroughly enjoyed. I particularly likes Davies’s take on Frankenstein:  The Cat Who Went to Trinity.

Well, there we are; six books you might enjoy.

I am delighted that I now have six of my Elizabeth Hawksley novels out in e-books, the latest of which is Tempting Fortune.