We’ve just past November 30th, St Andrew’s Day, the patron saint of Scotland, so it feels appropriate to celebrate the 19th century transformation of that beautiful country. 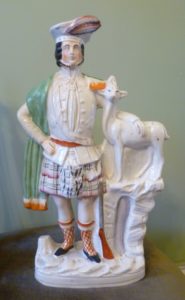 My parents lived in Invernesshire, in the Scottish Highlands, for many years and their house contained a number of things unmistakably inspired by Scotland, one of which was this large flat back Staffordshire figure of a kilted Highlander  with his arm around what looks like a small deer. I’ve always liked it – partly because it looks so absurd. There is a gun dangerously positioned beside the highlander’s left leg pointing upwards, (my brothers and I had to learn the ‘Never, never let your gun/ Pointed be at anyone’ rule before my father, an excellent shot, would allow us anywhere near a gun), and the figure has a horn at his waist. Why? To summon a gillie? Or does it contain gunpowder for the gun, though that seems unlikely.

And the deer might not be a deer; but it has hooves so it’s certainly not a dog. 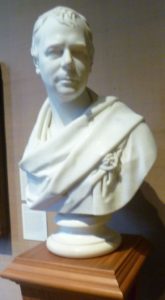 What the Staffordshire figure does show, however, is the popularity of all things Scottish in the 19th century. This came into being thanks in no small part to the poet and novelist Sir Walter Scott (1771-1832.) Scott was born in Edinburgh and went to school and university there. As a child, he fell in love with the old Border ballads, those stirring and often tragic tales of Scottish history with thrilling imagery, like these lines from ‘The Ballad of Sir Patrick Spens’: ‘They hadnae sailt a league a league/ A league but barely three/ The lift grew dark and the wind blew loud/ And gurly grew the sea.’  As a child, I loved the ‘gurly’ sea. I’m not sure what it means but it certainly sounds menacing.

Scott started writing his own stirring poetry, like Lochinvar, and The Lay of the Last Minstrel. Scott went on to write historical novels, the most famous of which is possibly Waverley, usually set in Scotland’s past – and in so doing, invented the Historical novel. In his skilled hands, Scotland’s history was thrillingly retold. 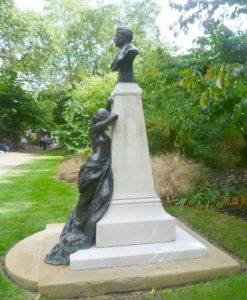 Memorial bust in Victoria Embankment Gardens, London, of Sir Arthur Sullivan (1842-1900) whose opera ‘Ivanhoe’(1891) was based on Sir Walter Scott’s novel of that name. You cannot miss the weeping female clinging to the plinth.

Scott’s novels are little read today: too long, too wordy and too much description, perhaps, but their thrilling plots have been a boon to dozens of opera composers. To take just a few; Donizetti’s Lucia di Lammermoor, from Scott’s The Bride of Lammermoor; Bizet’s opera based on Scott’s The Fair Maid of Perth; and Arthur Sullivan, composer of H. M. S. Pinafore, wrote his only ‘grand opera ’Ivanhoe’ in 1891, based on Scott’s Ivanhoe.

I have always had a soft spot for Sir Walter because he was a staunch admirer of Jane Austen’s novels.

And those of you who are railway buffs will recognize the GWR Waverley Class steam locomotives named after Scott’s novels: The Talisman, Redgauntlet, and Kenilworth, etc. I come from a railway family myself so I say this with pride. And, of course, Edinburgh’s Waverley Station is also named after Scott’s book of that name.

Suddenly, in the 19th century, things Scottish were everywhere and one might argue that it was Scott who helped the Scots to re-establish their national identity after the trauma of the Jacobite Rebellion. 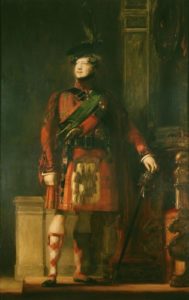 Portrait of King George IV by Sir David Wilkie, 1822, the date that the King visited Edinburgh, the Scottish capital

After Scott’s championship of all things Scottish, the Prince Regent, now the newly-crowned King George IV, and a fan of ‘the wizard of the north’s’ historical novels, visited Edinburgh in 1822 and Edinburgh went wild. The wearing of the kilt and other traditional items of Highland dress had been prohibited after the crushing of the Jacobite Rebellion in 1746. The ban was repealed in 1782 but interest in reinstating traditional dress was lacking. Now, suddenly, the kilt was back in fashion and the King let it be known that the wearing of traditional Highland dress was expected during his visit. Originally, tartan designs were attached loosely to regions and districts rather than being specific to individual clans but, in 1822, all that changed. Edinburgh tailors frantically rushed to invent new tartans for the various clans.

George loved clothes and dressing up and he took full advantage of what the kilt and all the accoutrements of sword, sporran, pistol, and red and white diamond-patterned stockings could do to enhance a man’s figure.

George was a not-so-closet Jacobite; he admired King Charles I’s undoubted artistic taste and began to collect Jacobite relics. He was in touch with Henry, Cardinal York (1725-1807), Bonnie Prince Charlie’s younger brother, and the last of the royal Stuart line. Cardinal York bequeathed him a diamond ring worn by King Charles I which had once been part of the royal regalia of Scotland.

King George IV’s attachment to the Stuarts was more romantic than political, but he did a number of practical things to restore Scottish privileges. He encouraged the use of traditional Highland dress; and he restored Jacobite peerages which had been proscribed after the ’45 rebellion. 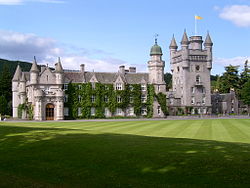 Queen Victoria and Prince Albert also picked up the Scottish baton. Queen Victoria fell in love with Scotland; it was somewhere she could be herself and not be always on show, She loved the scenery, the people and the freedom it gave her. She bought the Balmoral Estate in Aberdeenshire in 1852, and she and Albert built themselves a new castle there in 1856. She loved exploring her new estate, and it wasn’t just sedate carriage outings; we know that she was an excellent walker over rough ground. For Prince Albert, Balmoral reminded him of his childhood home of Rosenau Castle in Germany. All the royal princes wore the kilt when in Scotland and were encouraged to walk, ride, fish and shoot. 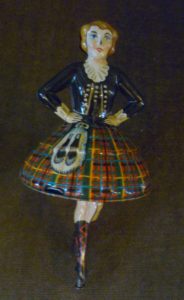 This interest in things Scottish trickled down to items that ordinary folk could afford. We have already seen the Staffordshire Highlander pottery figure. But you could also buy toys with a Scottish theme, like the tin top of a Highland lassie. Her toes rest on a protruding screw. You wind a piece of strong but thin string round and round the grooves of the screw, hold the lassie’s head in place with a steady finger and pull the string firmly with the other hand and the top should twirl round and round with the lassie’s kilt belling out. (I have to admit that this needs practice!)

And, of course, as today, one could buy tins of food items of Scottish provenance with Highland scenes on the tin. And it was easy to tell it was something Scottish you were buying because the pictures depicted shaggy Highland cattle with their handle bar horns; castles; heather-covered mountains, and stags at bay looking very like Sir Edwin Landseer’s  The Monarch of the Glen from 1851. Landseer had visited Sir Walter Scott at his home in Abbotsford and drawn the author and his dogs. He was knighted in 1850 and was often a guest at Balmoral.

As I’ve been writing this post, I’ve been struck by how the different strands have inter-connected. Sir Walter Scott’s influence is everywhere; he’s one of those people that everyone knew about in the 19th century. He knew the brilliant but dissipated poet, Robert Burns; the artist Sir Edwin Landseer, and it was Scott who stage-managed and organized King George’s visit to Edinburgh in 1822. And Albert, the Prince Consort, invited Landseer to Balmoral.

I began by writing about my Staffordshire Highlander but I’ve ended up writing about Sir Walter Scott, so, to give you a feel for the man himself, I shall leave you with a quote from ‘the wizard of the North’:  ‘We shall never learn to feel and respect our real calling and destiny, unless we have taught ourselves to consider everything as moonshine, compared with the education of the heart.’

Photos: The portrait of King George IV by Sir David Wilkie, 1822, in the Palace of Holyroodhouse,  courtesy of the Royal Collection Trust / © Her Majesty Queen Elizabeth II, 2018. The photo of Balmoral Castle is from the Balmoral Castle website.

All the other photos by Elizabeth Hawksley.

7 thoughts on “A Passion for Scotland”