On Wednesday morning, for the first time in weeks, the weather forecast predicted that the sun would shine. I was desperate for a walk, so I put on my mac, (I was still sceptical about the forecast) grabbed my camera and left the house. The sky was bright blue. Hurray! I would walk down the Regent’s Canal towards King’s Cross and visit the Camley Street Natural Park, which I’d never visited, and where I hoped to see some evidence of spring: a few ducklings or goslings, perhaps. Would it be too early for dragonflies? 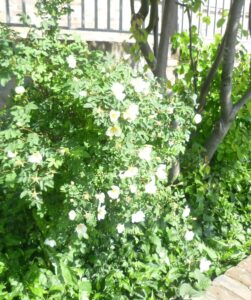 Sweet-smelling wild roses – which were almost over – had I missed spring completely?

But when I reached the canal there was nothing to be seen. No coots, no moorhens, it was completely empty. Feeling very down, I plodded on, skirting round puddles, and wondering if I should go home when, to my delight, a pair of Canada Geese appeared with a gosling. The gosling was of a reasonable size but it was the only one – what had happened to its sibs? Either the cold and wet had stopped the rest of the brood from hatching, or there were a lot of hungry predators around. I hoped there would be rather more wild life activity when I reached the Natural Park. 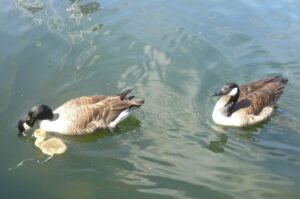 The Canada Geese with their gosling

However, when I reached Granary Square, the canal toll path was completely blocked off. Plainly the universe was against me doing any sort of Natural Park blog, so I decided to climb up a level. I found myself on Bagley Walk looking down onto the Regent’s Canal as it snaked its way north-east towards the Chilterns, and, almost immediately, I met Des, the Kings’ Cross head gardener, and Grace. 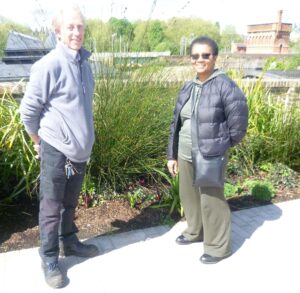 It was a great stroke of luck, and Des and Grace were happy to talk.  Des had been busy throughout lockdown keeping the all the Kings Cross gardens healthy and looking good. The Kings’ Cross development area is huge and it includes roof gardens, skip gardens (which can be moved, if needed), all the planting along the innumerable paths, the Gasholder garden, not to mention the residential area, Lewis Cubitt Park, and numerous other open spaces big and small. 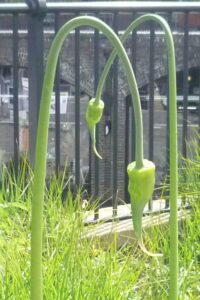 At this time of year, Des explained, there’s not much to see, flower wise; it’s more about the variety of leaves, the plant shapes and the architecture. As I looked around, I could see exactly what he meant. 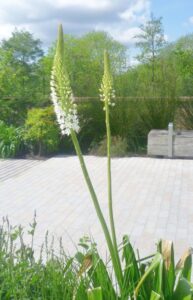 There were a few ‘statement’ flowers, like the magnificent foxtail lily above but sadly, Des told us, they were all too often stolen. Grace and I simultaneously exclaimed at the selfishness of stealing something so beautiful which meant, of course, that no-one else could admire it. Des, who’d obviously had to learn resignation, told us that he’d been pleasantly surprised this morning to see that it was still there.

We chatted for about twenty minutes (Grace and I had a ‘the horrors of computers’ chat  – where we found ourselves in complete agreement) and I learnt from Des that the Camley Street Natural Park was undergoing a complete makeover – he pointed to the new visitors’ centre which I could see on the far side of the canal, and I promised myself that I’d visit it once it was open. 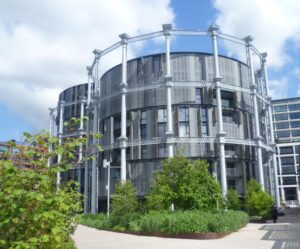 I said ‘goodbye’ to Des and Grace and set off to admire and photograph one of three Victorian gasholders which had been removed from their original positions, repaired, conserved and replaced in their present locations and which now held elegant apartment blocks inside them. A fourth, called Gasholder 8, had been turned into a garden space.

What I should have done then, was to look around the Gasholder 8 garden and take some photographs. But I didn’t. 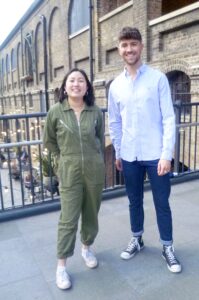 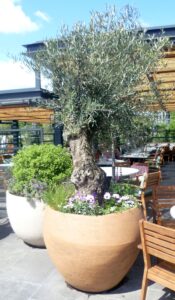 Small olive tree in terracotta pot outside one of the bars

But I learnt something else – which was typical of this walk. Once I’d got the map and sat down to look at it, I looked up Shelter, where Queenie worked. It was in Coal Drops Yard, and it described itself thus: ‘The Boutique by Shelter charity shop with a difference at Coal Drops Yard. Not only can you find designer and vintage treasures at a fraction of the original price, but all proceeds go towards Shelter’s vital work fighting homelessness’.

It was just my cup of tea! Why hadn’t I asked Queenie more about it? If I’d known all this before, I’d have gone there with Queenie.

My note to self said: visit Queenie at Boutique Shelter. The map also told me that I could visit one of the Gasholder Apartments. I’d love to do that: The location looks wonderful  – and what a view! I should have spoken to  Linda the the Visitors’ Centre about it while I was there.

By this time, I’d been wandering around  (and chatting) for about an hour and a half and I knew that it would take me half an hour to walk home. I was getting tired so, reluctantly, I made my way back to the canal. 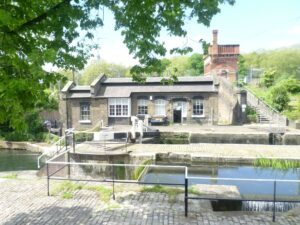 The original lock-keepers’ cottage is still in use. The red brick building behind is a Victorian water-tower.

I was about to turn homewards when I spotted a couple on the deck of a sky blue boat getting ready to cast off. Would they be going through the lock-gates, I wondered. I now realized that I’d actually missed several things I could have done, so photographing a boat going through the locks would (I hoped) make a decent final episode for my blog. I went over, introduced myself, and asked permission to photograph them. We had another chat; Jorell and Sophie said ‘Yes’, so I followed their progress. 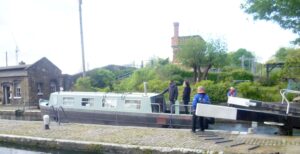 You can just see Jorell and Sophie standing together at the front; both of them are wearing dark clothes, so they are difficult to see. The lock-keepers, wearing blue jackets, are holding the heavy lock gates open. 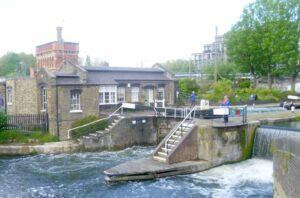 Sophie and Jorell’s boat is safely in the lock (you can just see its sky blue roof) and the water level is now almost low enough to let them out. Soon the gates would open. The boat exited in a shower of spray which completely obscured both Jorell, Sophie and the boat. By the time they became visible, all I could do wave.

I walked home, tired and rather fed up, feeling that I should have done some homework before I set out, but with a lot of mental notes on what I should do another time – and in which order. All the same, I did enjoy the conversations!

I’m delighted to announce that ‘Tempting Fortune’ is now in e-books.